3 Terrible Funds for Retirees – and a Better Buy Now

In my last article, I pointed out that the S&P 500 is far from overpriced right now. All you have to do is dig a bit deeper than first-level investors to see that this is true.

Before I get into why, let me first explain what these funds are.

VOO and SPY are passive index funds whose job is to track the market, not beat it. So if you buy them and the market goes up, you’re fine. And if you have a long time horizon—meaning you’re investing money you don’t expect to touch for 30 years or more—you’ll also probably do alright with these funds.

But all right isn’t good enough.

If you’re looking to invest for a long time horizon, you’ll have more flexibility—and make more money—with an active approach. And if you’re investing for a shorter period, VOO and SPY can be downright dangerous. Imagine, for instance, you were set to retire in late 2008. Here’s what would have happened to your S&P 500 index fund:

Snapshot of a Retirement Nightmare 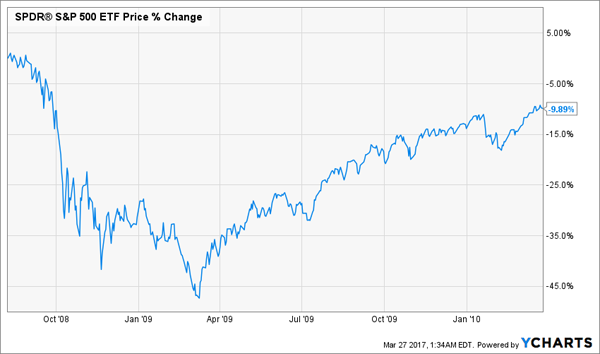 Of course, that’s what your bond allocation is for, right?

Well, yes, but keep in mind that if you have any percentage of your portfolio in bonds, you’re not really a passive investor anymore. And a mixed portfolio of stocks and bonds underperforms one consisting of 100% stocks over the long haul for just about any period in American history.

In other words, when it comes to the question of how you can retire on time during a market crash, passive-indexing fans have no answer, except perhaps to say, “Suck it up and work an extra couple of years.”

As you approach retirement, liquidity becomes a real issue. You need to have more cash on hand, or more cash rolling in on a monthly basis, so you aren’t forced to sell your holdings during a downturn. That need prompts many folks to accept lower returns in exchange for cash today, and it’s why passive-index investors suggest having a certain (and increasing) percentage of your holdings in government bonds, so you can access this cash in lean years.

This is what target retirement funds do. There’s just one problem: they’re awful.

According to US News and World Report, the Vanguard Target Retirement Income Fund (VTINX) is the best target-date retirement fund on the market. Like all target-date funds, VTINX combines stocks and bonds and rebalances the fund’s assets toward bonds over time. It’s also massive, with over $10 billion in assets.

This fund, which started in 2003, has returned 98%. Sounds good, but it’s less than half of what the S&P 500 returned over the same period, so holding this fund would have meant missing out on big gains. The fund’s return also comes up short of the total return of the Gabelli Equity Trust (GAB): 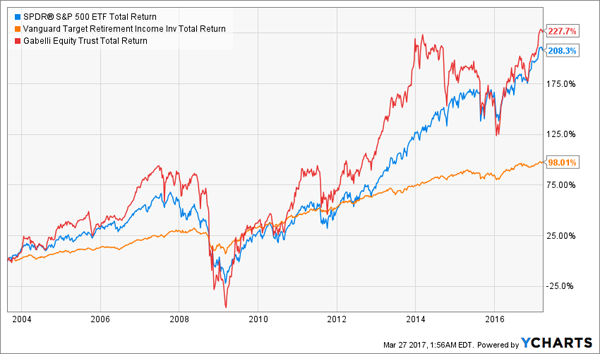 I’m not going to go on about GAB outperforming SPY over the last 15 years, but I will say that I’d be more interested in GAB than SPY, even if it underperformed by, say, 30% or so. Let me explain why.

GAB is a closed-end fund trading at a 2.1% discount to its net asset value. That’s appealing, especially since it’s a little below the fund’s 10-year average discount of 1.9%. But the real reason I’d take GAB over SPY is the liquidity. GAB pays a 10% dividend yield, versus a measly 1.9% from SPY.

If I were near retirement and wary of a market downturn, I would still have a strong income stream with GAB, thanks to those dividends. With a more conventional passive-investing approach, I would need to sell my holdings during the downturn and realize my losses. I would never be able to get those losses back, because I’ve sold the stock. Keep in mind that target funds actually give you less access to cash than buying the stocks and bonds individually, so they’re an even worse choice than SPY or GAB.

Let’s say a retiree has a $500,000 nest egg and income needs of $3,000 per month. With GAB, they would get more than that in dividend payments, so they’ll never have to sell a stock. With SPY, the retiree’s income from that $500,000 is just $1,083 per month, meaning they will need to sell $1,917 per month of SPY to get the income needed in retirement. In other words, the retiree will need to sell straight into the market downturn. With GAB, one can hold back and wait.

That doesn’t mean GAB is or was the best-performing equity fund or the best fund to hold during the crisis. But what this does show is that a combination of strategies keeping liquidity and long-term returns in mind is your best bet for a comfortable retirement.

It’s every retiree’s nightmare: watching their hard-earned nest egg get shredded as they desperately sell into a collapsing market. That’s why the strategy I just showed you—selectively buying funds that deliver upside and outsized income—is the best way to go.

The problem? Piling all your cash into the Gabelli Income Trust still sets you up for a wild up-and-down ride. Take a look at how the fund has whipsawed in just the past year: 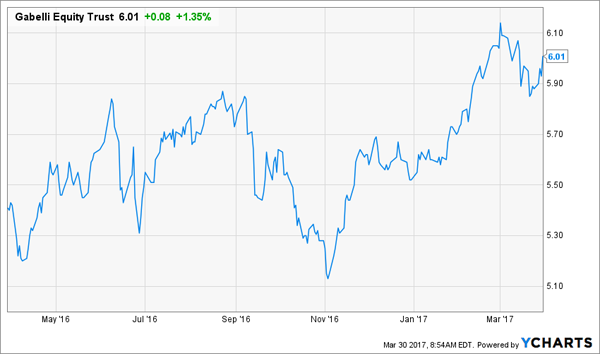 This is where our new 8.0% No-Withdrawal Retirement Portfolio really shines. It smooths out volatility by spreading your nest egg out in 6 different investments from all across the market.

One of these hidden gems even moves independently of the market as a whole, giving you an extra margin of safety.

Thousands of Americans have flocked in to take advantage of this portfolio’s steady income, upside and extremely low volatility since I launched it just a few months ago, and today is your chance to join them. All you have to do is click here to get the full incredible story and start profiting now.