Utilities aren’t safe, says Gundlach. Their valuations are stretched to the upside, and their yields are too low. So he recommends a pair trade that shorts the Utilities Select Sector SPDR (XLU), which pays a meager 3.3% today: 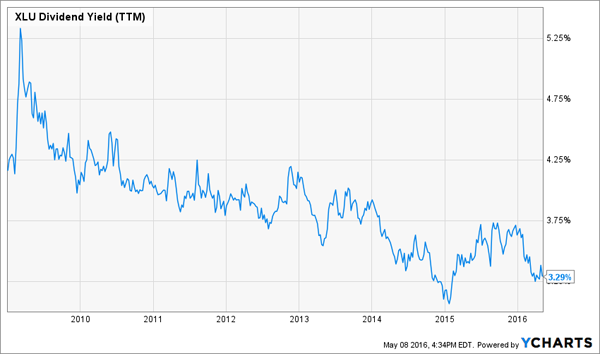 A low yield can be OK if dividend growth is meaningful, but few utilities are boosting their payouts at a fast enough pace to compensate. Of XLU’s top five holdings, only two – NextEra Energy (NEE) and Dominion Resources (D) – have boosted their dividends meaningfully over the last five years.

Two more – Duke Energy (DUK) and Southern Company (SO) – have barely adjusted their dividends for inflation. And Exelon (EXC) had to cut its dividend by 41% in 2013 after overextending itself to purchase Constellation Energy: 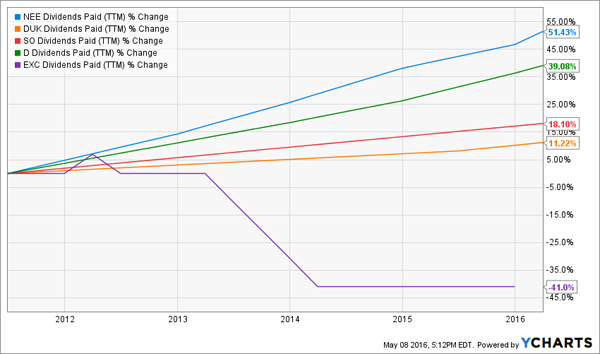 XLU also holds a 2.3% position in FirstEnergy (FE), the utility I believe is most likely to cut its dividend next. Its 105% payout ratio is not sustainable with profits declining each of the last four years. Plus, management might be too contrarian for its own good – it recently doubled down on coal!

So Gundlach recommends selling these expensive, low yield and slow growth issues in favor of some “slam dunk” income plays. His favorite buys have a contrarian flair to them – which is no surprise. Prescient out-of-favor calls are a big reason the Bond God runs $85 billion today.

At the Sohn conference, Gundlach called out the iShares Mortgage Real Estate Capped ETF (REM) as the unloved issue he’d buy opposite his utility short. I reviewed mortgage REITs two weeks ago and agree there is value in the sector.

Just as militaries tend to fight the last war, investors tend to fear the last crisis. And mortgage-backed securities (MBSs) had the lead role in the last financial crisis. They have recently been immortalized in the book and movie The Big Short. MBSs blew up the financial system in 2008 and have been outcasts ever since.

But a second-level analysis of mortgage payments shows these assets have successfully completed financial rehab. And they’re beginning to enjoy the benefits of clean living – defaults and delinquencies are down while credit scores and down payments are up.

Mortgages are increasingly being paid on time. According to data from the Federal Reserve, late payments on homes peaked above 12% in the first quarter of 2010. They’ve been steadily declining for several years now and are off their crisis levels by more than half: 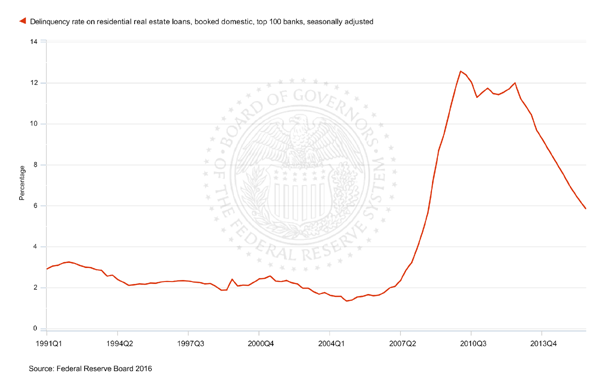 This improvement should continue. Late payments are still quite high by historical levels – more than double their pre-crisis rates. The average family has plenty of income to cover their mortgage payment.

The National Association of Realtors calculates a monthly Housing Affordability Index (HAI). A rating of 100 means a family earning the median income can qualify for an average-sized mortgage. Higher is better – a score of 120 means the median family has 120% of the income required.

Today, families are in great financial shape to buy a home and pay the mortgage – actually better than they were at any point before the housing bubble and bust! 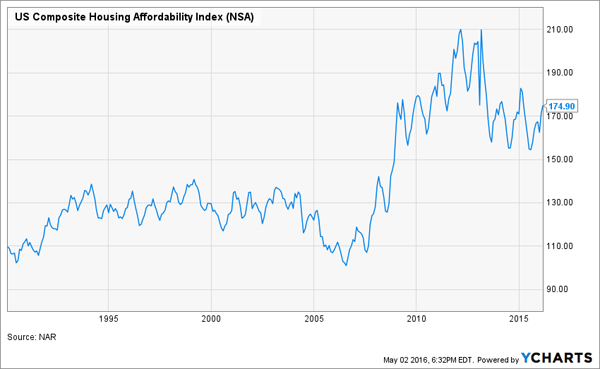 Gundlach is certainly onto something. But we can improve further on his top idea, and collect 15% upside in addition to safe 8-11% yields, simply by following his own advice.

I’m a bit more conservative – anticipating gains that are “only” between 16% and 25% over the next year. That’s still a pretty good stock tip from the world’s smartest income investor. The real kicker is, he likes these issues no matter what the S&P 500 does between now and the end of 2016.

Meaning our downside is minimal, and our 8-11% yields are safe.

The “slam dunk” investments Gundlach was referring to are closed-end funds, which have pools of shares that are fixed. And these shares trade publicly like regular stocks. So you can buy them quite easily, as you would any other stock.

I like closed-end funds because they often sell at great values. Gundlach agrees:

“Closed-ends are one of the best plays on the Fed not raising interest rates. Investors have been afraid to own them because they fear that the Fed has launched a tightening cycle.”

And believe it or not, you and I are actually in a better position than the Bond God. He can buy whatever bonds or MBSs he wants, but he can’t claim the discount you and I get when we buy a closed-end fund.

Larger funds in the space have market caps around $1 or $2 billion. That’s plenty big for you and me, but too small for Gundlach. If he started to accumulate shares, he’d move the entire market and eliminate the “free money” bargain.

You and I don’t manage billions – so we don’t have this problem. We’re free and clear to buy the bonds AND get them at a discount with high quality “closed-end funds.”

I like three in particular that Gundlach can only fantasize about buying. They pay annual yields of 8%, 8.4% and 11%. And thanks to the free money discount, you can buy them today and expect 7-15% upside within the next 12 months. Click here and I’ll share the details on these issues along with their names and tickers.