If you’re one of the many investors counting on a 7% average yearly return from your portfolio—or better—you’re putting your retirement at risk.

You’ve probably heard this 7% figure before. It’s gospel for many financial planners, and even Warren Buffett brings it up from time to time. It’s the S&P 500’s average annual return, adjusted for inflation, between 1928 and 2014.

Wrong. Because over the next several decades, we’re way more likely see average yearly returns of 4% to 6%—and probably toward the lower end of that range.

I’m not the only one who thinks so. Consulting firm McKinsey & Co. just released an alarming study saying exactly the same thing. And if you think a 2% drop isn’t a big deal, consider this: according to McKinsey, a 30-year-old today would have to work for seven more years to enjoy a similar quality of retirement.

Why the pessimism? Because as McKinsey points out, if you look back at just the last three decades, you’ll see a market and global economy driven by a younger workforce, a big drop in interest rates and massive productivity gains as technology leapfrogged ahead.

But now we’re facing the reverse: aging workers in the U.S., Europe, China and Japan, and inflation and interest rates that have pretty much bottomed out.

Meantime, S&P 500 companies are getting squeezed as nimble upstarts and big tech firms, like Apple (AAPL) and Alphabet (GOOGL) turn whole industries upside down. According to Goldman Sachs (GS), the IT sector accounted for more than half of the S&P 500’s margin expansion since 2009.

The Key to Beating Slow Growth and Retiring Rich

The tech sector’s a little pricey for my taste right now, so I’m zeroing in on a handful of bargain investments yielding upwards of 4.0%. That lets you lock in most of the return McKinsey says we should expect right out of the gate.

I’ll name two high-yielding dividend growers my proven investing system just uncovered a little further on. But first, let’s talk about two dangerous dividends you need to keep out of your retirement portfolio.

A “Steady” Stock That’s Anything But

Plenty of investors flock to Kimberly Clark (KMB) because of the tissue maker’s 2.9% dividend yield and its status as a Dividend Aristocrat (meaning it’s raised its payout for 25 straight years). But that doesn’t mean it will hike its dividend forever.

In fact, Kimberly-Clark is now paying more out in dividends than it earns, with a payout ratio of 117.4%. Worse, long-term debt is on the rise and its cash hoard is shrinking: as of the end of March, it held just $635 million, down from $1.2 billion a year earlier.

And while Kimberly-Clark reported first-quarter earnings per share that were up 18% from a year ago and ahead of consensus forecasts, the sales backstopping those profits fell flat, dropping 5% and falling short of expectations.

The main culprit was the strong greenback; half the company’s revenue comes from outside North America, setting it up for another big hit when the Fed eventually raises rates, sending the dollar higher.

Finally, the stock’s forward price-to-earnings ratio of 20.7 puts it in danger of plunging on any sort of bad news—as shareholders learned the hard way when the sales miss sliced 6% off the share price. 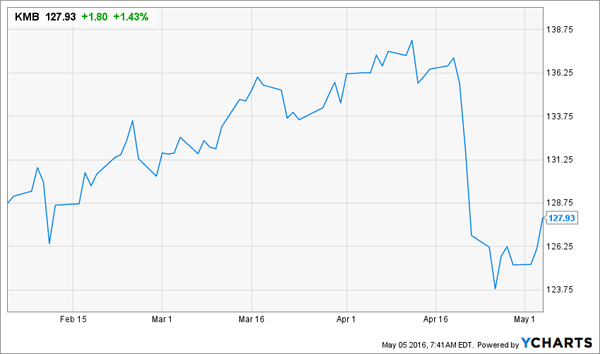 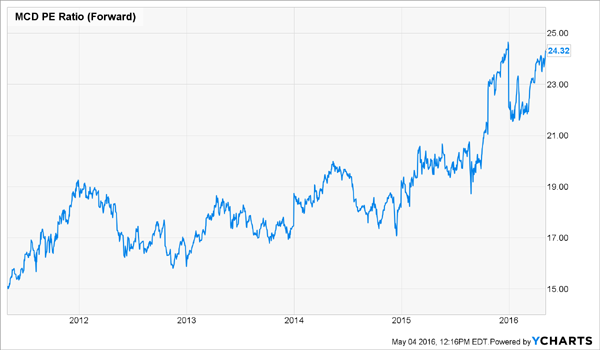 Sure, the company’s new all-day breakfast menu is a hit, but that’s now cooked into the stock. That means McDonald’s needs an encore just to validate its current share price, let alone move higher, and it’s hard to see what could fit the bill.

The pressure’s on: the company’s 71.3% payout ratio doesn’t leave much room for further dividend increases, so it will need higher profits to keep those hikes coming.

With the market now recovered from its January flop, valuations are once again stretched—but not in the auto sector. Case in point: General Motors (GM), which trades at just 5.6 times forward earnings while offering a juicy 5.0% dividend yield.

But investors, as usual, missed the bigger picture: GM has been cutting back on low-margin business, like selling to rental fleets, and focusing on more profitable retail sales. That cuts its market share, but it’s a brilliant move because rental companies buy at deep discounts, then turn around and sell the cars a year or so later, when they compete with new cars.

Meantime, GM had its best retail sales month since 2006, and its redesigned Chevy Malibu sedan is a big hit, notching a 45% year-over-year gain.

Even though Americans have been flocking to car lots, the average U.S. vehicle is still a geriatric 11.4 years old. That, plus low interest rates means easy financing and plenty of open road ahead for General Motors.

An Easy Way to Invest With the Best

My second retirement pick is the Gabelli Dividend & Income Trust (GDV), managed by Mario Gabelli, a legendary value investor who launched his first mutual fund for the general public, the Gabelli Asset Fund, in 1986. Since then, it has posted an average annual return of 11.7%.

I like closed-end funds because they can be great bargains. GDV qualifies today, trading at a 12% discount to net asset value. That means you’re getting $1 worth of assets for just $0.88—and you can look forward to a nice gain as the gap narrows.

Plus, you net a higher dividend thanks to the discount, and the modest leverage (20%) Mario is allowed to employ. He can borrow money for cheap, and juice his fund’s yield with little risk.

The result is a $0.11 quarterly dividend which yields a spectacular 7.2% annualized. GDV’s top 10 holdings include some of the fastest dividend growers in the S&P 500, including JPMorgan Chase & Co. (JPM), CVS Health (CVS), and Buffett’s favorite bank, Wells Fargo & Co. (WFC).

That’s way more than McKinsey says regular investors can expect, and best of all, these little-known funds pay monthly.

They’re perfect for your retirement portfolio because your downside risk is minimal. Even if the market takes a tumble, these top-notch funds will simply trade flat … and we’ll still collect those fat 8% to 11% yields.

It’s only a matter of time before other investors ditch their paltry 2% and 3% payers and find their way over to these “slam dunk” income plays, so the time to buy is now, while they still trade at deep discounts to net asset value.