In the energy sector, a number of companies operate as master limited partnerships (MLPs) to avoid double taxation and offer a high income yielding asset for investors to buy on the open market. MLPs were solid performers until late 2014, when oil began to fall, looking desperately for a bottom that never seemed to come.

Oil remains far below its prices earlier this decade, and it may fall again to $30 per barrel. But if oil prices drop again, the decline won’t be as aggressive as the dramatic plunge we just saw. 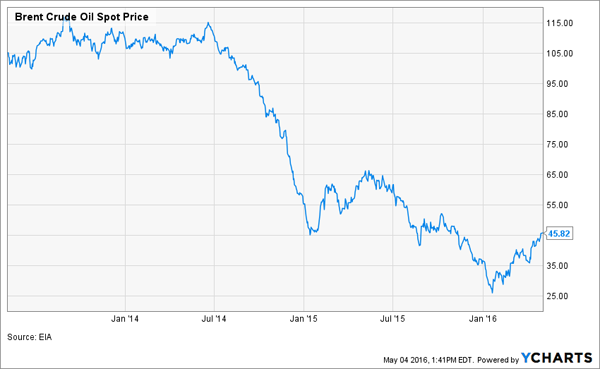 The chart continues to look ugly, but some tailwinds are likely to keep oil from falling below $30 for very long. For one, layoffs and shut wells in the domestic energy industry have already cut production capacity. Also the drop in oil has convinced a few Middle Eastern countries to focus on alternative economic drivers. Most notably, Saudi Arabia is looking to make the country independent of oil revenues by 2020. Deputy Crown Prince Mohammed bin Salman said his country will use its $2 trillion sovereign wealth fund to enact a modern economic plan that would encourage small business growth, including encouraging more women to work.

If oil remains volatile in the short term but moderates its declines, it may be time to dip into MLPs again. But which ones?

Three standout MLPs are on my radar because of their dividend history. One famously slashed its dividend by over 80% at the beginning of 2014 even before the oil crisis hit: Boardwalk Pipeline Partners (BWP) nearly halved in a day in early 2014 when its dividend fell from over 53 cents to 10 cents, caused by the MLP’s failure to earn its dividend. The stock remains down 34% since then, and the dividend has stuck at 10 cents.

Two other MLPs actually increased their dividends from 2014 to today: Enterprise Products Partners (EPD) and NuStar Energy (NS), but both stocks have suffered major declines in the last year—much worse than BWP:

A Tough Year for MLPs 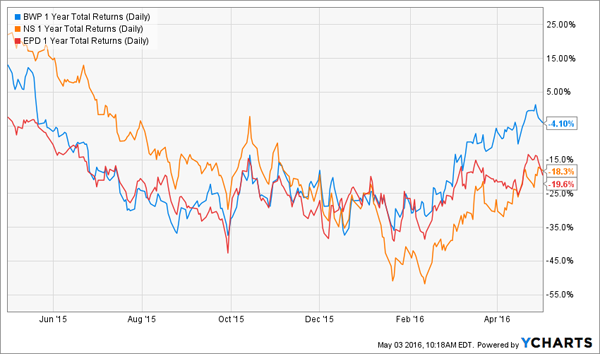 Both stocks have suffered with oil, dropping almost 20%. But both have also begun to recover in the past week, again with oil. So too has BWP.

What’s driving the rally? In addition to higher crude, the companies were simply undervalued in February. They still have positive cash flow, strong earnings per share and the ability to cover distributions. Slowly, the market has recognized this as these MLPs’ enterprise value to EBITDA ratio has risen: 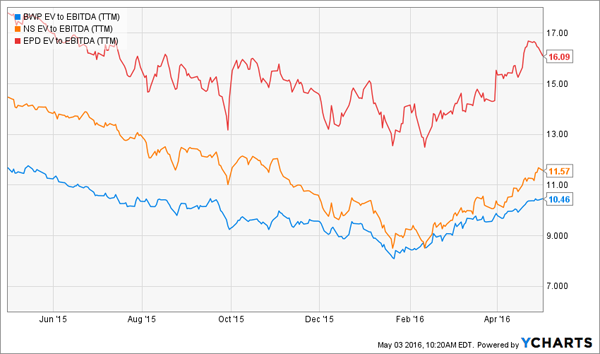 This metric is important because it identifies just how much earnings the company can produce from its current assets. Note that NS and BWP have still remained far below EPD’s EV/EBITDA, meaning that investors are paying significantly more for EPD’s ability to produce cash from operations.

NS looks risky—but it’s also yielding over 9%, meaning investors are getting compensated for that risk with a high dividend. At just 6.2%, EPD’s dividend yield is not high enough to justify the risk. And finally, BWP’s 2.5% yield is paltry, but its ample coverage means the dividend is in no danger of facing a cut anytime soon.

In summary, BWP is the safe income-producing MLP option, while NS looks to be the better speculative play over EPD. But there’s one more option to consider: a diversified MLP fund that spreads risk, offers a high yield, and provides access to cheap leverage.

The Best Buy Today: A Fund at a Discount

A few closed-end funds (CEFs) exist, with two in particular offering high dividend payouts. The Duff & Phelps Select Energy fund (DSE) offers a dividend at 12% and a year-to-date performance of over 21%. Nuveen also offers a fund specializing in energy MLPs—the All Cap Energy MLP Opportunity Fund (JMLP), which also has about a 12% distribution.

There are a couple problems with these funds. For one, both are trading at a premium. JMLP’s premium to net asset value is over 4%, although it traded at a discount for much of the last year. DSE’s premium is even higher, 10%, which means buyers of this fund are paying a lot more than the fund is actually worth. Also,  although its distribution was cut earlier this year, the fund is using return of capital to fund distributions – this can deplete a CEF’s value quickly.

My favorite CEF in this sector pays an 8% annual dividend and trades at a 15% discount to its net asset value (NAV). This means you’re buying it for 85 cents on the dollar, versus $1.10 for DSE.  (This is exactly the type of deal “Bond God” Jeffrey Gundlach pounded the table about recently.)

The fund in particular invests in electric, toll road, tower, freight, and gas sectors. It’s a one-click way to get exposure to America’s desperate infrastructure needs, and collect a secure 8% payout. It’s a favorite buy of mine, along with two more issues paying secure yields up to 10.2% and trading at double-digit discounts to boot. Click here for the names, tickers and all the details on my top 3.