The market’s reaction to Jay Powell’s “hawkish” Jackson Hole rant was interesting. He spoke for eight minutes. Stocks crashed for the rest of the trading session and have continued lower since.

Funny because I didn’t hear anything new. The mid-summer sucker’s rally was based on the hope that Powell would “pivot” early in 2023 and lower rates again.

He can’t unless the economy is really in the tank by then. Like “deep recession” bad. Otherwise, inflation is going to come back.

Larry Summers compared it to skimping on a doctor’s prescription. If you stop taking your antibiotics too soon, the infection comes back.

We already have a higher level of inflation baked into the 2020s as well as a supply crunch in energy—not to mention food. And the world is “deglobalizing” with the US bringing industry back home. All inflationary.

Does that mean all hope is lost? Perhaps! C’mon I kid (mostly), but I do believe that a hawkish Fed and continued inflation risks should inspire us income investors to demand discounts.

Only the cheapest, highest paying stocks will do. Let’s review five now.

Let’s get started by shining a light on Kohl’s (KSS), which is a cautionary tale of how even dirt-cheap stocks can still get cheaper—and more expensive, all at the same time.

Back in June, I warned about the discount retailer:

Kohl’s difficulties stem somewhat from its product mix. Namely, Kohl’s sells things—clothes, kitchenware, bedding and the like. But right now, consumers are being pulled in other directions, with some money heading toward more staples purchases amid higher food and basics costs, while other consumer dollars are heading toward what’s expected to be a monster travel season.

Fast-forward to August, and the retailer was forced to slash its full-year guidance, seeing earnings of $2.80 to $3.20 per share (down from an outlook of $6.45 to $6.85 previously) on revenues expected to decline 5% to 6% year-over-year (from flat to 1% higher previously).

Second-quarter results were impacted by a weakening macro environment, high inflation and dampened consumer spending, which especially pressured our middle-income customers. We have adjusted our plans, implementing actions to reduce inventory and lower expenses to account for a softer demand outlook.

But the biggest drubbing KSS took came on July 1, when Kohl’s announced the end of its “strategic review process”—and the end of talks with Franchise Group, which owns The Vitamin Shoppe, about its proposal to buy Kohl’s for $60 per share. 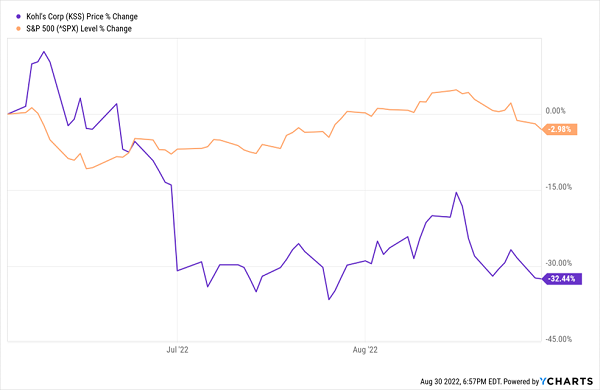 Kohl’s yield has naturally plumped up, to 7%, thanks to its sinking stock price. But at the same time, the stock’s forward-looking valuations have gotten even richer by virtue of its increasingly gloomy outlook.

Guess (GES) is a retailer that looks a little more promising, though it’s dealing with some near-term headwinds of its own.

Guess designs, markets, distributes and licenses clothing and accessories—it’s known for its denim and apparel, but it also offers handbags, watches, footwear and other products. The company sells these products via 1,064 directly operated retail stores and another 567 partner stores.

Guess’s most recent earnings report derailed the stock, and for good reason. Profits of 39 cents per share missed expectations for 41 cents, and were sharply off from 96 cents a year ago.

GES also downgraded its full-year outlook, but still expects revenue growth for the year—just slower. While the retailer forecast 4% expansion in sales for fiscal 2023 in May, it brought that estimate down to just 1.5% in August. Currency (namely, a stronger U.S. dollar) is the biggest headwind, however. On a constant-currency basis, Guess expects 9.5% revenue growth, down just a hair from its previous forecast of 10%.

Retail can be fickle, but fashion retail especially so. That’s why stocks like Guess are typically better as swing trades—and at least from that perspective, an already cheap GES could be irresistible on a deeper dip.

The same goes for American Eagle (AEO), which has been a particularly volatile stock of late.

Now, These Are Price Swings 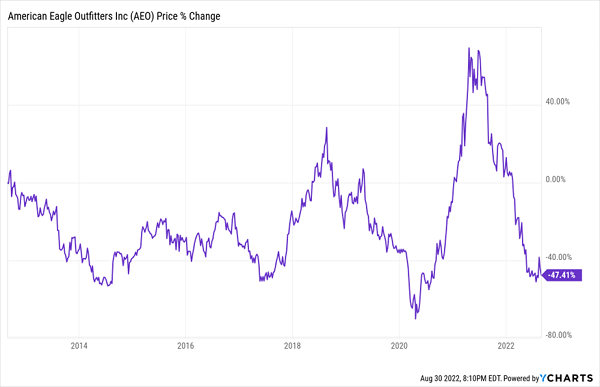 American Eagle is a largely teen-focused retailer who sells its wares at more than 1,100 stores in the U.S., Canada, Mexico and Hong Kong, as well as in more than 200 international locations operated by licensees in 24 countries.

AEO faces the same difficult environment as most fashion retailers—heavy promotions every which way, not to mention higher material and shipping costs. But an eventual, gradual shift back toward “stuff” from “experiences,” once people scratch their post-COVID itch, should make American Eagle shares more productive.

Until then, dips are your friend.

We might have better luck with a different type of retailer: namely, furniture.

Yes, homebuying, home furnishing, home improving and anything having to do with homes had its heyday during the peak of the COVID pandemic, when a mass exodus out of the office and into their houses. And while we’re largely behind that trend—well, homebuying is still brisk, and people apparently still have rooms to fill.

Wall Street Loved What They Saw, But Both Are Caught in a Downdraft 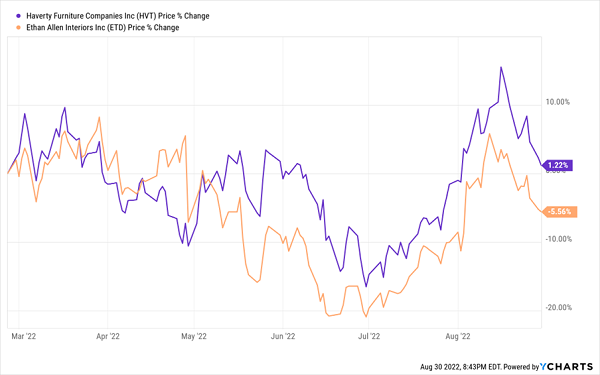 Haverty, which has more than 100 showrooms across 16 states, delivered 5% earnings growth and best-ever Q2 sales of $253 million—the company’s seventh consecutive quarter of record revenues. What’s attractive about Haverty is that its fortunes aren’t just based on COVID buying, but a strategic pivot:

We’ve changed our business model since pre-COVID,” CEO Clarence Smith said in the Q2 conference call. “Our store count and retail square footage is level with 2019. However, our productivity measured by sales per employee is up 61%, because we’ve been able to deliver more sales volume with fewer team members compared to 2019.

Meanwhile, Ethan Allen, which has a much larger footprint with 300 stores in the U.S. and abroad, delivered a massive final quarter of its fiscal year that saw sales jump 29% to $229.7 million, and EPS rocket 73% to $1.23, a quarterly record. Annual revenues were up 19%; earnings popped by 71%.

Ethan Allen, like Haverty, is building many of its own successes. The company’s Virtual Design Center, launched this year, has enabled it to grow revenues rapidly with a much smaller sales staff. Meanwhile, new product lines geared toward younger customers are also gaining traction.

HVT and ETD’s sustained stellar results have translated into significant special dividends over the past couple years—and therein lies the only hitch. Their regular dividends are closer to 4% and 5%, respectively, rather than the 11% and 7% headline yields that are skewed from the specials.

The flipside? Their regular dividends have been on the rise for years, too.

The Perfect Recipe for Decades of Sky-High Dividends

A September swoon could be a perfect recipe for investors to grab a few stocks they didn’t get during the first leg of this downturn.

But if you’re really itching to lock in the foundation of your retirement account, a few of the market’s best high-yield dividend names are already—temporarily— back in “BUY NOW!” territory.

My “Perfect Income” portfolio features some of the most generous, yet stable, dividend investments I’ve found. The only problem: In normal market conditions, they tend to trade at lofty valuations thanks to their clear performance potential. But every now and again, when the market throws a fit, Wall Street throws the baby out with the bathwater and gives us a chance to buy even more on the cheap.