The Next Recession: When It Will Happen and How to Prepare

I’ve been thinking a lot about recessions lately.

It’s pretty hard not to, because warnings about recessions are coming from financial pundits and big banks with increasing frequency. Most recently, an economist at Citigroup warned in a research note that a recession was likely to come in the next 18 months, because the US Treasury yield curve is flattening.

This person isn’t a lone wolf.

Many economists, including a lot of wonks at the Federal Reserve, are fiercely debating whether our flattening yield curve is a sign that a recession is around the corner. And the fear is intensifying, since the difference between the yield on the two-year and 10-year Treasuries is a meager 25 basis points, the narrowest in over a decade.

This panic isn’t new—and it’s exactly wrong. For instance, Morgan Stanley was warning investors that a flattening yield curve was a serious risk back in 2015, meaning, in their view, that a recession was likely in the next couple years.

The economy’s improving growth shows that we aren’t anywhere near a recession, and, as I wrote in a June 20, 2017, article, it signals a great time to buy stocks. (The S&P 500 is up 17% since that article was published.)

Nights follow days at regular intervals governed by the laws of physics. Recessions follow expansions because of human nature, and human nature is impossible to predict. Sharma’s grave warnings from two years ago prove the point.

Where does the seven-year myth come from? Recent history.

In 1969, 1990 and 2008, there were three recessions that were about seven years apart. We also saw a 2001 recession that came a decade after the previous one—near enough to seven years if you’re not looking too closely.

But that’s a misleading selection because we also saw recessions in 1973, 1980 and 1981 that weren’t anywhere near seven years after the preceding one. You could try to fudge the numbers to make them fit, but an even closer look at history shows just how foolish that would be.

Let’s take a look at the full list of every recession in US history.

In America’s near 250-year history, there has been no shortage of crises and panics. But the good news is that they’re getting further apart. It’s almost as if the economy is getting more efficient and businesses are getting better at avoiding downturns.

If you lived through 2008, you probably wouldn’t think that things are getting better, but they are. As bad as that crash was, we didn’t have bread lines like we did in the Great Depression; we didn’t have homeless camps in Central Park; and we didn’t have food riots like the Flour Riot of 1837 in New York City.

Of course, things aren’t perfect nowadays, but our downturns tend to be more measured, more controlled and further apart. Take a look at this chart of each recession in US history and the time that elapsed since the previous one:

Notice how the lines tend to get longer over time? That’s because we’re getting smarter about capital markets, fund flows, business cycles and ways to cushion the economy when things get really bad.

That doesn’t mean recessions are destined to happen every seven years, but it does mean that we can expect recessions to be spread even further apart in the future. Maybe someday, recessions will even stop happening altogether.

Life in the Slow(er) Lane

It’s now been nine years since the Great Recession officially ended in June 2009. That isn’t the longest gap we’ve had between recessions (that award goes to the post–dot-com recession of 2001), but I’m betting that the next recession won’t happen until it’s been a bit more than 10 years since the last one ended.

There are a number of reasons why I think the next recession is pretty far off, but they all come from the same starting point: the slow recovery we’ve seen over the last nine years.

Whether you call it “the new normal,” as ex-PIMCO bond genius Mohammad Al-Arian does, or you prefer “secular stagnation,” as Harvard professor and ex-presidential advisor Larry Summers does, everyone has noticed an uncomfortable truth about our economy since the Great Recession: it’s been recovering at a glacial pace.

That slow improvement has resulted in a delayed business cycle and slow growth in consumer spending. It has also caused overall wage growth following the recession to rise at a very slow rate—though it is now starting to increase significantly. That’s not a recessionary trend, but it isn’t a bubble either. It’s ho-hum.

And ho-hum is likely what we’re going to see for a few years to come. Again, not great, but not a recession either.

What does ho-hum mean for investors? It means lower returns—but no major downturn.

Slowly, investors have begun to realize that this is a good reason to buy stocks. If you’re going to get lower average annualized returns over the next few years and you’re not going to get a major downturn anytime soon, that means it’s a really good time to buy stocks—especially since many are oversold due to fear mongering and too many individual investors keeping their cash out of the market.

(You could start with the 10 dividend stocks my colleague Brett Owens says are set to double. Click here to read all about them.)

Most retail investors haven’t gotten the memo that this is the new reality of investing, but the stock market has. Take a look at the volatility index known as the VIX. Called the “fear gauge,” this is an indicator of just how scared the market is of a major downturn in the near future. And its average has been trending down ever since the financial crisis began: 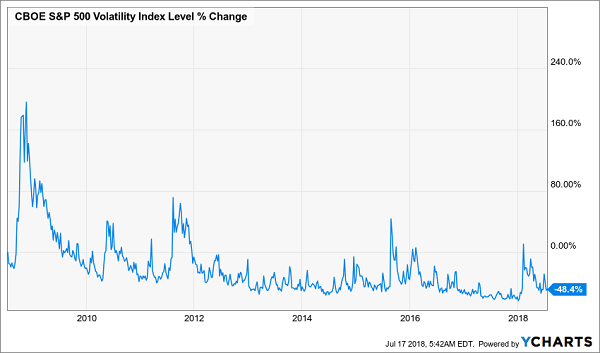 Despite the headlines about volatility rising earlier this year, fear is still going down over the longer term because the market is continually realizing that there are too many safeguards in place, too many checks and balances and too much at stake in the new world economy to let another 2008 happen. That doesn’t mean it won’t, but it does mean it won’t anytime soon.

And without a recession, there’s not going to be a bear market in stocks in the short term, meaning investors need to buy now and watch their portfolios grow. The only trap in today’s new normal is sitting in cash on the sidelines, where rising inflation will eat up your net worth.

The 4 Best Buys for the Next 2 Years—and Beyond

You can give yourself a BIG edge over other investors with the 4 fund picks I’ve just discovered. That’s because they pay an outsized average dividend yield of 7.1%!

That means—on dividends alone—you’re far ahead of what most people will earn in the years ahead. And we haven’t even talked about price gains yet; you can easily expect those to clock in at 20% or more in the next 12 months, no matter what the economy does!

How do I know these 4 stealth fund picks about to skyrocket?

Because all 4 trade at ridiculous discounts to their true value—and when they snap back to their historical norms (practically guaranteed, in my view), we’re looking at baked-in 20%+ gains here—easy!

And before you ask, these 7.1% payouts are safe. Each of my 4 fund picks is headed by whip-smart management teams that are bringing in more income than they need to cover those fat dividend payouts.

Let’s grab a piece of the action NOW, before the market comes to its senses on these 4 low-key income wonders. CLICK HERE and I’ll tell you everything you need to know about these 4 incredible funds, including their names, tickers, buy-under prices and more.