These 7%+ Dividends Are Growing 10%+ Annually

Many investors think they must choose between income and growth.

Why not have both?

Many stocks offer varying degrees of growth and income, and in a few rare cases – such as the three stocks yielding between 7% and 9% that I’m going to share with you today – they offer high levels of both.

When we talk about “growth,” we can mean any number of metrics. It can be as simple as sales, but that’s far from the only metric that matters.

The growth I want to look at today is on the bottom line. A company can grow sales all day by spending inordinate amounts of money on marketing and R&D. But an established company needs to be able to squeeze profits from those revenues – especially if they’re going to keep paying dividends that are three or four times the market average.

After all, high yields are worth nothing if they’re going to disappear in a year or two.

Here’s a look at three stocks that yield at least 7% that analysts believe will grow the bottom line by 10% or more in the coming year.

When you think of large transportation equipment such as airplanes, or infrastructure such as railroads, you tend to imagine a single company simply owning those things for its own use.

But that’s not always the case, as Fortress Transportation and Infrastructure Investors LLC (FTAI) would attest.

The company also is an active acquirer. Its deals include the likes of a $50 million purchase for most of the assets of Hannibal Development Partners – which owns strategically located land that FTAI may use to build a power plant or natural gas liquids terminal – that closed in June 2017.

Fortress has been a growth dynamo on the top line, tripling revenues between 2014 and 2016, and Wall Street projects 50%-plus sales growth for both this year and next. But what’s important is that FTAI is actually profiting from that growth – the company is expected to flip from an 11-cent-per share loss last year to a 17-cent profit this year. Analysts then see a breakout to 83 cents in per-share earnings in 2018.

That should help bring along the company’s distribution, which it started paying soon after its 2015 IPO. At 33 cents per share, that’s a 7%-plus yield – and once profits start flowing regularly, a distribution hike could be in order.

I only wish Fortress weren’t an LLC – right now, you do have to deal with the K-1. But that’s a small price to pay for the explosive growth potential of this extremely niche but lucrative opportunity. 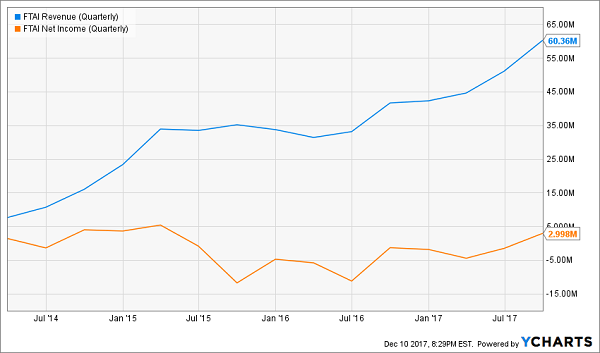 AllianceBernstein (AB) is a global asset management firm that has a New York City postal address, but is majority-owned by France’s AXA. The company provides investment management services and has more than $540 billion in assets under management – mostly across its mutual funds and closed-end funds – but it also provides valuable investing insights via its long research arm.

The company has benefited from additional investor interest thanks not only to the thriving U.S. market, but bullish activity across the globe – just more than a third of its AUM comes from investors domiciled outside the U.S. So far this year, net inflows have jumped by $13.5 billion. President and CEO Seth Bernstein pointed out in the third-quarter earnings call that the company had the “highest estimated fee base in our institutional pipeline at quarter end that we have seen since we started tracking this number five years ago,” and that in that same time frame, adjusted operating margins had come up 6 percentage points.

Analysts are upbeat about the company’s prospects going forward, with a consensus estimate of mid-single-digit top-line growth next year turning into an 11% boost on the bottom line. Citi’s William Katz is particularly optimistic, upgrading AB to “Buy” in October and raising his price target from $26 to $31 – another 20% higher from current prices.

Just one note: While AB does pay out quarterly, the payout does fluctuate by a few cents per share from one period to the next. However, the annual total has been in an upward trend for years, and 2017’s dole should finish higher than 2016’s.

If distributions and K-1s are an absolute turnoff, fear not – we have a real estate investment trust (REIT) up next.

Sabra Health Care REIT (SBRA), at just $3.4 billion in market capitalization, doesn’t have quite the size of the likes of Welltower (HCN) or Ventas (VTR). But this senior care-focused REIT did add a little bit of muscle weight in August 2017, when it completed its acquisition of Care Capital Properties.

What Will CCP Do for Sabra’s (SBRA) Operations? 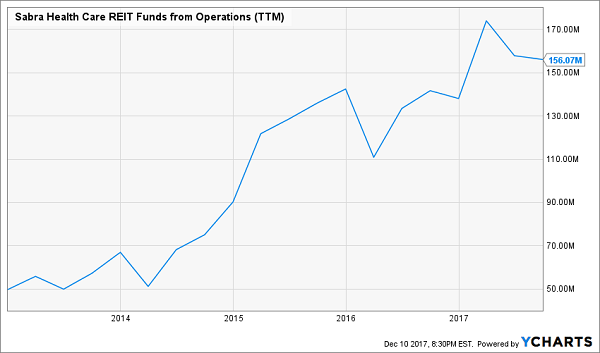 Sabra now boasts 530 real estate properties across the U.S. and Canada, with the majority of that (409) in skilled nursing/transitional care, with another 88 senior housing communities, and a sprinkling of other healthcare assets. The company also owns other investments, including loans receivable and preferred equity, connected to the healthcare space, of course.

SBRA shares have taken quite the hit in 2017, in part amid the uncertainty about and investors’ less-than-unanimous faith in the CCP merger. That wasn’t helped any by a poorly communicated prorated quarterly dividend issued after the merger – but Sabra reassured investors by not only paying the remainder of the previous quarter’s dividend, but hiking its regular payout from 43 cents per share to 45 cents.

Rather than waiting for Sabra to turn its fortunes around, there are two REITs I like even better that are ready to hand you huge upside in the year ahead.

One recently raised its dividend again by 4% over last quarter’s payout. This marks the 21st consecutive quarterly dividend hike for the firm: 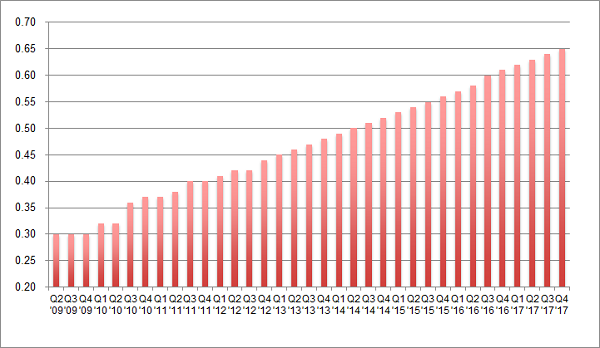 It pays an 8% yield today – but that’s actually an 8.4% forward yield when you consider we’re going to see four more dividend increases over the next year. And the stock is trading for less than 10-times funds from operations (FFO). Pretty cheap.

However, I expect its valuation and stock price will rise by 20% over the next 12 months as more money comes stampeding into its REIT sector – which makes right now the best time to buy and secure an 8.4% forward yield. 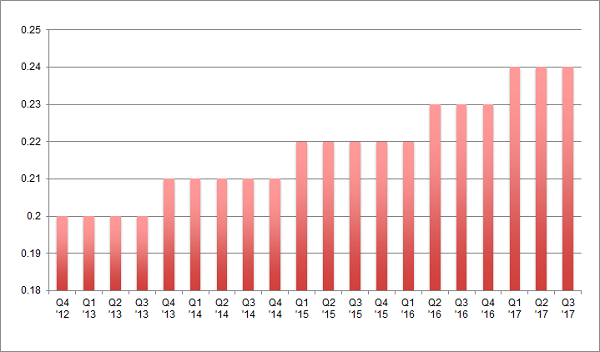 Click here and I’ll send my full 8% No Withdrawal Portfolio research you to right now.