Today I’m going to show you the 3 best closed-end funds of 2017—and reveal a surprising prediction for each of these powerhouse CEFs in 2018.

More on these 3 winning funds in a moment. (And if you’re unfamiliar with CEFs, click here for a full primer on them.)

The Year That Was in CEFs

In CEFs, the biggest winners of 2017 had a lot in common, and that made it easy to separate the losers from the winners, because the whole market seemed to agree on 3 things:

These are the key reasons why the biggest CEFs of 2017 were either foreign funds or tech funds—starting with the year’s #1 performer.

Winning CEF #1: A Tech Fund With Big Gains Ahead

The year’s best performer was the oft-ignored BlackRock Science and Technology Trust (BST), which jumped a monstrous 58.8% in 2017, more than any CEF tracked by CEF Insider. Here’s how it performed in relation to our other 2 winners (see the blue line below). 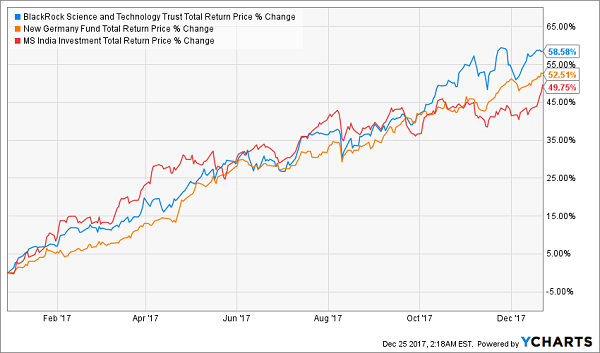 Why such a great year for tech? For one, 2016 was not a strong year for tech stocks. After Donald Trump won the election, investors rotated out of tech and into finance stocks, stalling the performance of the NASDAQ—represented in the blue line below by the PowerShares QQQ ETF (QQQ)—after Election Day. 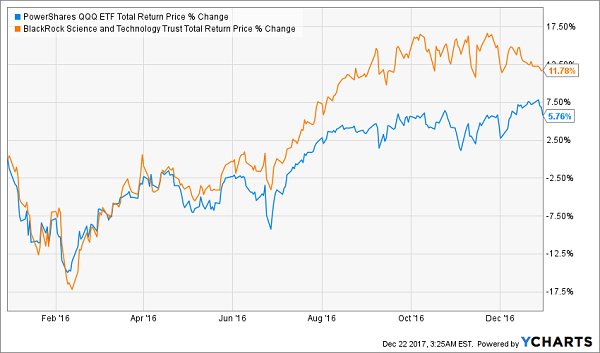 Note that BST still crushed the index in 2016 and nearly doubled up QQQ, despite all the noise you hear about human fund managers constantly losing out to the index (this just is not true!).

BST’s savvy management team has been crushing the market for 3 years, and, like I said in June, the fund’s run-up is just getting started.

I don’t think anyone expected the New Germany Fund (GF) to wind up the second-best CEF of 2017. An unpopular fund with income investors, GF pays a small end-of-year dividend and pays nothing throughout the year. In 2017, its yield will be 4%, which is about half of 2016’s much more generous payout.

But if gains are your goal and you can ignore the weak income stream, GF is for you. Not only is it well managed, but German assets are an ideal mix of low risk and high growth. Germany’s GDP has accelerated to 2.8% growth, and the country is seeing the most peaceful and prosperous period since the eurozone began in 2002.

It’s no surprise that GF would jump in 2017, but even Angela Merkel would admit that a 52.6% increase is beyond her wildest dreams:

A Monster Return from Deutschland 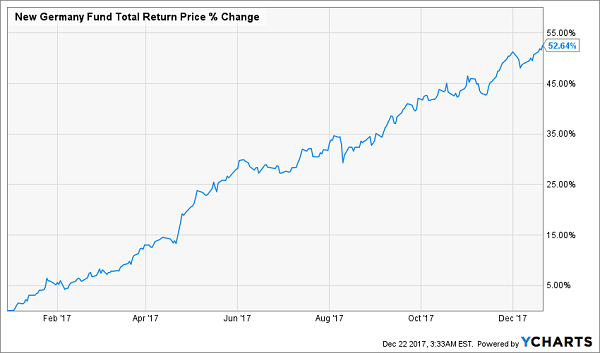 I think Germany will continue to shine in 2018, thanks to a more stable EU, an influx of capital from Britain due to Brexit and a continually weak US dollar (which makes euro-denominated German companies stronger), thanks to Trump’s tax reform. So GF’s monster run may not be quite over yet.

China gets all the headlines in America, but the real growth story is in India. China’s breakneck GDP growth has transformed it into an economic powerhouse with a fast-growing middle class, with megacities boasting glistening factories and industrial output that rivals any other nation in the world.

India, on the other hand, hasn’t experienced its growth spurt yet. A more decentralized economy, a more diverse population and less foreign investment have kept the country’s GDP gains limited for decades.

But that’s all changing, and it’s changing fast. India’s prime minister, Narendra Modi, is the most popular leader the country has had in decades, and he’s been successful in passing some radical reforms that are helping the economy grow at a breakneck pace.

Investors are learning from history, which is why they are jumping into the Morgan Stanley India Investment Fund (IIF):

India Storms to the Front of the Line 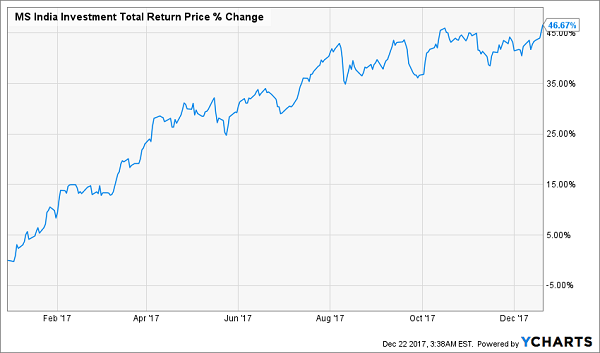 You can see that it’s been an unstoppable year for IIF, but I’m more confident in this fund’s momentum in 2018 than I’ve ever been.

For one, there’s the India growth story and the relative tranquility in the region (I say relative—south Asia has always been a volatile place, but things have gotten quieter lately). But the other reason is much more subtle—and very CEF-specific.

Back in October, I pointed out that short-sighted activist investors were forcing another great Asia-focused fund to shut down. Their timing couldn’t have been worse, because it’s clear that growth in Asia is far from over.

But that move (which was successful—the fund in question, the Thai Fund, is sadly no more) is just the tip of the iceberg. Activists are going to go after more Asian funds and get them to shut down, too. That means more demand for funds like IIF is almost a given.

Of course, I can’t blame the activists. IIF trades at an 11.5% discount to its net asset value (NAV, or the market value of the holdings in its portfolio). This means that if an activist investor could force the fund to liquidate, they’d get an easy 12.8% return on their investment, as they’d get IIF’s NAV on closure, not its discounted market price.

Since IIF only has $591.7 million in assets under management, it would be pretty easy for a hedge fund with $20 billion or so to come in and force a liquidation. Now is a great opportunity to get there first.

There’s only one drawback with buying these 3 funds now—their dividends are pretty weak by CEF standards.

IIF, for example, recently announced a massive 13.2% special dividend, which sounds amazing … but that’s unusual for the fund (last year, its special dividend was less than 3%).

As I mentioned above, GF’s recent distribution is almost 4%, about half the payout in 2016. And I think even that 4% is unlikely to be repeated this year.

Heck, even BST’s 5.8% yield might not be enough for some folks.

Thanks to these 4 powerhouse funds’ safe—and growing—8.1% average dividends, they hand you a far bigger slice of your profits in CASH, rather than paper gains that can vanish overnight—especially in wobbly sectors like technology.

The four 8.1% yielders I’ll show you when you click here also keep your nest egg safe thanks to two other unbeatable advantages:

You owe it to yourself to take a look at my 4 top CEFs for 2018. And best of all, you can check them out with no risk and no obligation whatsoever. CLICK HERE and I’ll share these 4 funds’ names, tickers, buy-under prices and everything you need to know before you buy.