Today I’m going to show you why some funds are killing the S&P 500—and how you can dramatically boost your odds of doing exactly the same thing.

One way not to do it is by investing in a dying asset class: traditional mutual funds. Since most mutual funds have underperformed the market, the number of funds out there has flat-lined, while the number of exchange-traded funds (ETFs), mutual funds’ low-cost cousins, keeps exploding. There are now about 2,000 ETFs on US exchanges, and they account for about a third of all US trading.

But as I wrote on February 21 (and have said many times since), I don’t recommend you join the ever-growing crowd of ETF fans, either.

Instead, we’re going to fish in a small, obscure corner of the market most investors don’t know about: closed-end funds (CEFs). Like ETFs, CEFs trade on exchanges; and like mutual funds, they pool money from a variety of investors and use an active manager who attempts to rack up market-beating returns.

At my CEF Insider research service, we track the performance of some 500 closed-end funds with a combined value of about $300 billion. Many of them are destroying the S&P 500. In fact, the average CEF is beating the index by a margin of about 30% or more: 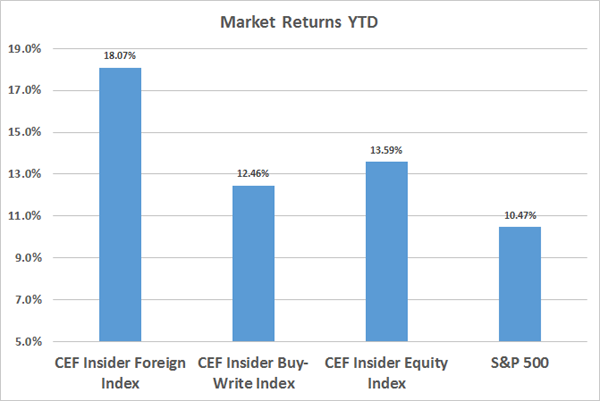 Let’s break this chart down.

Off the top, we’re seeing 2017’s market-price returns for CEFs across three categories. The first covers international funds (Asia, Europe, emerging markets, etc.). The second invests in US stocks but also buys and sells options on them. As my colleague Brett Owens has written before, a conservative option strategy can actually make a portfolio less risky than the S&P 500. The third category focuses solely on US stocks.

The obvious takeaway? Each of these groups is beating the S&P 500 by a lot.

To get a better sense of what the gap between those two yields really means, consider this: a $500,000 investment in the S&P 500 results in $788 in monthly income. Put that in CEFs and you’ll get an average $2,667 per month in cash. That’s the difference between a livable income and abject poverty.

Now let me point you in the direction of some of the best-performing CEFs so far this year. To make things as fair as possible, I’m going to focus on US stock funds that emphasize mid-cap and large-cap companies, just like the S&P 500 does, so we won’t be shouldering more risk to beat the index.

For instance, take the best-performing US stock fund of 2017—the Liberty All-Star Growth Fund (ASG), which is up 21% year-to-date. How did this fund destroy the market? Simple—it has a bunch of FAANG stocks—an acronym for tech juggernauts Facebook (FB), Apple (AAPL), Amazon.com (AMZN), Netflix and Google (GOOG), the latter of which is now known as Alphabet.

ASG also holds other strong outperformers, such as its top holding, IPG Photonics (IPGP), which is up over 46% year to date. 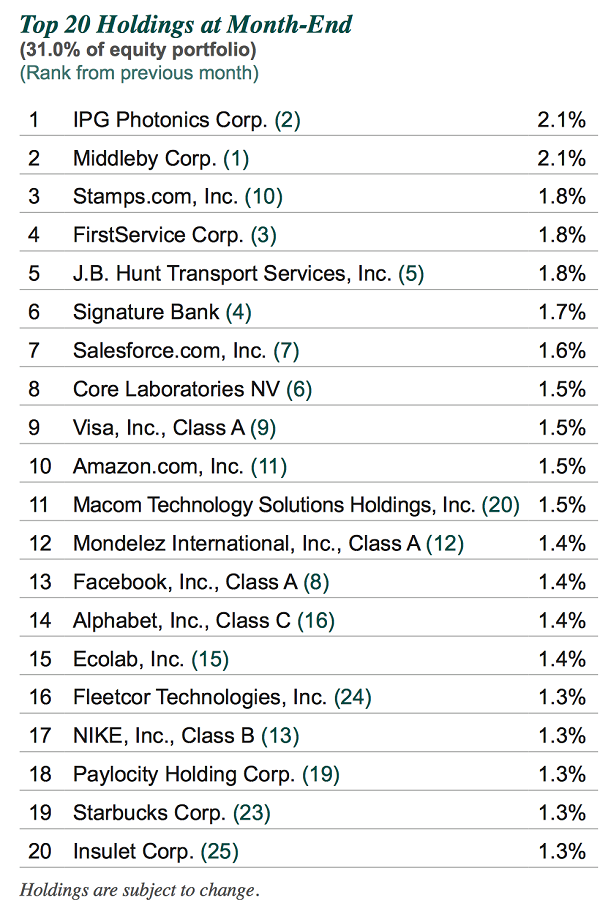 Never heard of IPG Photonics? Don’t feel bad—not many people have. While the Liberty All-Star Growth Fund’s blue chips steal the spotlight thanks to their brand recognition, this company, a maker of diodes and industrial lasers, goes unnoticed. That’s too bad, because IPGP boasts a 36% operating margin and first-quarter revenue that jumped 37% year over year.

But ASG’s management team does know IPGP, along with other top-notch companies, and that deep market knowledge has resulted in a fund that’s crushing the market.

The same goes for the Nuveen Tax-Advantaged Dividend Growth Fund (JTD), which is up 20% year to date. But Nuveen is playing in far more familiar territory; its top 20 holdings are all instantly recognizable to most Americans: 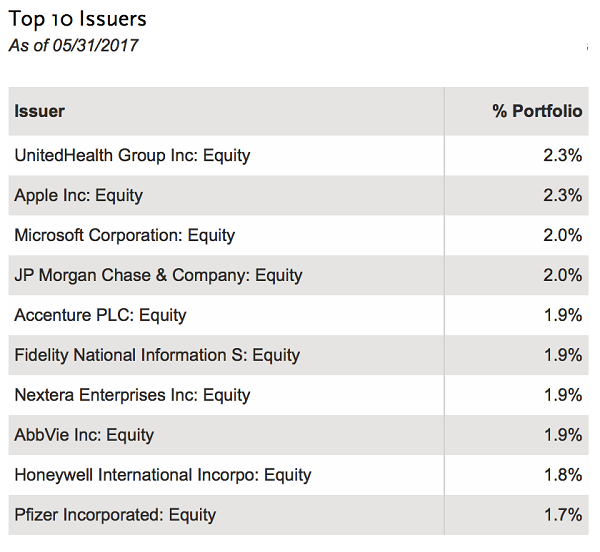 You’ve probably heard of UnitedHealth Group (UNH), the health-insurance firm with a $178-billion market cap that saw its net profit margin rise over 17% in the first quarter. But did you expect an insurer to jump higher amid regulatory uncertainty, increasing calls to cut Medicare and Medicaid funding and a growing chorus of politicians pushing for lower health-insurance premiums?

Not only are ASG and JTD beating the market, they’re handing a ton of cash over to shareholders at the same time. ASG’s dividend yield is 8.2% and JTD’s is 7.7%. Buy both of these funds with $500,000 and you’ll get a $3,312 monthly income stream. That’s a comfortable retirement in much of America.

Market-beating returns and high yields are why investors have begun to take a closer, more serious look at closed-end funds. They’re also why CEFs are beating the market—and why they’ll probably continue to do so.

Even so, before you put a penny into these two CEFs, you should heed the old financial standby: “Past performance is no guarantee of future results.”

To tell you the truth, I’ll be shocked if either of these two funds is still outperforming a year from now.

The fact is, while both are off to hot starts this year, they’re starting out the next 12 months in a big hole, because each one is overpriced, though you might not notice it at first.

Let’s look at one of the most important numbers you need to know when picking CEFs: the discount (or premium) to net asset value (NAV), or the value of their underlying assets.

Problem is, this fund usually trades at an 11.3% discount, meaning the gap between its market price and its “true” worth is likely to widen … and act like a lead weight on the share price!

JTD is even worse, trading at a 4.8% discount to NAV when that number is usually around 8.7%.

I’m sure you see where I’m going here: the last thing you want is to be caught in the downdraft when these funds snap back to their “regular” discounts.

That’s why I’ve just released a new FREE report that gives you just the opposite: 4 bargain CEFs set correct to the upside—I’m taking gains of 20% (or more) in the next 12 months alone!

Oh, and you’ll be collecting a nice 7.5% average yield too, so your real gain is closer to 28% here, with a nice chunk of that in cash!

Best of all, you’re still getting some reassuring past performance. My No. 1 pick ticks off all my boxes: