These Turbo-Charged Dividends Are Growing by 10% – 24%

Firms increasing their dividends in 2020, of all years, are sending a powerful “payout confidence” signal to Wall Street:

Our dividend is safe—so secure, in fact, that we’re hiking it. Watch our stock price follow.

The bigger the increase, the greater the level of confidence. In a minute, we’ll investigate five of these dividend buy signals.

S&P Dow Jones Indices’ Howard Silverblatt writes that there were 309 dividend increases during the third quarter, versus 102 declines—better than the 244 versus 639 “upside-down” split from Q2. (Though we’re still grading worse than this quarter last year, when 426 firms raised and only 94 cut.)

Why are dividend hikes worth watching? Investors tend to chase dividends higher over time. Let’s look at a few notable names—as their payouts have soared, so have their stock prices: 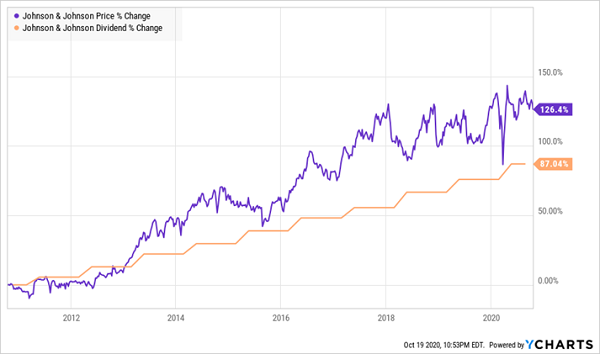 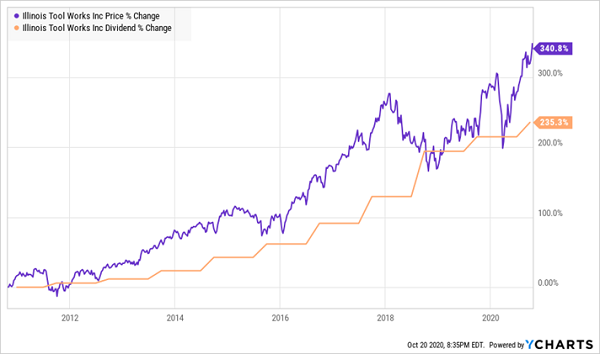 JNJ was able to achieve 126% price growth on a dividend that nearly doubled (+87%) over the last 10 years. If we take away the progression of that payout, we would likely have taken away much of the “fuel” that powered JNJ’s price higher.

Meanwhile ITW hiked its dividend faster (235%), and its price soared nearly three-times as much as JNJ (340%). This simple example illustrates that the surest way to higher prices in the stock market is finding the stocks that are hiking their dividends the fastest.

JNJ is a pretty good raiser for a blue chipper. ITW is better, partly thanks to the fact that it isn’t a conglomerate already active in a million markets.

The “law of large numbers” works against JNJ, but these firms are still growing their dividends (like ITW, by 10% or more annually!) off a smaller base.

So let’s dig into five firms that have announced aggressive double-digit dividend hikes—I’m talking between 10% and 24%—with stock prices that are poised to follow.

Financial stocks are, if nothing else, certainly dirt cheap at the moment. And here are a couple of firms that have raised their payouts by 10% or more in recent months:

These two stocks managed to produce two of the sector’s best payout hikes in months. But they serve as a prime example of why dividend growth is just a buy signal, not a confirmation. These great “payout fundamentals” haven’t (yet) helped these stock prices.

Financials Have Been Thrashed … OZK and AFG More Than Many 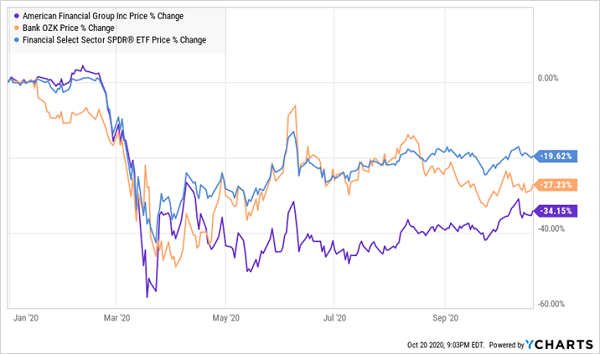 Until interest rates begin to get up off the mat, financial firms largely lack a “catalyst” to boost their profits and stock prices. As it stands, the Federal Reserve’s near-zero benchmark rate is brutal for banks’ bottom lines.

Johnson Outdoors (JOUT), as the name would suggest, boasts a connection to the multigenerational family business S. C. Johnson & Son.

Sam Johnson, the great-grandson of founder Samuel Curtis Johnson, took what was a massive floor wax company when he started there and eventually turned it into a massive, multi-pronged conglomerate. Some of that was internal—he led the team that innovated new products such as Pledge polishes, Glade air fresheners and Off! insect repellants. But he also used acquisitions to build up what eventually would become Johnson Outdoors.

Johnson Outdoors was just plain unlucky in that COVID-19 hit “during the heart of our primary selling season,” to use CEO Helen Johnson-Leipold’s words. Third-quarter net sales declined 21.5%, while net income dropped 42%.

This hiccup aside, JOUT’s top and bottom lines had been growing consistently for years, and it’s expected to get back on its feet in 2021. And management is so confident in the firm’s resiliency that in late September, it green-lit a 23.5% payout hike, continuing a short streak of raises since it initiated dividends in 2014.

There’s plenty to like here, especially heading into 2021 when people will be champing at the bit to get back to the great outdoors. 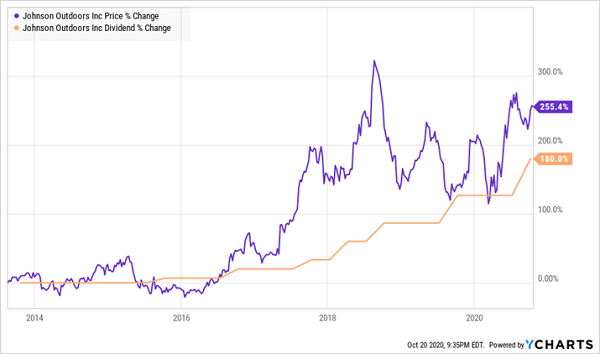 Atrion (ATRI) is a medical devices company, which has been a fairly en vogue industry of late. Atrion serves a number of medical niches, starting with its MPS2 Myocardial Protection System and other cardiovascular products, but also fluid delivery and ophthalmic products. It also provides manufacturing services for other device makers, and ATRI even has a side hustle making marine and aviation inflation components.

But most people haven’t heard of this diminutive $1.2 billion firm—in fact, you’ll be hard-pressed to even find analysts covering this name.

So, Atrion is an under-covered, behind-the-scenes play that serves important niches and has little competition, and it’s still off by double-digits this year. Better still, it has about a decade of dividend hikes under its belt, averaging 17% annual growth in that time, including a 13% raise announced in September. That sounds like the perfect prey for value hunters like us …

Atrion (ATRI) Could Catch Back Up With Its Dividend, Right? 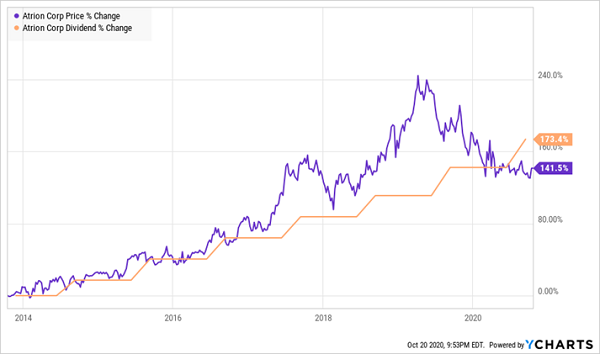 Despite being in a downtrend since early 2019, shares still look overpriced at 35 times trailing 12-month profits, and 43 times current-year estimates, which are expected to slump.

And that’s just a single analyst’s estimate—no one else covers ATRI shares. No one trades it, either, with just a few thousand shares dealt every day.

Atrion might be a little too backwoods. While the dividend growth is nice, the lack of information to analyze isn’t.

If you crunch numbers, you probably know Intuit (INTU). It’s the name behind TurboTax tax-preparation software, Quickbooks accounting software and Mint personal financial management tools. And its stock’s progress over the past decade isn’t just encouraging for investors—it also speaks volumes about scores of Americans that have taken their own finances (and even business finances) into their own hands.

Intuit (INTU): A Decade of Dominance in Financial Software 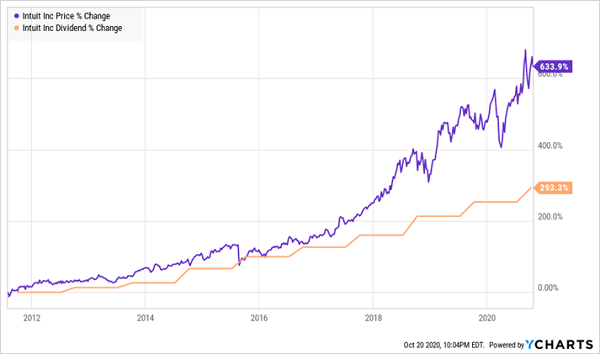 2020 has been a bizarre year for Intuit, which is a circus of a stock to follow when it comes earnings time. You see, financially speaking, this is one of the most lopsided companies on the planet because so much of its business revolves around tax season. Intuit typically will record most if not all of its profits during the April quarter—and the rest is a sea of red. 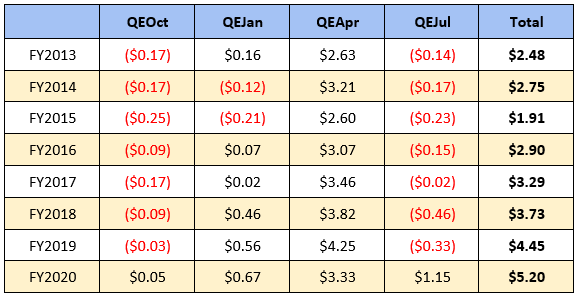 But while COVID was busy disrupting most companies, it actually “normalized” Intuit a little by shifting many tax filings from its April quarter into its July quarter.

The trend that matters, though, is at the end—solid, significant growth for a half-decade, and most projections are for that to continue for several years into the future. That has allowed Intuit to rapidly raise its dividend, including an 11% increase to 59 cents per share, payable in mid-October. And that only represents about 11% of its 2020 earnings!

However the stock boasts a rich valuation of more than 40 times estimates. Pretty pricey.

This a formula for success that has been proven again, and again, and again. Buy aggressive dividend growers that are actually growing their businesses, and you’ll clobber the market on a regular basis—with more and more of those returns coming from cash each and every year.

But JOUT and INTU might not be the right stocks, right this minute, for this strategy. Even if they keep boosting their dividends like there’s no tomorrow, their low yields make it extremely difficult to deliver meaningful income for decades. That’s too long to wait for retirees and those closing in on retirement.

And I’ve zeroed in on 7 specific tickers that can do just that.

These 7 stout income plays are so far off the radar, I’ve dubbed them “hidden yield” stocks. They all have one critical thing in common: they’re quietly handing smart investors growing income streams plus annual returns of 15%, 17.3%, 20.8% or more.

These 7 stocks are perfectly positioned to beat back the pandemic and soar on the other side. They ALL boast rising free cash flow, deep order backlogs and healthy balance sheets—a trifecta of inflation-beating strengths few companies can match.

Your next move is simple: Buy now and set yourself up for 15%+ annualized returns. That’s easily enough to outrun any inflationary wave we’ll see, because a return like that would double your nest egg every 5 years!

Full details on these 7 standout buys are waiting for you now. Click here to get my complete research: names, tickers, dividend histories and a full breakdown of their operations—everything you need to buy with confidence.