This 6.8% Payout Is “Hedged” Against a Market Crash

In my last article, I showed you funds that pay 6.4%+ yields and give you “crash insurance” in case of a market meltdown. The great thing about these funds is that they also offer tremendous upside in steady or up markets.

If that sounds like the best of both worlds, it’s because it is.

Instead of just buying the S&P 500 in an index fund, for example, you can choose the Nuveen S&P 500 Dynamic Overwrite Total Return Fund (SPXX). It tracks the index, provides extra downside protection and pays out a much higher dividend than index funds, too.

This isn’t the only fund that does this trick. There are dozens more.

In fact, if you’re nervous about the market and want as much safety as you can get while still staying invested, there’s one fund that’s an even better choice than SPXX: the Nuveen S&P 500 Buy-Write Income Fund (BXMX).

More Than an Index Fund

Here’s where funds like SPXX and BXMX beat out simple index products like the Vanguard S&P 500 ETF (VOO) or the SPDR S&P 500 ETF (SPY) in a downturn. Let’s say you bought SPY in 2007, right before the last meltdown: 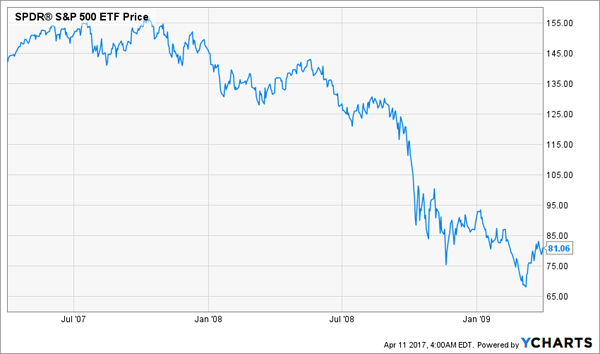 And the dividends SPY paid hardly picked up the slack. During this two-year period, our hypothetical investor would have gotten just $3,600 in cash from dividend payouts, or about $150 per month. That’s not nearly enough to give them the funds they need to cover the bills and avoid having to sell during a bear market to make up the shortfall.

This is the problem with index investing. Here’s how funds like SPXX and BXMX are different.

Both pay current yields of around 6.5%, meaning our hypothetical investor would get $541 per month in dividends in most market conditions. During the 2007-09 crash, a $100,000 investment split between these two funds would’ve paid about $15,800 in dividends over two years, even during a time when some Dividend Aristocrats were cutting dividends for the first time ever.

Still, these funds managed to pay our hypothetical investor $658 per month in dividends, on average, throughout the crisis on a $100,000 investment. Compared to the $150 per month SPY provided during this period, these funds clearly did a better job of getting cash out to investors.

And neither fund did it by sacrificing long-term performance.

In fact, looking at the chart below, you see that both funds came close to matching SPY’s performance from 2007 to today:

The Kind of Underperformance You Want 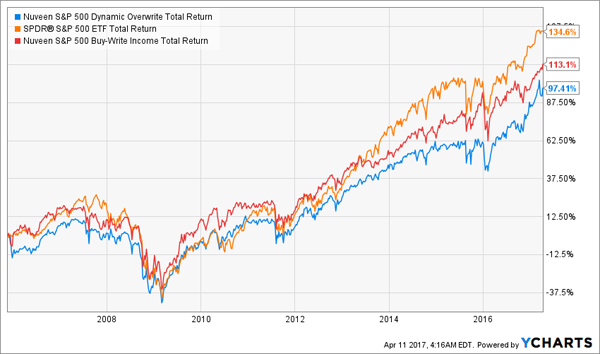 Anyone who bought and held any of these three funds from 2007 to today made money. The key difference is that investors who chose BXMX and SPXX were getting over $650 per month in cash from 2007 to 2009—arguably when they needed it the most.

Investors who chose the “easier” path of passively following the index didn’t have that option and were faced with two grim possibilities: running out of cash or selling stocks at low prices into the downturn.

This is one of the best things about closed-end funds like these two (and the 7 others I’ll tell you about here). And there’s more.

It’s true, as you can see from the chart above, that both BXMX and SPXX have underperformed SPY over the last 10 years. But that hasn’t always been the case. As you can tell from the same chart, both funds outperformed SPY at times during 2009 and 2011—in other words, during corrections, which is exactly what you want—and expect—from a defensive fund.

If the market has a downturn again, expect to see BXMX and SPXX pull into the lead over SPY yet again.

The Secret Behind a Safe a 6.8% Payout

How does this work?

It all goes back to these funds’ strategies. Both buy shares of S&P 500 companies, then sell call options against those shares. Effectively, they provide downside protection to investors by locking in a sell price on the shares they own.

The difference between the two funds is simple: BXMX protects more of its portfolio than SPXX. While SPXX sells call options on 35% to 75% of its portfolio, BXMX targets options against all of its holdings. That means its dividend is slightly higher (6.8% versus 6.3%), and its net asset value will be less volatile than that of SPXX. It’s the most conservative option between these two funds and an index fund.

The best part is, you can start collecting dividend payments while protecting yourself from a market crash and getting exposure to S&P 500 companies. And if it turns out you’re right and there is a crash soon, you’ll still collect high cash dividends and be in a great position to wait it out.

How We’ll Beat the Next Crash on Dividends Alone

What if I told you I’ve found a way to do even better than that 6.8% yield—I’m talking about a juicy 8.0% payout you can bank on when the market takes its next header?

So you can count on riding through the next storm on dividends alone … without having to sell a single stock. It’s right in the name!

This approach is even safer than simply buying the Nuveen S&P 500 Buy-Write Income Fund, because you won’t be piling all your cash into one fund—particularly one that tracks the volatile S&P 500!

That’s a recipe for disaster, particularly if you don’t have a long time horizon.

Our new portfolio carefully spreads your cash out over 6 different investments—so at $500,000, you’d have just $83,000 sitting in each one.

Better yet, some of these mysterious dividend plays move independent of the market, giving you even more diversification—and a much smoother ride than the index-fund (or even the covered-call fund) crowd.

This potent retirement bundle is waiting for you now. All you have to do is click here to get the names, tickers and buy-under prices on all 6 of these sturdy income plays.