A few days ago, I showed you exactly why now is the time to be greedy—not fearful—when it comes to stocks.

And now, buried deep in the latest gross domestic product (GDP) report is a tiny data point that proves I’m right. It’s the clearest signal in years that now is the time to buy.

I’ll show you 7 funds perfectly positioned to take advantage while handing you safe dividend yields up to 9.3% in just a moment. First, let’s talk about that under-the-radar signal I mentioned.

That’s great. But the real exciting news was in the data attached to the press release: corporate profits are up. Way up. In fact, they rose 9% year-over-year in the fourth quarter, following an increase of just 2% in the third quarter, when GDP jumped a whopping 3.5%.

This brings us to rule No. 1 when looking at big-picture stats like this: economic growth and stock performance are not related.

At the extremes, of course, they are connected. If you have -100% GDP growth, for example, you have a worthless economy, so companies in that economy will be worthless, too. But in the real world, where changes are small, there’s usually little connection between GDP data and where stocks will go.

What’s much more important is this chart:

Troubled Corporations Everywhere … or Not? 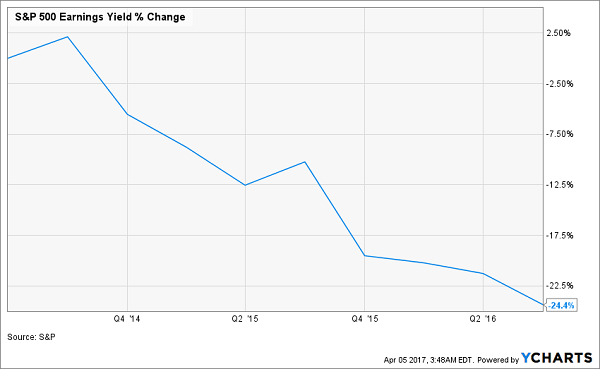 This is how much corporate earnings have changed in the S&P 500 in the last three years. Looks awful, right? But it was all due to oil.

Don’t believe me? Let’s look at how earnings per share (EPS) trended for the two biggest oil firms in the S&P 500, ExxonMobil (XOM) and Chevron (CVX), versus the three biggest companies in the index: Apple (AAPL), Microsoft (MSFT) and Amazon (AMZN): 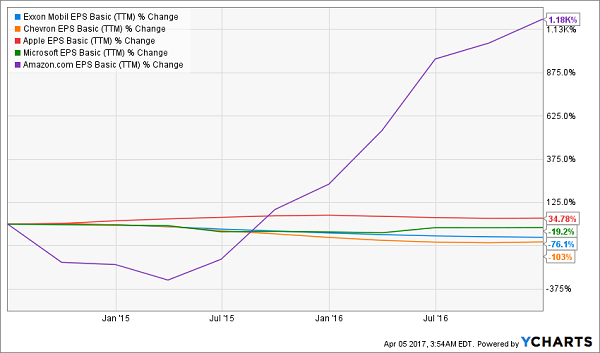 Amazon’s bottom line obviously got a lot fatter, but meager growth at Apple and a decline at Microsoft mean the biggest S&P 500 companies couldn’t make up for the drop in the energy sector and drive the S&P 500’s overall earnings higher.

So why is this good for stocks?

For one, the oil decline is over.

While the black stuff hasn’t gone back up to pre-crisis levels, it’s stabilized in the $40–$55 range, suggesting the market has found a new range. OPEC’s attempts to drive oil prices higher have failed—and rising oil supplies have failed to drive prices lower, too.

The bottom line? Oil is no longer going to shock the S&P 500.

But that’s nowhere near as important as the corporate profits data. At an estimated 26 or so, the S&P 500 price-to-earnings (P/E) ratio sounds horrifying. But remember that corporate earnings are booming. We’ve already seen two quarters of solid profit growth, which is going to boost EPS and thus make that P/E ratio shrink over time.

And a just-released analysis suggests that decline could be huge.

FactSet recently released a report on the status of corporate earnings so far in the first quarter of 2017—and they look amazing.

Just as we saw 9% profit growth in the fourth quarter of 2016, analysts are expecting 9.1% growth for the first quarter of 2017. But 76% of the S&P 500 companies that have already reported fiscal Q1 earnings have actually beaten analysts’ earnings estimates. Last quarter, only 31% topped earnings expectations, and only 70% of firms either met or beat expectations.

That means the S&P 500’s current P/E ratio of 26 is about to fall to near 25 over the next few days. And if the earnings bonanza continues, that P/E ratio will continue to fall.

But if you’re still cautious about stocks and don’t want to throw your money in the SPDR S&P 500 ETF (SPY), there are 7 low-profile funds you can buy now that will directly benefit from this strengthening market. You’ll cut your risk and boost your income, too.

For example, you could instead buy the Nuveen S&P 500 Dynamic Overwrite Fund (SPXX), which I recently wrote about, alongside the similar Nuveen Dow 30 Dynamic Overwrite Fund (DIAX). Both hedge your exposure to the S&P 500 Index by selling call options, which results in 6.5% yields for each fund, versus the mere 2% you get from index funds. So you’ll have less risk and more cash in hand if you choose these funds.

And there are even more high-yielding options for income seekers like us, such as the John Hancock Hedged Equity & Income Fund (HEQ) or the Madison Covered Call and Equity Strategy Fund (MCN). Those pay over 9% dividends, too.

Where I Invest My Own Money

All 7 of these income generators are part of a powerful group of investments called closed-end funds (CEFs).

If you haven’t heard of them, don’t worry. Few folks have.

That’s because there are only 600-some CEFs out there, and they live in the shadows of their popular cousins, ETFs and mutual funds.

That’s too bad, because a well-selected portfolio of CEFs can hand you a lot of income and market-beating gains, too. I’m talking payouts that are 4 times (and more) bigger than what you get from the average S&P 500 stock.

Because I’ve invested in CEFs for years, and I’m far from alone. Some of the world’s richest investors are on the “inside,” too, including titans like Bill Gates and Jeffrey Gundlach, who’ve used CEFs to build their own personal fortunes.

Now is your chance to join them, starting with the 3 top-flight CEFs in our 6-stock “8% No-Withdrawal” retirement portfolio. The highest yielder among this elite group yields an eye-popping 10.1% and trades at a whopping 7% discount to its true value! That means we can expect serious upside in short order … especially when you account for the big rise the overall market is about to take off on.

I can’t wait to take you inside this portfolio and show you all 6 of the income wonders inside it—including my 3 favorite CEFs. Simply click here to gain immediate access and start boosting your income stream today.