5 Big Dividends (up to 9.7%) That LOVE Higher Interest Rates

We hear it every single time the Federal Reserve raises rates, or even merely hints at it!

Sounds scary – but it’s simply not true. And we’ll highlight five picks paying up to 9.2% that will prove just that.

Many high-yield dividend payers don’t care about the interest-rate boogeyman – and some actually outperform the market when the Fed lifts rates. Consider this research from index provider MSCI (MSCI) studying 88 years of market history up through July 2015 (emphasis mine):

“We found that, when rates were low to begin with, high-dividend stocks outperformed the market by an annualized 2.4 percentage points when rates started to go up.

On the other hand, when low rates fell under such conditions, the high-dividend stocks in our study actually lagged the market by an annualized 2.6 percentage points.”

MSCI qualified “low rates” as less than 3%. We’re of course well below that threshold right now.

Let’s start with a unicorn – an insurer that yields more than 4%! There aren’t many of them, but Mercury General (MCY) breaks the mold despite being a fairly modestly sized insurance company – a $3.3 billion firm that operates primarily in California with some additional business in 10 more states.

Mercury General specializes in auto insurance, and also offers other products including homeowners and mechanical breakdown insurance (which covers repairs outside of accidents).

Insurers benefit from interest-rate hikes because they’re able to invest their premiums for more income. This is “free money” that drops directly to their bottom lines as rates head higher.

MCY is a dividend champion that has already raised its payout for 35 consecutive years. Expect more payout boosts ahead.

Mercury General (MCY) Is a Growth and Income Machine 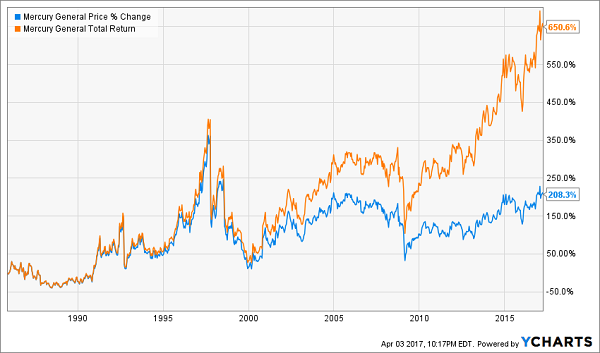 REITs are often plagued with quick knee-jerk reactions to interest-rate hikes as investors sell them based on the incorrect “conventional wisdom” that higher rates hurt REITs.

While their borrowing costs may be on the rise, the best REITs are able to quickly raise the rent to keep their profit margins and cash flows intact.

Host Hotels & Resorts (HST) can raise its rents daily. It’s one of the premiere hotel-related REITs on the market, with properties spanning brands such as Marriott, Grand Hyatt, Hilton, St. Regis, The Luxury Collection and Ritz-Carlton. Its properties are an ideal mix of business-center and resort lodging.

Better still, HST has a very manageable debt load of $3.65 billion that’s down by nearly a quarter since 2013, the REIT trades for an attractive 11 times FFO and the quarterly dividend has doubled over the past three years. 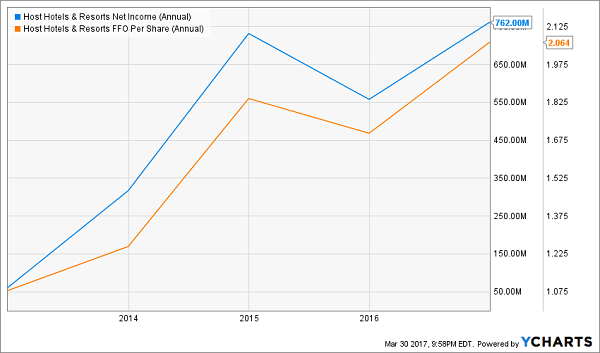 Apple Hospitality REIT (APLE) isn’t quite like Host in that it’s properties aren’t at the super-high end of the luxury spectrum, but its properties are still upscale, featuring Hilton and Marriott family brands across its 236 hotels, located in “urban, high-end suburban and developing markets” in the U.S.

APLE is a relatively new issue, getting its start on the public markets in 2015. But it offers some appealing metrics such as a sub-70% FFO payout ratio, higher-than-industry-average occupancy rate and sub-11 price-to-FFO ratio. Moreover, debt isn’t an issue, at just 23% of the company’s market capitalization – that’s far less than the 32.1% industry average. 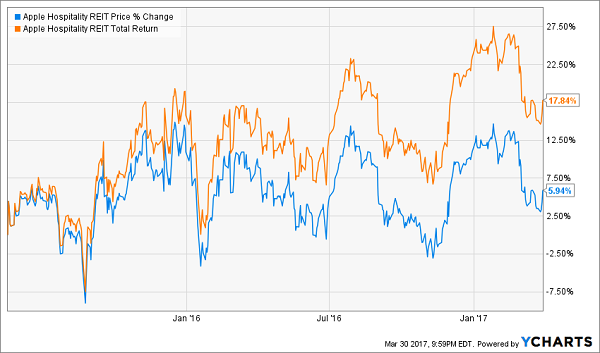 New Mountain Finance (NFMC) is a business development company that targets so-called “defensive growth” companies across a wide number of sectors and industries, including consumer services, healthcare, software and education.

I’ve already shown you how BDCs aren’t just immune to interest rates, but can actually benefit from them. New Mountain Finance is a winner not only on this front, but also because it uses Small Business Investment Company (SBIC) licenses, which allows it to borrow at low fixed rates that won’t get jostled by any Fed action. In fact, according to a recent filing, the U.S. Small Business Administration “issued a “green light” letter inviting the Company to continue its application process to obtain a second license to form and operate a second small business investment company (“SBIC”) subsidiary.”

NFMC has for the most part been a cool customer that has traded between $14 and $15 for most of its publicly traded life – all the while throwing off a generous dividend that currently equates to a 9%-plus yield.

The Power of New Mountain’s Payout 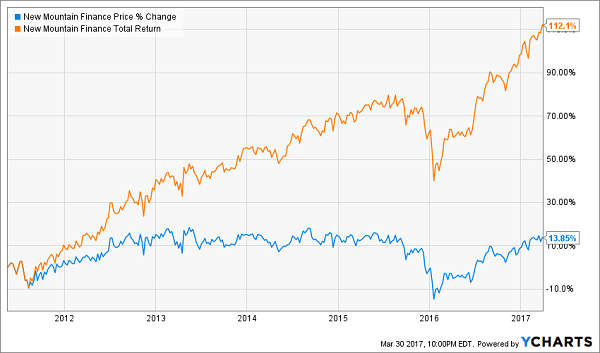 This one smacks in the face of conventional wisdom – after all, as yields go up, prices are supposed to go down, right? Sure, but it’s not a perfect relationship, and munis actually benefit in some ways. For instance, as rates rise, cities and states are less likely to try to refinance that debt, resulting in less supply of munis. On the flip side, if rates to head higher, there will be more demand for them – especially considering their tax-advantaged payouts.

That means good things for the Invesco Trust for Investment Grade Municipals (VGM), which invests in 490 high-credit-quality municipal bonds that results in a yield of 5.9% currently … but on a tax-equivalent basis means nearly 10% in yield for the highest tax bracket! 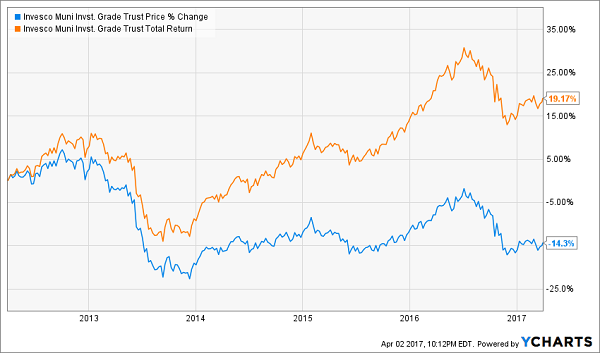 Live Off Dividends Forever While GROWING Your Nest Egg!

While low- and even no-dividend stocks can beat Janet Yellen and the Fed’s increasingly hawkish bent, low and no dividends aren’t the way to beat the market over the long haul and build a nest egg that will keep you in retirement.

No, for that, you’re going to need the big-yielding, dividend-growing dynamos that are found in my “No Withdrawal” retirement portfolio.

It’s easy to fall in the trap of investing in so-called “can’t-miss” blue chips that offer tons of safety, but little chance for meaningful capital returns and only so-so yields. Check your portfolio and count the number of 3% and 4% yielder you hold right now. Then think about this: If you’re earning just 3% to 4% across your investments, that means you’re bringing in retirement income of just $30,000 to $40,000 per year.

Does that sound like it will fund the kind of retirement you’ve worked so hard for?

That’s why I’ve been buried in months of research compiling my “No Withdrawal” retirement portfolio – a set of buy-and-hold dividend stocks that generate yields of 6%, 7%, 8% … even a couple in the double digits. But what’s really special about this set of picks is that they also offer the potential for 7% to 15% in annual capital gains. That means you can live off dividend income alone without ever touching your nest egg – but if disaster strikes and you need to dip in, that’s OK, because you’ve grown your retirement account with these double-whammy dynamos.

This is the perfect all-in-one portfolio because of its all-star makeup. This is a “best of the best” cluster of high-income assets like preferred stocks, REITs, closed-end funds and more. That means diversification and continued payouts regardless of how volatile or bearish the stock market becomes.

You deserve more than a retirement spent scraping by on meager blue-chip returns and your Social Security checks. You deserve big, regular dividend checks that will let you see the world and live in comfort for the rest of your post-career life.

Let me show you the path to a no-worry retirement. Click here and I’ll provide you with THREE special reports that show you the path to building a “No Withdrawal” portfolio. You’ll get the names, tickers, buy prices and full analysis of their wealth-building potential – and it’s absolutely FREE!