Investors are way too pessimistic about the economy. And their gloom—driven by the mainstream press (as usual)—is setting us up for a rare “double discount” on closed-end funds (CEFs) throwing off 7%+ yields.

I say “double discount” because almost everyone is misreading some of the latest economic signals—and it’s causing them to sell stocks (and CEFs!) at exactly the wrong time.

That mistake—which is behind a large part of the drop we’ve seen in the markets since the start of the year—is discount No. 1.

And we’ll get discount No. 2 by shopping for CEFs that are also trading at undeserved discounts. Specifically, we’re hunting for CEFs with significant exposure to the retail sector, which has undeservedly fallen hardest in the early 2022 selloff.

A good example is a CEF called General American Investors (GAM), which has yielded 7.3% over the last 12 months and trades at a ridiculous 16% discount to NAV as I write this.

We’ll talk more about this unique income producer in a moment. First, let’s set the scene on the number most folks are misreading—and look at how this gaffe sets up our double-discount opportunity.

Why This Rare “Double Discount” Exists

The number at the core of our opportunity is the retail sales figure for December, which came out January 14. According to the Commerce Department, sales fell 1.9% last month from November, an almost unprecedented decline when, normally, a surge in holiday spending causes sales to pop.

And it wasn’t Omicron. E-commerce sales weren’t much stronger, either. It’s almost as if everyone just stopped buying stuff. That’s hit the retail sector hard, as we see from the SPDR S&P Retail ETF (XRT).

Shoppers Cut Back—or Do They? 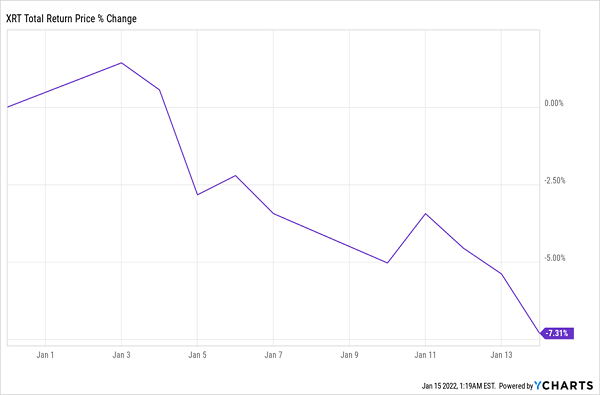 XRT is a useful barometer because its holdings, including Nordstrom (JWN), Victoria’s Secret (VSCO), Kroger (KR) and Amazon.com (AMZN), run the gamut of retail firms.

Here’s where things take a 180-degree turn, though, because that 1.9% decline is calculated on a seasonally adjusted basis. If we don’t adjust the numbers, total retail sales of $715 billion in December were up 10% from $649.9 billion in November 2021. 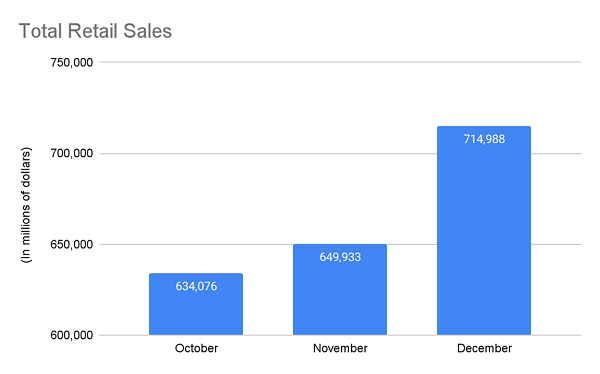 Data source: US Department of Commerce

In normal times, we’d unquestionably follow the seasonally adjusted numbers because the Commerce Department uses a trailing total of spending in all the constituent parts (auto sales, energy, restaurants, clothing, pharmaceuticals, building materials, etc.) to adjust according to what people tend to spend more or less on in a given month. This helps remove the irregularities that could appear because, for instance, people go to restaurants more in July than in November.

Of course, we aren’t living in normal times.

Because of COVID-19 and supply-chain problems, the data over the last two years has been unstable, to say the least. People are swinging from spending more in restaurants to spending more in grocery stores, for example, and back again. The changes are unprecedented, and they’re divorcing the seasonally adjusted numbers from reality more than they ever have.

This means that, until a more stable spending pattern emerges, it doesn’t make sense to use the adjusted numbers. So we’ll look to the unadjusted numbers instead. And they tell a much different story. 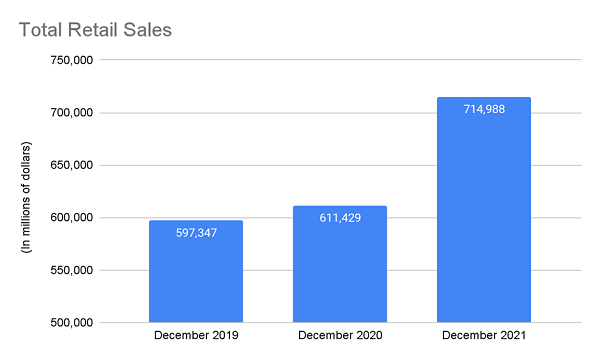 Data source: US Department of Commerce

Now, I don’t want to sound too optimistic here. Inflation is still an issue, with the consumer price index up 7% year over year in December. But even accounting for that, retail sales still went up over 12% from before the pandemic. No matter how you slice it, people are spending more in shops. The data is just noisy due to the unique economic times we’re living through.

This is why we’ve got a nice “double discount: buy window for stock-focused CEFs in front of us. While inflation is far from resolved, the rise in prices due to inflation also cause corporate earnings and, as we see in the chart above, sales, to rise.

All of that is likely to make for a strong earnings season, which starts in earnest next week. Add in the recent market pullback, and you get a strong chance of a rebound in stocks as this surprise earnings bounce catches overly pessimistic investors by surprise.

This is where our aforementioned pick, General American Investors (GAM), one of the oldest CEFs in the world (founded in 1927!), comes in.

This fund paid out a 7.3% dividend last year, and it currently trades at a 16% discount to NAV. GAM has paid out around 7% (and sometimes more) for literally years, thanks to its focus on value investing and finding those stocks that are oversold during a panic—just like we’re seeing right now. (The company pays most of its dividend as a one-time special payout to give its management team the dry powder to go after bargain stocks in a downturn—a smart strategy.)

Here’s something else few folks realize about CEFs: they boast an incredible safety record!

This is incredible enough on its own, but there’s another twist: of the 13 CEFs that did lose money, all but three were in the energy sector. Dump those 10 laggards and these CEFs’ win rate jumps to an incredible 99%!

I think you’ll agree that a track record like that—along with the hefty dividends CEFs offer—makes these funds a very nice antidote to the uncertainty we’re facing today. Because if you’re getting a cool 7% (and often more) in safe dividend cash, you can pay a lot less attention to the market’s daily gyrations.

I’ve assembled my 5 top CEF picks for the coming year, which yield a healthy 6.9% on average, and I want to share that list with you now. Go right here and I’ll give you everything I have on these 5 cash machines—names, tickers, current yields, best-buy prices, my full analysis of each fund’s management team, strategy, holdings and more.