Today we’re going to delve into a powerful strategy that can “convert” the bounce we’re seeing in the bond markets into a cool $100K income stream in retirement.

Best of all, this simple approach can help you do this without touching a penny of your nest egg.

Obviously, doing this with a savings account is impossible; as per the chart below, you’d need $10 million to produce that yearly $100K if your account earns 1%. And we all know that most savings accounts offer far less these days. 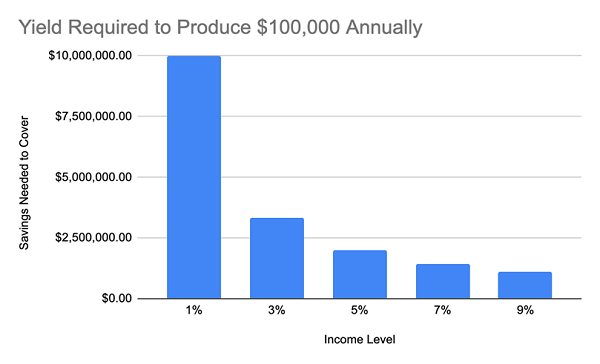 But are safe 9% dividends even possible? Absolutely. The current surge we’re seeing in corporate-bond yields is giving us an opportunity to grab that much and more. In fact, the closed-end fund (CEF) we’ll discuss below is throwing off an outsized 10.9% yield now. And it pays dividends monthly, to boot.

But this opportunity probably won’t last, if history is any guide. Here’s a look at the last few times bond yields spiked to levels like those we’re seeing now:

As you can see, big spikes in corporate-bond yields happened in 2018 and 2020, and they’re here again, with the average high-yield corporate bond yielding 8.3% now.

If we zoom in on the right side of the chart above, we can see that the spike happened in September, but we’re still pretty close to the peak. This means our opportunity is still open, but there’s likely limited time to get bonds yielding 8.3% or more.

My Advice? Do NOT Buy Corporate Bonds Individually

One thing we want to do, though, is make sure we “farm out” our bond buys to a professional.

That’s because, unlike common stocks, bonds can be complicated. The terms and conditions of each bond can differ widely, and those details are often buried in hundreds of pages of legalese. And those details matter a lot more than you might think.

Take, for example, the recent blowup at online used-car dealership Carvana (CVNA), whose stock plunged 98% this year as the company hovers close to bankruptcy. That’s a total loss for shareholders, but when it comes to Carvana bonds, it’s a different story.

Since not all bonds are alike, some have precedence over others, and Carvana management has more control over which ones they pay back in the event of bankruptcy. Some bondholders will get 100% of their capital, some will get less, some might get nothing, and some might actually get more than they invested.

How this shakes out would depend on the details in those legal clauses and the courts’ interpretations of them. At the moment, a group of debtholders is working together to be made whole before any other bondholders (let alone anyone owning the stock!).

And since this coalition owns 70% of the company’s unsecured debt (valued at about $4 billion), they’re most likely to get their way.

A 10.9% Dividend From One of the Best Bond Managers in the Business

PIMCO also happens to be the manager of the corporate-bond CEF I want to focus on today: the PIMCO Corporate and Income Opportunities Fund (PTY), payer of that 10.9% yield I mentioned earlier. (In other words, a $100,000 income stream from PTY requires just $917,432 to achieve).

This all means that PTY, which owns some Carvana bonds (about $5.8 million worth) now has the heft of not just PIMCO, which manages $2 trillion in assets, but also Apollo’s support, as well as all of the other co-signatories in this creditor group. If you just bought a Carvana bond on your own, you’d be out in the cold.

PTY’s Carvana bonds have fallen 33% in value since they were issued, indicating that they’re set to rise in value significantly if the Apollo/PIMCO alliance is successful (which it most likely will be—PIMCO does these sorts of maneuvers often, and they win a lot).

But there’s a more important takeaway from the Carvana story, and that is that buying into big bond managers through a fund like PTY gets you the kind of extra support and protections you can’t get on your own. In addition, you’re getting access to a vast collection of bonds spread out across economic sectors—a level of diversification that individual investors can’t match, either.

PIMCO’s well-known expertise has translated into a stellar long-term run for PTY: 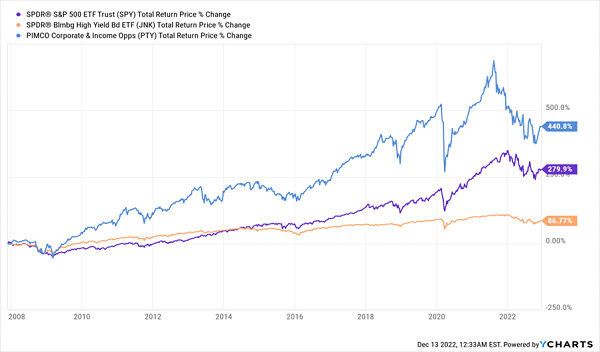 Not only has PTY (in blue above) beaten the S&P 500 (in purple) and the benchmark ETF for corporate bonds (in orange) for over a decade, it has also survived the Great Recession, the pandemic and every disaster in between. Its income stream has also been more than reliable the entire time (with each of the up and down spikes in the chart below indicating one-time special payouts). 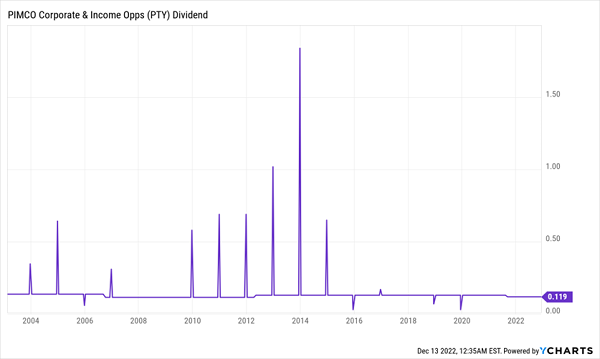 Before I sign off, I do have to mention the “PIMCO premium.” That is, if you look this fund up on a CEF screener, you’ll likely notice that it currently trades at a 19% premium to net asset value (NAV). That essentially means PTY is trading for 19% more than its portfolio of corporate bonds is actually worth.

However, PIMCO is a bit different from other CEF managers. Because of the company’s strong brand and performance record, its funds regularly trade at premiums, so its current valuation isn’t unusual. In fact, PTY gas traded at higher premiums in its history.

Urgent: Get My Top CEFs for 2023 Now (While They’re Still Cheap)

You’ll get my favorite corporate-bond CEF now (hint: it’s not PTY), along with 4 other high-quality CEFs from across the economy, when you check out the 5 CEFs I’m urging investors to buy now. These 5 bargain-priced funds—my top buys for 2023—offer an outsized 9.1% dividend

As impressive as that payout is, it’s only the opening act, because thanks to these funds’ totally unusual discounts to NAV, I’m calling for 20%+ price upside from each of them in the next 12 months! But even if I’m wrong and the markets retreat from here, these deep discounts help cushion our funds’ fall—and we’ll still collect their 9.1% payouts!

I’ve put everything I have on all 5 of these funds—their names, tickers, current yields, discounts and more—in a FREE special report. You can get your copy, and discover my entire CEF-investing strategy for yourself, right here.