Overbought stock markets—and pathetic 1% dividends—here in the US just might have you tempted to look overseas for higher payouts.

It’s a smart move. After all, plenty of countries offer investors higher dividends than America. For example, the yield on the FTSE 100 index, which consists of the 100 biggest companies on the London Stock Exchange by market cap, is 3.4% today, nearly triple the average S&P 500 payout of 1.3%.

(And you can get strong diversification across the globe—with a strong North American base—when you buy the 8%-yielding fund we’ll get to shortly.)

But as we discussed a couple weeks ago, we need to steer well clear of (or at least be very careful with) any exposure to China, because as fast as the country’s growth has been, the governing Chinese Communist Party’s respect for free markets is questionable—and has been growing more so of late.

Some Chinese Companies Are No Longer Allowed to Profit (!?)

The latest development here is that the Chinese government recently told education companies they can no longer earn a profit. It has also argued for reforms to limit how much profit other firms (especially in technology) can earn. Chinese stocks—especially on the tech side—have taken a hit in response. 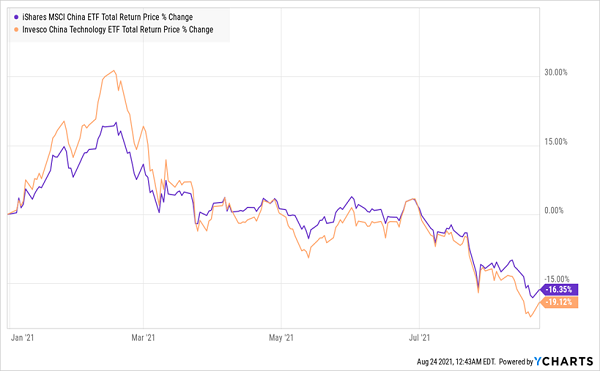 For some this is a shock; for others, it isn’t. We were twigged to the danger back at the start of the year: in a January 11 article, I wrote about the regulatory dangers facing Chinese stocks, as well as greater scrutiny faced by Chinese companies listing in the US. Almost on cue, Chinese stocks started falling.

Chinese Stocks Have an Identity Crisis

A big problem with Chinese companies is that, well, we simply can’t own them directly, which has prompted some firms to set up something called a “variable interest entity,” often in the Cayman Islands or Bermuda.

A variable interest entity holds a contract with the Chinese company saying it actually owns the Chinese assets. Then it goes public abroad.

As a result, when you buy stocks like Chinese ride-hailing service Didi (DIDI), conglomerate Tencent Holdings (TCEHY) or e-commerce giant Alibaba (BABA), you’re not actually buying these companies; you’re buying variable interest entities that have contracts with Chinese firms stating that they will share their profits with them.

In light of the fact that the Chinese banned profits at education firms, it’s certainly possible it would go one step further and make it impossible for firms like Alibaba to give assets to these outside firms. Such an outcome could leave your shares effectively worthless. 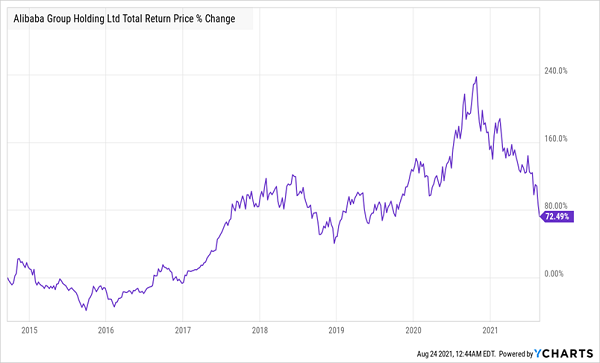 There’s something else happening with China, beyond its regulatory risk, that has always made it a tough place to invest: its economy and stock market have a habit of moving in different directions. 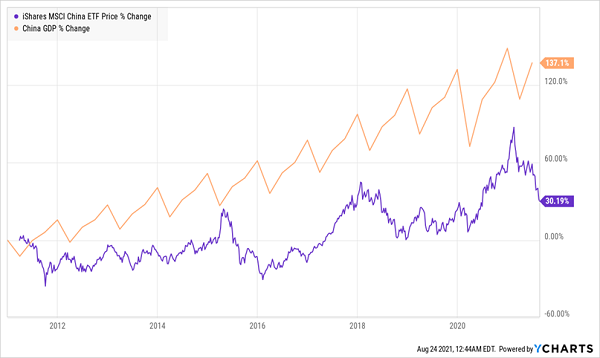 With China’s GDP up over 100% in a decade (and up over 5,000% from the mid-’90s), it makes sense that investors would want a piece of the action. But those investors forgot a cardinal rule of investing: the stock market is not the economy! It’s entirely possible for a country to grow like crazy and still be a lousy place to put your money.

But that doesn’t mean we need to turn our backs on the world and stay focused entirely on the US: remember that there are seven billion consumers out there and thousands of companies serving them—many of which pay healthier dividends than the relative misers of the S&P 500. But this does mean we need to avoid China until it fully accepts market-based capitalism.

An easy way to get international exposure without China is through the iShares MSCI Emerging Markets ex-China ETF (EMXC). EMXC has been recovering at a healthy clip since the start of 2020, while Chinese stocks are heading toward a loss. 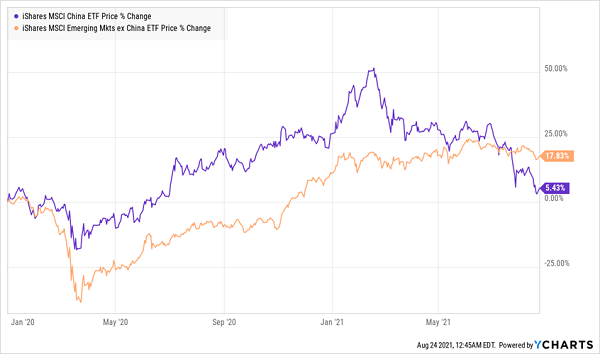 Trouble is, this fund does little for us on the dividend front, with just a 1.4% yield today. Luckily we can do way better with a closed-end fund (CEF).

That would be the Calamos Global Dynamic Income Fund (CHW), which has a whopping 8% dividend that crushes pretty well any payout you’ll find in stocks and ETFs. Even better, that payout comes your way monthly—and it’s held steady through rising rates, falling rates, the 2020 bust and everything else the last six years have thrown at it. CHW also crushed EMXC and the iShares MSCI China ETF (MCHI), a good benchmark for Chinese stocks. 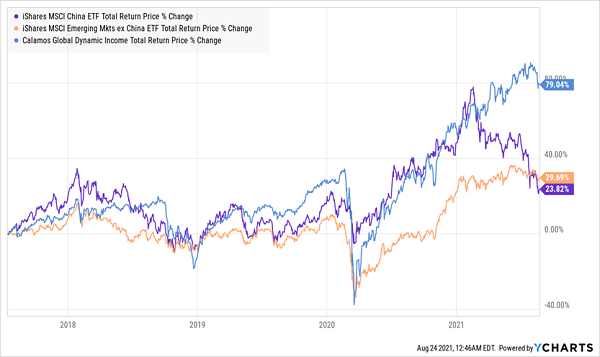 Now you do have some China exposure with CHW, but it’s minimal, and you get a solid base in North America, too, which is home to 54% of the portfolio—US giants with lots of global exposure, like Amazon.com (AMZN), Microsoft (MSFT), NVIDIA (NVDA) and JP Morgan Chase & Co. (JPM), populate CHW’s top-10 holdings, helping offset your overseas risk.

Further, Calamos’s management team has shown they know how to spot pitfalls (and opportunities) in overseas markets—their sterling performance record speaks to that. So they can quickly pivot away from China even further if necessary—something an automated ETF simply can’t do.

CHW is a good start, but the only problem is that it trades at a premium to net asset value (NAV, or the value of the stocks in its portfolio)—and we always demand a discount on our CEF buys.

That’s exactly what you get in my top 4 CEFs to buy now. They all trade at unusual discounts—so much so that I’m calling for 20%+ price upside in the next 12 months! Better still, they boast an average yield of 7.6%, nearly six times more than the typical S&P 500 stock.

I’m ready to give you full details on these 4 income (and growth) picks today. AND I’ll give you full access to all 15 funds in my CEF Insider service’s portfolio with no risk whatsoever.

CEF Insider, which, as the name says, focuses 100% on these often-overlooked high-yield funds, is widely diversified, with CEFs holding US stocks, international stocks, real estate investment trusts, corporate bonds and municipal bonds (whose dividends are tax-free for most Americans).

Our portfolio’s average yield is north of 6.8% today, and the highest payer of the bunch throws off a rich dividend just shy of 8% that comes your way monthly.

Click here and I’ll give you the full story on all of my top 4 CEF picks in a special investor report. When you do, you’ll also get an exclusive opportunity to “road test” CEF Insider and get full access to the service’s 15-fund portfolio with no obligation whatsoever.