This Weird Disconnect Sets Us Up for 7% Dividends, Upside, Post-Crisis

If you’re like most people, you’re wondering how in the world the market can be doing this when the country has been on lockdown for the better part of two months: 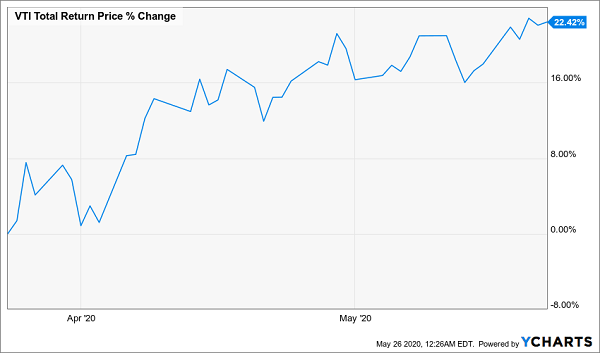 As you can see above, stocks spiked 22% since late March, going by the performance of the Vanguard Total Stock Market ETF (VTI). Meantime, the economy is a shadow of its former self: the Federal Reserve expects it to shrink 40% in the second quarter—worse than the 23% drop seen at the depths of the Great Depression.

Before you ask, no, this disconnect isn’t a recipe for another crash. Truth is, this weird contradiction makes complete sense—and sets us savvy buyers up for more upside—particularly if we buy through one of the 500 or so closed-end funds (CEFs) out there, which yield 7% or more. I’ll show you my 5 top picks among these unusual dividend machines at the end of this article.

Fact No. 1: The Economic Wipeout Is Priced In—Even Though It Doesn’t Seem Like It

Let’s do some quick math.

America’s annual GDP was $19.2 trillion in 2019, and that fell 4.8% in the first quarter of 2020. If the 40% drop in the second quarter is followed by a 20% drop in the third (assuming the lockdown eases up slowly until the end of September, a pessimistic assumption) and zero growth for the rest of the year, we’d end 2020 with a $16.1-trillion economy. 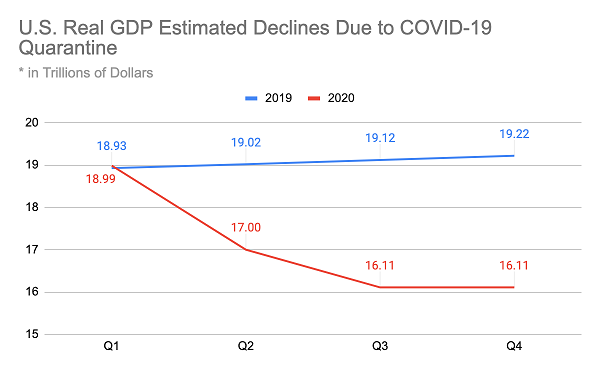 When all is said and done, we’d see a 16.1% GDP drop, which isn’t far from the 13% drop in all stocks we’ve seen since the market peak in February. 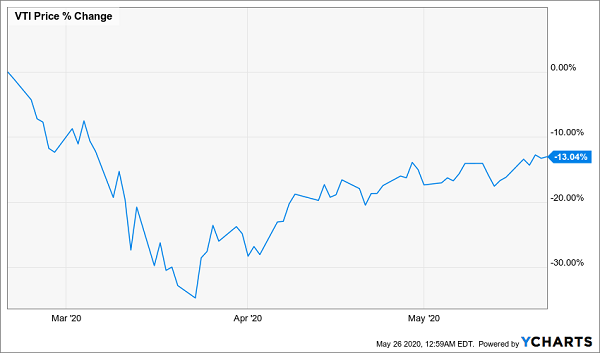 In fact, on average, the market seems to be pricing in the quarantine lasting until around August and Americans slowly getting back into normal spending mode by the end of the year. That’s a reasonable assumption.

Criticisms about the stock market being divorced from reality seem based on the assumption that investors don’t know about the job losses, lower spending and wave of small-business bankruptcies COVID-19 and the quarantine will cause.

Of course, investors know about all of these, not only because they’re on the front page of every newspaper but also because they’re being analyzed by every economist and central bank.

The National Bureau of Economic Research, which collects peer-reviewed economic studies, so far has 21 highly cited papers studying the economic impact of COVID-19 from every angle. These papers are closely analyzed and incorporated into investment models at hedge funds, investment banks and other firms managing trillions of dollars.

In other words, the economic fallout from the crisis isn’t new—it’s being re-priced into the market every day as more analysis is made available.

So it’s a mistake to base your strategy on the assumption that investors will wake up one day, realize the coronavirus will cause economic disaster and sell their stocks. That already happened in late February and early March.

Fact No. 3: There’s a Big Difference Between the Market and Individual Stocks

With so much up in the air right now, picking winning stocks, and avoiding losers, is particularly tough. Take, for instance, what’s happened to shares of Walmart (WMT), in red below, and Amazon (AMZN), in orange, relative to the broader market.

Investors Make Up Their Minds—Then Change Them 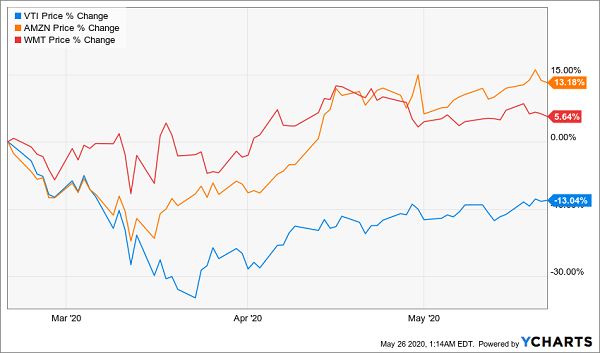 At the start of the crisis, many people thought Amazon would suffer due to people staying at home and, oddly, they did not think Walmart would suffer as much, despite Amazon’s bigger focus on e-commerce.

These are the kinds of short-term irrational price movements you often see in stocks, but investors eventually learn from their mistakes. When they realized a shutdown actually benefits Amazon and is a bigger threat to Walmart (but it’s still better for Walmart than the market as a whole), Amazon outperformed Walmart, while both were up versus the market.

At the end of the day, the current situation is unprecedented, and it will take time for the market to figure out who will thrive and who won’t. That’s why, in an environment like this, it pays to invest in CEFs with the management expertise, market clout and research tools to know where to put their money—and how to adjust when the winds change.

When it comes to CEFs, there’s one number you need to focus on: 7%. It’s the average dividend yield on the 500 or so CEFs in existence today.

But it’s also important for another reason: it’s the S&P 500’s average total return in the long run.

Think about that for a moment: just by holding the average CEF, you’ll be beating the market in dividend cash alone! Every gain you make through the fund’s rising price is pure gravy.

Remember, too, that 7% is just the average CEF yield. Plenty of these funds pay way more than that, like the 5 bargain-priced CEFs I’ll show you here, which boast blockbuster yields all the way up to 11%. So you could simply “cherry-pick” that 11% yielder and by year 9, you’d have recouped your upfront investment in dividend cash alone.

The kicker? This fund is currently trading at 17% below the value of the stocks in its portfolio! That discount is near an all-time high, and sets us up for some incredible upside as this one-time sale winds down (as it must): 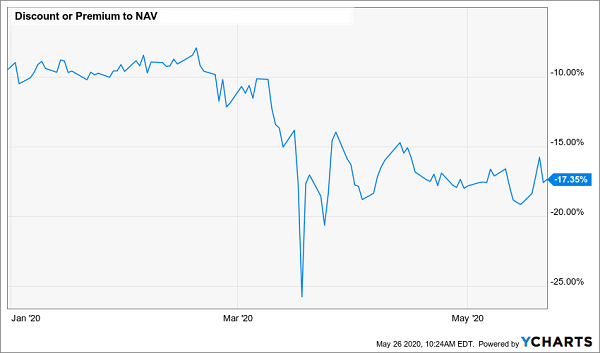 “This Is How Everyone Should Invest”

A big cash dividend is a lifesaver because you can use it to pay your bills during a crisis, without having to sell a single share to generate extra cash. With your investment intact, you’ll be in perfect position to reap strong price gains when the storm passes—and you’ll still collect your massive dividends the whole time!

This is how everyone should invest, but far too few people know that payouts like this are even available, and even fewer know about the retirement-building power of CEFs.

I’m hoping to change that today, starting with you.

Don’t miss your chance to grab these huge—and often monthly—CEF dividends while you can get them for a song. Click here for full details on my 5 top CEFs now: names, tickers, complete dividend histories and everything you need to know before you buy.