Somehow, some way, the stock market continues to levitate higher. Yet I see very little that’s worth buying here.

We can’t argue with the tape. Markets will do their thing, while we must do ours. And today, it’s a good time to be cautious and prepare for the possibility of another sharp pullback. (The old “retest” of the lows that most investors expected until they were swept away by the allure of rising stock prices!)

Our dream shopping list, as we’ve discussed before, should contain some blue-chip dividend stocks. Nasty bear markets are the only time we can buy these names cheap! Blue chips are usually expensive, rarely found in the bargain bin.

My subscribers and I took a light shopping trip in early April. I expect the next one will be a bigger dividend buying binge.

Remember, bear markets tend to last 12 to 18 months. History suggests that we are most likely in the early stages of many months of rocky markets. It is exciting to see stores and restaurants reopen, but I haven’t yet heard of any business that is planning a return to 2019 “normal.” I wouldn’t be surprised to see the markets throw a tantrum when the relaunch of the economy takes longer than expected—as I expect it to.

A Backdoor Tech Play (and My Toilet Paper Hero Moment)

Big tech stocks are carrying this rally. Everyone knows this, and how ironic it is that a tech mini bubble is being inflated while the worst recession since perhaps 1929 unfolds.

As is often the case when tech gets hot, the big picture thinking is correct. We’ve spent the last two months sitting at home, shopping online, streaming shows and flipping through our phones. The “new economy” we heard so much about in 1999 has officially arrived (21 years later!). The old economy is, well, suddenly feeling its age.

The Dow Jones Industrial Average (DJIA) is moving like the 124-year-old it is. Investors want Facebook, not Chevron. The tech-heavy NASDAQ 100 is up an impressive 8.3% year-to-date while the DJIA is down 13.4%.

This type of disparity—you guessed it—often precedes peaks in tech stocks. But we contrarian-minded investors need not get caught up in that fray. We can instead keep an eye on “undercover” tech plays like Walmart (WMT).

We’ve heard plenty about Wally World’s investment in e-commerce in recent years. It’s starting to pay off, and I’m a believer: the company managed to deliver toilet paper not once, but twice recently to my doorstep! 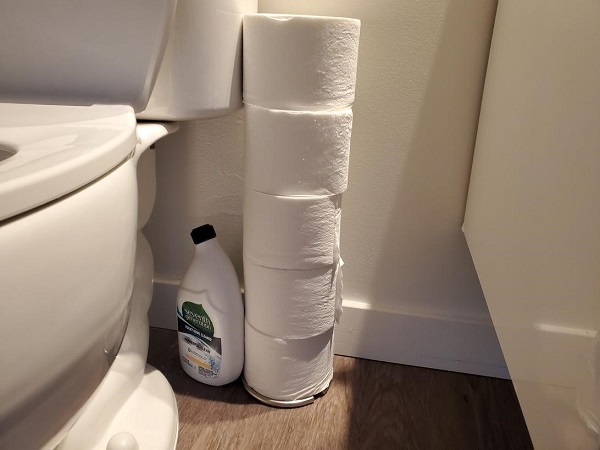 I’m “all in” on Walmart.com. This is the type of relationship that has legs in 2021 and beyond. And I’m not alone. The original big box store just reported that sales grew 9% year-over-year for its first quarter.

I’ve written before that Walmart is the only retailer that has Amazon.com (AMZN) within reach. It simply had to connect the “last mile” between its stores and its customers’ doorsteps, which it’s doing right before our eyes.

Compared with Amazon’s nosebleed P/E of 116-times earnings, Wally looks like a relative steal at 23. However, I’d like to see a bit more dividend for our dollar than its 1.7% current yield! So, we wait and watch.

The Crash “Aftermath” for Healthcare Deals

While tech is hot, healthcare is pretty darn warm today. And it’s important to remember that the “aftermath” of crashes can provide a fantastic time to buy healthcare bargains. To see this in action, let’s consider blue-chip drug maker Pfizer (PFE):

Pfizer’s Current Yield Through the Decades 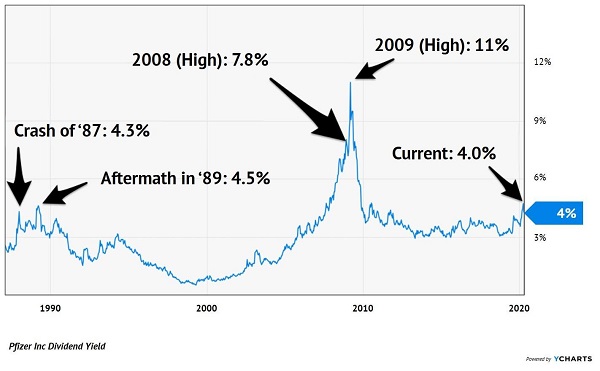 I like using Pfizer as a “panic benchmark” for healthcare because investor perception is remarkably consistent through the years—its pipeline always looks “a bit thin.” But this pharma behemoth always seems to refill its drug lineup and, most importantly, really knows how to peddle those pills. Here’s how Pfizer’s yield has spiked during recent panics and crashes:

Remember, buying a yield when it is high on a relative basis is the gift that keeps on giving. Not only do we maximize our income streams, but we also boost our price upside, too. Investors who grabbed those Pfizer shares in March 2009 quintupled their money over the next 11 years.

I’d wait on Pfizer and Walmart a bit, and would instead focus any new money on 7 overlooked dividend growth stocks that have my attention today.

They’re every bit as recession-proof and pandemic-proof as Walmart. But they’re cheaper, and they’re growing their dividends much faster. This is important for those of us who want 50% to 100% upside alongside our payouts. Click here and I’ll share the details on these 7 Hidden Yields must-haves.