Warning: These 3 Dividend Darlings Could Ruin Your Retirement

It’s a pitfall that can slash your income and your nest egg overnight—and this hidden trap is particularly dangerous to your financial health right now.

I’m talking about a snap dividend cut, something poor folks still sitting on General Electric (GE) shares learned again last week, when the stock tanked 9% in a single day after GE slashed its quarterly payout 92%—to a token penny.

The sad part is, anyone could have seen this massacre coming for miles.

All you had to do was look at GE’s cash flow, which kept staggering after the company sideswiped investors with a 50% dividend cut a year ago. Trouble is, even that shock cut left GE paying out nearly 3 times cash flow as dividends!

No Way This Dividend Survives 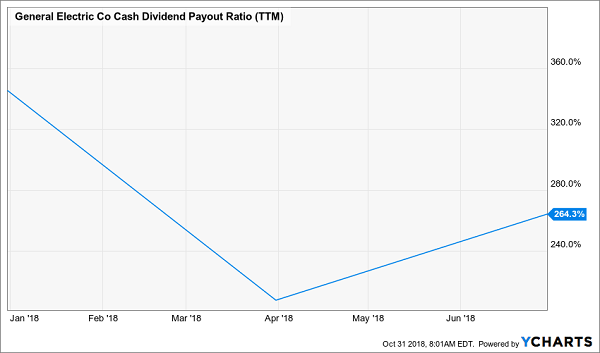 Something had to give—which is why I warned you a year ago that GE’s shriveled dividend was still in peril (and sounded the alarm again in January, June and mid-October).

But some folks just can’t resist a 119-year-old payout and a yield that’s spiked up to 6% in recent months. Both fantasies set GE up as a classic dividend trap, because that high yield was entirely due to a sickening drop in the share price: 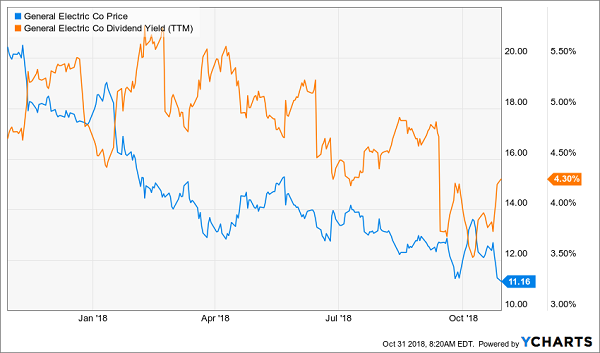 GE investors aren’t the only ones who’ve had their rose-colored glasses smashed recently.

Folks who’ve long believed consumer-staples stocks are safe (because people have to eat, right?) got dumped out of bed, too, after sector darling Anheuser-Busch InBev (BUD) halved its payout on October 25, cratering the stock 11%.

If you’ve read my articles on Contrarian Outlook, you know I’ve given BUD and all consumer staples stocks a wide berth, because here’s the problem: why would you risk a huge drop like BUD investors stomached when you can get the typical consumer-staples dividend (around 3% as I write) from a 10-year Treasury note and have your capital guaranteed?

It makes no sense—which is why we must own dividends that check off at least one box (and ideally both) of our 2-step “dividend checklist”:

If you’re on the lookout for high dividends now, I’ll save you the trouble: check out the 2 buys boasting safe yields up to 7.7% I just spotlighted in my October 30 article.

Meantime, I can’t stress enough that you really need to comb through your portfolio now, to make sure you’re not sitting on the next BUD or GE.

Dividends: The Year of Living Dangerously

Dumping dividend landmines like these two is particularly vital now, because a snap dividend cut is way more dangerous to your portfolio than it’s been in years, given that corporate profits are soaring and GDP growth is strong.

That, plus fewer dividend cuts this year (dividend decreases fell 28% in Q3 from a year ago, according to S&P Indices’ Howard Silverblatt) has set up some very lofty expectations. So when a stock you own makes a cut, you can bet its share price will be swiftly guillotined.

With that in mind, let’s look at 3 wobbly dividends you must sell (or avoid) now.

The Buckle, Inc. (BKE) appears to be doing many of the things we income-seekers love: it pays $1 a share annually, good for a 4.9% yield, plus the seller of clothing and footwear boasts a history of special dividends. Take a look: 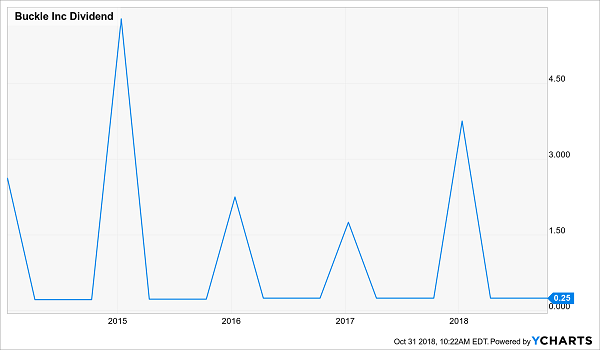 The topper? The stock is cheap, at just 11-times forward earnings.

Don’t take the bait. Because sales (the blue line below) have been in a slow-motion nosedive for 3 years, taking earnings (red line) and free cash flow (FCF, in orange) down with them: 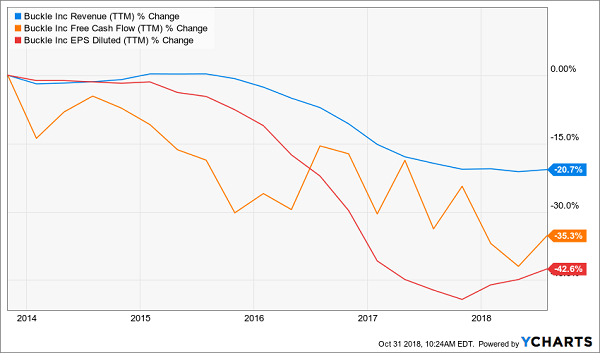 That, predictably, has driven up Buckle’s payout ratios: in the last 12 months, the company paid out more than it earned in dividends (140% of profits, to be precise), along with 123% of FCF.

Buckle does have a solid balance sheet, with no long-term debt and about $220 million in cash on hand. But do you want to own a company that could be forced to take on debt in the wake of slumping earnings while interest rates are on the rise?

Here’s the lure: the stock has dropped 44% in the past year, setting up an all-too-tempting P/E ratio of 12.9. That plunge has also sent the dividend soaring to 7.1%, more than double the payout on the 10-Year.

So what could go wrong?

A substantial dividend cut, that’s what. Because there are several indicators that this payout could be on borrowed time, starting with some pretty grisly payout ratios. As I write, L Brands’ dividend accounts for 75% of earnings. Worse, it’s basically paying out all (94%, to be exact) of its FCF as dividends.

There’s another silent indicator we need to pay attention to, as well. Because like Buckle, LB has a history of special dividends, something shareholders used to be able to count on once (and sometimes twice) a year since 2010. But that streak has gone cold, a sign management could be setting up for a cut to the regular payout: 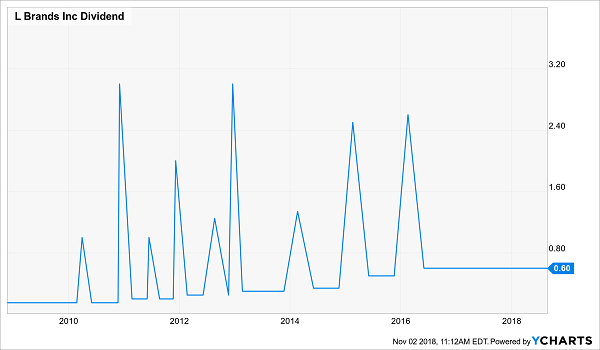 The company is staking a lot on its turnaround plan, which includes shuttering its money-losing Henri Bendel stores and attempting to sell its La Senza chain to focus on its core Victoria’s Secret and Bath and Body Works businesses.

And neither the payout nor the turnaround plan will get much support from LB’s balance sheet, with long-term debt accounting for 63% of market cap, high for a stock in the cyclical retail sector.

No matter what happens with LB, the fact is there are much safer 7%+ dividends out there, like the 7.8% payout on this healthcare REIT, which taps into the greying of America’s population, a trend that won’t end anytime soon.

ConAgra Brands (CAG) is the perfect example of a former bond proxy that has no hope of “outrunning” the yield on the 10-Year.

That’s because blue-chip food maker—owner of household staples Duncan Hines, Orville Redenbacher’s and others—is pinched in the same vise all other big-cap food stocks are: ingredient prices are rising, but these firms must eat that rise because small, local (and healthier) food makers are out-hustling them, making it tough to pass higher costs on to shoppers.

Take the company’s first quarter (ended August 26), in which its cost of goods sold jumped 2.6%, far outpacing organic revenue growth (up 1.6%) and adjusted earnings per share growth (up 2.2%).

That pretty much guarantees a flat dividend, and while the payout isn’t in jeopardy now, the trend is worrying: CAG’s dividend eats up a slightly uncomfortable 55% of FCF, which is the highest dividend-payout ratio we’ve seen in 6 years.

Meantime, the FCF backstopping that dividend is crumbling: 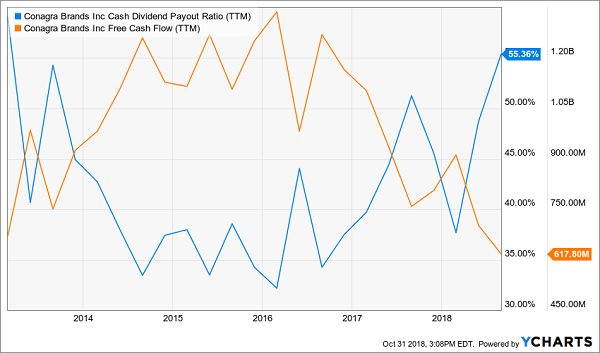 So don’t let CAG’s bargain P/E of 14.4 fool you. This former bond proxy will only fall further as rates climb. If you own it, sell now … and if you don’t, leave it on the shelf.

What if I told you I’ve found a way to take big-name stocks like Apple (AAPL), Alphabet (GOOGL) and JPMorgan (JPM), with sub-3% dividends (and in Alphabet’s case 0%!), and squeeze them for massive income streams up to 8.6%?

The best part? You won’t sacrifice a single penny of these stocks’ price upside to grab these huge payouts, either.

Oh, and one more thing: you can do this in just 1 click.

Think about that for a second: an incredible double-digit cash dividend right now—backed by rock-solid blue chip stocks everyone knows well.

And what I’m about to show you can be used on just about any blue chip out there, including mainstays like Johnson & Johnson (JNJ), AT&T (T) and many others.

It couldn’t be easier: just buy the stocks you love, straight from your online brokerage account. But instead of the paltry sub-2% dividend your typical S&P 500 name pays, you’ll get their “secret” payouts of 8%+!

In know this all sounds crazy, but I assure you it’s real.

It’s all thanks to an unsung group of investments I call “dividend conversion machines”—so named because they “convert” pathetic S&P 500 dividends into gigantic cash payouts.

They’re the closest thing I’ve ever seen to the perfect investment!

My team and I have pinpointed the 4 best Dividend Conversion Machines for your portfolio now, including one throwing off that 8.6% cash stream I mentioned earlier.

Plus, we’ve got these 4 breakthrough buys pegged for massive price upside, too. I’m talking 20%+ gains, on top of those massive dividend payouts.

Don’t miss out. Click here and I’ll share all the details with you, including everything I have on these 4 Dividend Conversion Machines and how to start their 8%+ payouts flowing into your account now.