U.S. Markets rebuffed negative headlines from around the globe this week, bouncing back from losses suffered earlier in March.

Boeing (BA) lost 11% combined over Monday and Tuesday, following a second tragic crash of its 737 MAX airplane that led to a global grounding of more than 300 of the company’s jets. The decline single-handedly accounted for a loss of more than 300 points on the Dow Jones Industrial Average in 48 hours.

The discussion if, when and how Brexit will proceed continues to play out across the pond, without a resolution. Theresa May lost a second vote in Parliament on Wednesday; and then the decision for the U.K. to withdraw from the European Union on March 29 was postponed entirely by another vote on Thursday.

Prime Minister May will make a third attempt to push her Brexit agenda through next week.

Elsewhere overseas, China reported 5.2% industrial production growth for January and February, which is the slowest performance since 2002. There’s little relief in sight, as press reports on Thursday suggested a possible summit between Presidents Trump and Xi will now likely not occur before April.

Looking ahead to next week, the earnings calendar is relatively light, but some notable names are scheduled to report:

The FOMC will also announce its next interest rate decision on March 20. Benign U.S. inflation reports on Tuesday and Wednesday of this week took any possible drama out of next week’s decision. In fact, Fed funds futures are pricing in zero chance of a rate hike at any point in 2019, compared with a 22% chance of an interest rate cut. 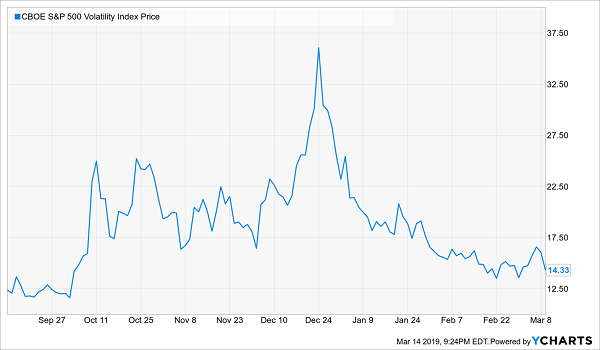 Whether stocks are up one week, or down the next, trading volatility has been steadily declining throughout 2019 and the CBOE S&P 500 Volatility Index (VIX) is at its lowest level since last October.

Barring a quick resolution of the trade issues with China or a surprise move by the FOMC next week, overall market volatility will likely remain suppressed until earnings season resumes again in mid-April.

With trading volatility quieting down, investors may be looking to put new cash to work in the market, especially if they stand to receive a tax refund from Uncle Sam this year.

However, the broader U.S. stock market averages have already gained more than 10% across the board in the first couple of month of 2019.

After a sharp rally like this, a key question we usually hear is: “what’s still worth buying now?”

It’s important for investors to remember that whether stocks are up or down, the market always places a premium on growth.

A stable dividend of 5% or more is nice, but what investors really need to build wealth over time, is a dividend that management continues to raise year in and year out.

It may sound too good to be true, because growth investors and income investors don’t usually see eye to eye.

Income seekers want the security of 5%-plus annual dividend yields, while growth hounds think that cash should be reinvested back into the business– because a solid earnings report can send a stock up that much in one day.

We’re here to tell you it’s possible to have the best of both investing worlds, and my colleague Brett Owens can show you how, with his simple (and safe) way to earn 12% a year from stocks with “hidden yields”.

At that rate, your money will double every six years, plus you can triple the retirement income that most dividend aristocrats or “safe” fixed income investments currently offer.

How do we accomplish this? Brett has discovered a key relationship between dividends and price gains that allow investors to find both growth and income in “hidden yields”.

Companies that consistently grow their dividends over time tend to outperform. The trick is the best dividend stocks almost never show high yields, because stock gains tends to track the size of dividend increases. If a company increases its dividend by 10% and the higher yield brings new buyers in, it often will send the price up and the yield back down toward where it started.

The hard part is finding the right investments to begin with and Brett has created a list of 7 stocks that offer such “hidden yields.”

These companies provide a solid dividend today, with the potential to keep growing that payout over the next several years—regardless of the interest rate agenda of Chairman Powell and the FOMC. It’s easy to fixate on a stock’s dividend history or its current yield, but the real value lies in how much that payout can grow in the future.

What starts out as a 2%, 3% or 4% yield today grows each time a company raises its dividends. You could easily end up earning 10% or even 20% a year just from rising dividends … because your original amount of invested money never changes!

Click here for Brett’s simple, three-step process how to earn 12% every year with these 7 “hidden yields” stocks.