You Won’t Believe What This 6.6% Dividend Does in a Recession

A proven recession indicator just went off again—only nine months after its last warning. And how have the markets and the media responded?

The funny thing is that this isn’t a bad news story for us. Because there’s a way we can profit from this signal of tougher times to come. I know that sounds counterintuitive, but stick with me for a moment and I’ll introduce you to a fund that protects—and actually grows—its 6.6% income stream when markets panic.

Before we get to that, let’s look at that recession indicator and tease out what it’s telling us.

The yield curve measures the difference between short- and long-term borrowing rates. In normal times, long-term borrowing rates are higher than short-term ones. This makes sense: why would you tie up your money for a longer period just to get a smaller return? But every once in a while, short-term rates move higher than long-term ones. That’s when investors expect economic growth to weaken in the near term.

And, historically speaking, they’ve been right.

Whenever the green line in this chart falls below the black line, three-month Treasury rates yield more than 10-year Treasuries. Note that when this happened in the late 1980s, the early 2000s and in 2006, a recession started about a year later.

This indicator went negative again in May 2019, just nine months ago, and it happened again, just a few weeks ago. 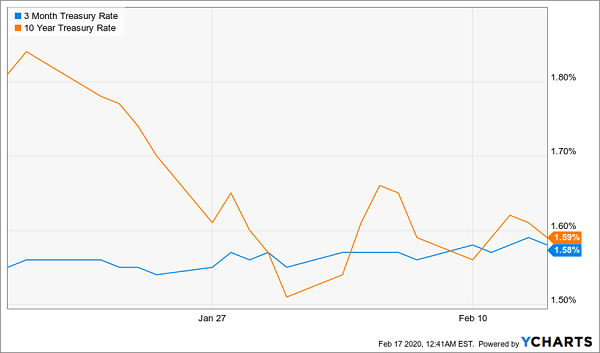 In late January, we saw long-term yields plummet to near their all-time lows, while three-month Treasuries stayed stable, causing this recession indicator to go off for the second time within a year. While investors worried in May, however, this time, no one seemed to notice. “A closely watched bond market phenomenon has again flashed yellow, but investors are loathe to give it much weight,” wrote Reuters.

Stocks are up around 4% in less than a month since this recession indicator went off. And understanding why is key to navigating this market today.

The Folly of Trying to Time the Recession

Even if the recession is around the corner, selling isn’t the answer. That’s because most people who try to time the market sell too early and end up earning less than those who ride out the recession. As well, these sellers often wait too long to get back in. And, of course, they miss out on dividend payments while they’re sitting in cash.

Too Much Fear and You’ll Miss This 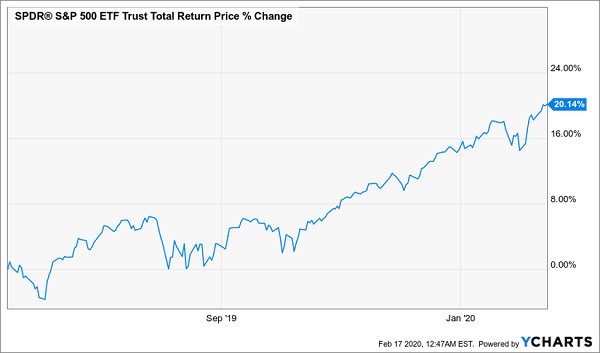 So panic selling is obviously not the way to go. Which is where the fund I want to tell you about today comes in.

There are two things you need to do if you expect a downturn: trim volatile, speculative plays from your portfolio and hedge your downside. You can do both with the Nuveen Dow 30 Dynamic Overwrite Fund (DIAX). This CEF gets you into conservative, blue-chip Dow 30 stocks, many of which boast high cash flow and minimal debt: companies like Home Depot (HD), McDonald’s (MCD) and Apple (AAPL).

Meantime, DIAX will hand you a nice 6.6% dividend yield, which is more than triple what you’d get from a Dow Jones index fund like the SPDR Dow Jones Industrial Average ETF (DIA). Plus, DIAX does something index funds don’t: it sells call options on its portfolio to maximize income and provide a useful hedge in a market downturn.

Call options are a kind of insurance that short sellers use to protect themselves from big losses in a bull market. DIAX sells this insurance to short sellers, collects the cash they pay for the privilege, and hands that money over to us. Because the risks of short selling go up in volatile markets (and recessions cause volatile markets), the profits from this insurance go up during a recession. This is why DIAX’s dividend doubled shortly after the Great Recession, and why it went up again in 2017, shortly after the market’s panic in 2016 boosted income.

An Income Stream that Grows When Markets Panic 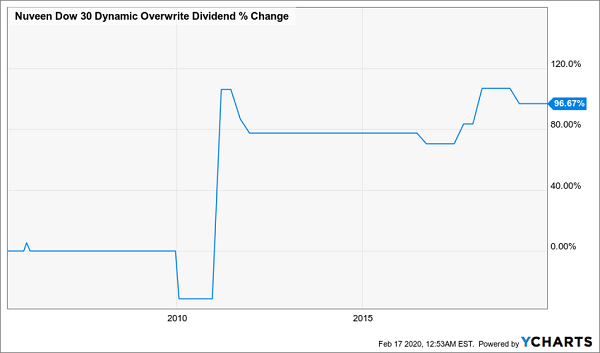 DIAX is an ideal way to ensure your money is still working for you and can provide a big income stream, even when markets lose their footing.

DIAX is just the start, because I’ve got 5 more CEFs that all throw off even bigger dividends—I’m talking a massive 8% average payout—waiting for you right here! Some of these red-hot buys even send dividend cash your way monthly.

I’ll tell you one thing about them straight away: none of these 5 CEFs sells call options like DIAX does.

Now don’t get me wrong: selling calls is a great strategy for weathering a downturn. But these 5 rock-solid CEFs get their downside protection from another, even better, source: their massive discounts.

These 5 funds are so cheap that I’m calling for 20%+ price upside, on average, from them over the next 12 months.

Here’s the clincher, though: if markets do tumble, these 5 funds’ cheap valuations set them up to simply trade flat—and we’ll collect their massive 8%+ dividends either way!

The time to buy is now, before their prices start ticking higher. Click here and I’ll tell you everything you need to know about these 5 income (and growth) plays: names, ticker symbols, buy-under prices, complete dividend histories and more.