Like many contrarians, I’m an income investor who’s always on the lookout for a good value stock. I love buying stocks of unloved companies at a bargain. It’s a strategy that can be rewarding – but it has risks.

These sexy BDC yields have been achieved the “wrong way” – with a tumbling stock price. Take a look at the Wells Fargo Business Development Co Index (WFBDC): 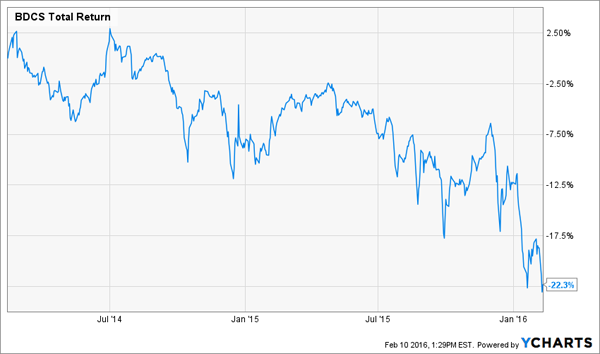 While the index has been trending down since 2014, it’s been in a serious freefall since the beginning of the year.

The biggest risk to date for many BDCs hasn’t been interest rates, it’s been borrower risk – specifically in the oil patch. If the energy sector continues to struggle we can expect to see write-downs for the next three or four quarters. It’s the reason I’ve been hammering BDC firms that have too much of their portfolios in energy.

Gladstone Capital (GLAD) reported mixed financial results for its first quarter. By mixed I mean an increase in unrealized depreciation of $38 million and a 19% decrease in net income per share.

As I recently warned, the company has leveraged itself into a corner. BDCs are currently required to hold a 1:1 debt to equity limit. While Congress might increase that to 2:1 this year, GLAD needed to increase its equity yesterday. It sold 2.3 million new shares to shore up its lending ratio.

In another turn, the company announced a new share repurchase plan. While that makes sense for a company trading at a discount to NAV, it should have been the first choice over equity dilution. Unfortunately, GLAD just didn’t have the cash to pull that off before they ran into debt limits.

Earlier this month, Pennant Park Investment (PNNT) reported a tough loss of $40.8 million or $0.56 per share. Pennant Park has an energy exposure of 10% of its market value and 16% of the investment cost.

In its earnings call, CEO Art Penn explained that even though they don’t believe it would happen, a total write-down for all of their energy assets would drop their NAV from $9.02 to $7.28 per share. That’s still 41% higher than the current stock price.

Energy represented a $42 million decrease in valuations for the quarter. It’s part of the reason that the stock prices for both Gladstone Capital and Pennant Park are down more than 40% over the past year.

I’ve also been down on First Street Finance Corp (FSC) – because it never earns its shareholders any positive returns. And the company just announced that its book value declined by roughly 7% for the quarter as a result of increased unrealized losses.

Fittingly, the firm agreed to decrease its management fee a quarter point. Apparently investors started asking questions about how much they were paying management in the face of its returns. (And for more details, Forbes author Antione Gara lays out a compelling story about why Leonard Tennenbaum’s Fifth Street Finance Corp BDC is such a mess.)

A high stated yield is not necessarily a death sentence. It means the fundamentals should be considered with a second-level mindset. You must ask yourself, why are the yields so high, and is there something everyone else is missing?

Investors can’t afford to write off all BDCs as without merit. After all, business development companies provide bridge loans, mezzanine financing, and provide capital solutions to a wide variety of small to medium companies.

And there are interesting prospects to consider.

One of the hottest BDCs out there is Prospect Capital (PSEC) – and by hot I mean one of the most hotly contested. PSEC has a monster yield and delivers 1.36% every month – or 19% annually. It’s supporters and cheerleaders are only outdone by the company’s detractors.

Wells Fargo dropped the company to Underperform last month and has since reiterated that rating.

The stock has already lost 13% this year and was scraping against 52-week lows earlier this week until it bounced on Wednesday after a positive earnings report.

Prospect Capital announced that its net investment income (NII) had grown by $9.7 million from the prior period. The company reiterated its dividend payments for February through April.

The company’s net asset value (NAV), down 5% at $9.65 in December, was impacted primarily from volatility in the capital markets. The impact of energy on its NAV write-down was just 18% versus a 74% hit from capital market write-downs.

PSEC surprised everyone in a good way on Wednesday by announcing NAV dropped only 5%. This means its stock is still trading at a 40% discount to its portfolio. And historically, you’d have done very well buying PSEC and other BDCs at big discounts to NAV.

The biggest cloud on PSEC is that there are rumors of an SEC investigation that the company and its auditor had improperly marked the value of its collateralized loan obligations (CLOs). Any time auditors come into question, it’s not a great sign for the stock.

Too many Arthur Anderson flashbacks leave a bad taste in many investors’ portfolios. Wall Street is already suspicious of the management at PSEC and this could give them added reason to avoid the stock.

Despite the black cloud that this SEC investigation could signal, PSEC stands as a better BDC than GLAD or PNNT. But the SEC and energy exposure may be the least of their worries. Turbulent capital markets are going to challenge many of these firms and their financial wizardry.

A BDC that Needs to Grow Up

Another BDC to avoid is Triangle Capital Corporation (TCAP). Triangle is a favorite of many BDC investors and with a 13.7% yield, it has one of the largest dividend payments in the group. As attractive as it is, this BDC suitor might need to cool down for a bit.

This week the company announced that its Chairman and CEO Garland Tucker was stepping down as CEO. Now many of these BDCs have a unique “special sauce” or formula for investments. They stick with key individuals and investment recipes because longevity and stability is important – to their investors and borrowers alike.

It’s been noted that underwriting losses have increased at TCAP over the past three years. It could be the real reason management is making a change in the head office.

It’s rare for top management or executives to step down from roles like these unless there are problems. While Tucker is staying on as Chairman, his replacement as CEO suggests that the company may be making changes to its investment recipe.

The Triangle Capital announces earnings later this month which might shed more light on the firm’s outlook. But this is a “stay away” at best for now.

As mentioned, I tend to find value in segments that much of Wall Street has given up on. A key part of that strategy rests with buying the absolute best companies in those areas.

I’m not the only one who is in love with this BDC. MAIN trades at a 21% premium to their NAV, and is one of the few BDCs that trades at a positive to its NAV.

One of the reasons Main Street has been so successful, is the company’s focus on keeping expenses down. Gross profit margins for the quarter were a staggering 84.9%. Contrast that with the BDC industry at large, which tends to have expenses that eat up almost 40% of the income.

Main Street’s lean cost structure helps it weather downturns and investment losses better than their peers. Not that losses are much of a problem – Main Street increased revenues by 17.2% last quarter.

While many BDCs are breaking investors hearts, Main Street is giving us something to love this Valentine’s Day weekend.

But Why Rely on Financial Wizardry?

There’s always the risk that these firms wouldn’t survive another 2008-level crisis or worse. So if you need income today, then why not instead purchase payers that don’t live and die on high yield debt and financial heroics?

For current dividend hunters, I prefer investing in a sector that’s guaranteed to grow in the years and decades ahead – healthcare. There’s a bull market unfolding right before our eyes as the Baby Boom generation gets older, and it’s going to run for the next two or three decades. Consider that:

The three companies I like best are direct plays on the boomers’ new spending pattern. They pay yields north of 8% today. And all three companies are increasing earnings and their dividends annually. Anyone who buys today will see a 10%+ yield on their initial capital in no time at all.