Energy is one sector where the experts just can’t seem to get it right.

That’s a trend my colleague Brett Owens has been watching for a long time. In a March article, he warned that too many investors were bullish on oil, and the hedge fund “experts” betting on an imminent price breakthrough were wrong.

Since then, oil prices, oil stocks and energy funds have fallen sharply, leading energy to post year-to-date losses while every other asset class is up: 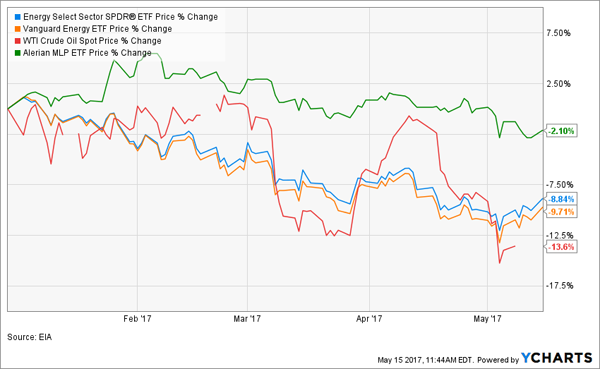 It doesn’t matter how you played energy; the Alerian MLP ETF (AMLP) was the best performer, but even that was negative, while the more oil-exposed Energy Select Sector SPDR ETF (XLE) and Vanguard Energy ETF (VDE) were down about 9%, on average.

Of course, neither did as poorly as WTI futures, which have slumped over 11% in 2017.

In such a market, it’s easy to have flashbacks to 2014. Back then, the bottom seemed to fall out on the entire energy sector, and it seemed folly to play energy in any way, shape or form. Personally, I abandoned energy about five years ago and never looked back.

Now, however, it’s time to look back.

While energy’s recent weakness is alarming to many investors, it’s actually a hidden blessing, because it indicates that something very special is happening to oil.

Right now, the black stuff is range bound. And if we go back three years, it’s easy to see how we’ve entered a new phase in the super-cycles that dictate oil prices. 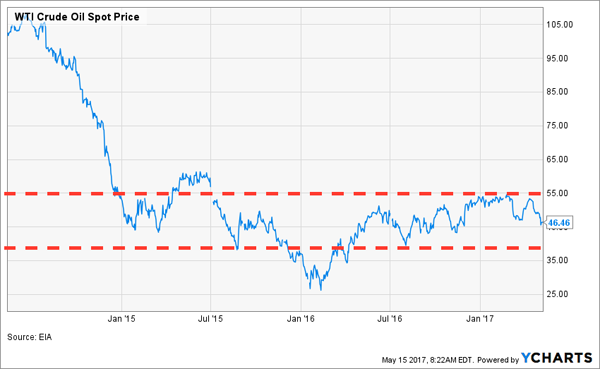 Since the WTI crude price nosedived in late 2014, it’s reached a new range of $37 to $54 per barrel, with volatility of 33.7% from the median. That’s pretty much in line with oil’s historical average volatility, indicating that, despite the herd’s worries, this isn’t really an unusual time for oil.

Since World War II, oil prices have been characterized by long lulls followed by sudden, sharp price changes (either upwards or downwards), then a period of relatively low volatility: 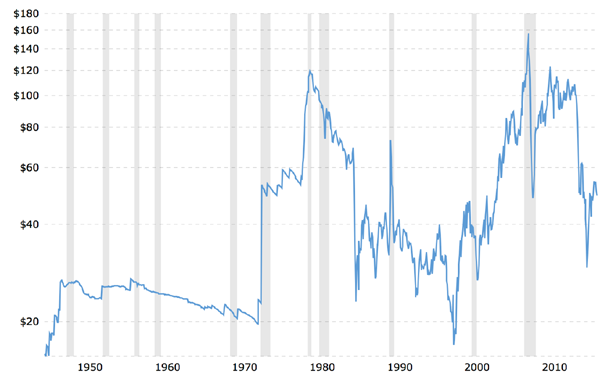 Looking at the period from 1949 to 1973, we had the longest period of oil calm until the OPEC oil embargo; after that crisis finished, oil actually stayed in a tight range for five years, despite the ’73 crisis showing just how dependent the US was on imported crude oil (which, theoretically, should have caused greater volatility and market worries).

Then another spike came during the 1979 oil crisis, following the Iranian revolution and years of slowly declining prices. Similar moments of crisis and relief in the 1980s, 1990s and 2000s caused similar moments of sudden price spikes and falls, followed by anywhere from one to six years of relative price stability.

Which brings us to today.

Back in November, OPEC tried to boost oil prices with a production cut. When that failed, Saudi Arabia and Russia said they’d work on extending the cut even longer. Now the two big crude producers say they’ll extend the OPEC deal to March 2018; oil markets replied by raising prices to all of $52 per barrel—well within the range the market has established since 2014.

Again, oil is demonstrating its relatively stable pricing, which has a lot of implications for the energy sector that the market hasn’t considered.

Most important is the impact on company profitability and debt defaults. Remember a year ago, when energy-related companies saw default rates spike to 30%? Well, those defaults are way down now. Almost all of the firms that couldn’t survive in a world of sub-$55 oil are out of business.

In short, the market has weeded out the herd, leaving only the strong to survive.

Secondly, the energy sector has re-priced the reality of lower free cash flows and liquidity among energy companies. With energy stocks now mostly priced lower and dividend cuts in the rearview mirror, stock pricing across the sector has become increasingly stable.

In 2015, the energy stocks in the S&P 500 saw their average price-to-earnings ratio rise to 22.4, according to FactSet, double their 10-year average. But more recently, energy has seen more earnings growth than most other sectors. As FactSet recently noted, “The information technology and energy sectors were the largest contributors to earnings and revenue growth in Q1 2017 for S&P 500 companies that generate less than 50% of sales inside the US.”

The bottom line: Energy is at the beginning of a recovery because the sector has adjusted to the new range for oil prices. And with prices effectively staying in that range, existing companies will have even more time to adapt and deliver better results than the market’s current fear-based selloff is expecting.

How to Get Into Energy

That leaves us with one question: how can we take advantage of this rare setup?

An obvious way would be to buy the Energy Select Sector SPDR ETF (XLE) and hope for the best. The only problem is that you’re buying a lot of losers among the winners in this fund, and you’re not getting any of those assets at a discount. Plus, you’re limited to common stock, although some of the real deals in energy are in the bond market.

Luckily there’s a better way. It lets us buy a more diversified collection of energy assets at a discount and get the expertise of energy experts on our side.

I’m talking about closed-end funds. Of the 34 energy CEFs out there, 27 are trading at a discount to their net asset value and are paying dividends as high as 11.7%.

Take a look for yourself: 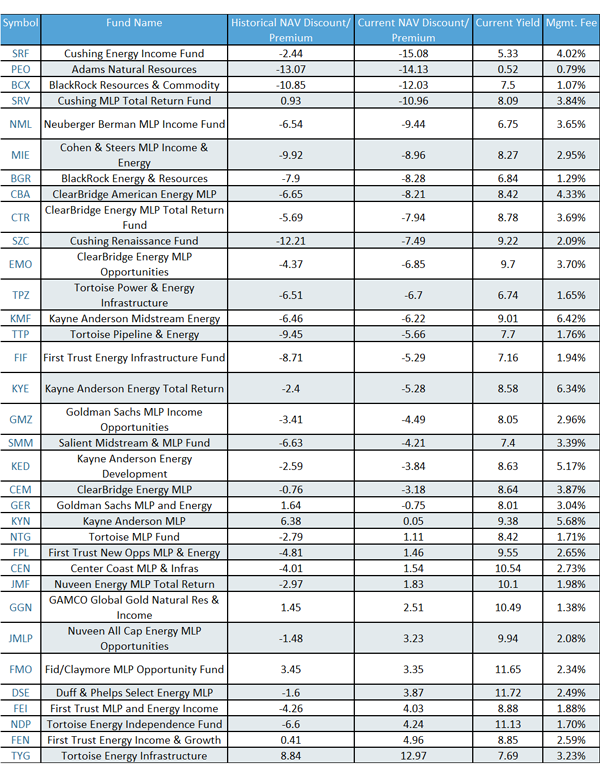 I’ve just released a new special report revealing my 4 favorite CEFs from all sectors of the economy—not just energy. Right now, these 4 cash machines throw off rock-solid 7.6% payouts, on average, and they pack a big capital gains punch, too!

That’s because all 4 not only trade at big discounts to their current NAV but are also far below their historic discounts to NAV, too. This is the real key to big profits in CEFs, because as these weird discounts revert to the mean, they’ll send all 4 of these funds on a wild upward ride that will tack on 20% gains—at least—in the next 12 months!

Add in their 7.6% (and higher) yields, and we’re talking about easy 30%+ wins here. And you’ll take a nice chunk of that gain home in cash.

But the discounts on all 4 of these hidden gems are already starting to close, so time is short. Don’t miss out! Click here to get the names of all 4 of these 30%+ winners now!