3 Perfect Retirement Payouts Up to 9.6%

Exchange-traded funds (ETFs) have rapidly earned a favored spot among investors thanks to their dirt-cheap diversification. If you want to quickly build a blended portfolio at a low price, it’s hard to do better than ETFs.

Closed-end funds (CEFs), by contrast, are virtually an afterthought, and that’s too bad. Because in many cases – including the three high-yield dynamos I want to show you today – they’re a superior source of quality and raw total-return performance.

What is a closed-end fund exactly? Funnily, it sounds almost like an ETF – it’s a big, pooled investment in numerous securities (stocks, bonds, preferred shares or other assets) that trades on an exchange. However, while ETFs can add or subtract shares based on demand, a CEF goes public with a fixed number of shares, which occasionally results in the fund trading at a discount or a premium to the net asset value of its investments.

Another critical difference that can lead to vastly dominant returns is CEFs’ ability to use leverage, borrowing money to generate additional value. That’s why it’s possible to see closed-end funds that hold stocks with middling dividends churn out explosive yields in the high single digits.

Why do CEFs sit in the background? Because they tend to be actively managed, which means their expenses are often much higher than what you see in the ETF space. However, while low fees are a key to ETFs’ success, sometimes you get what you pay for – for better and for worse.

Today, I’m going to highlight three closed-end funds that not only offer high-single-digit yields of up to 9.6%, but also outclass their popular exchange-traded counterparts.

Preferred stocks are one of the market’s best sources of income. These so-called stock-bond “hybrids” deliver elements of each, trading on an exchange just like common stock for easier accessibility, but also offering a stable fixed payment just like a bond. While they don’t come with the voting rights that common shares do, nor do they appreciate the same way, investors are compensated via outstanding yields of around 6% to 7%!

BlackRock (BLK) is king of the ETF hill when it comes to preferred stocks, with its iShares U.S. Preferred Stock ETF (PFF) boasting nearly $18 billion in assets under management! But I’d like to point you toward the Flaherty & Crumrine Preferred Income Fund (PFD) instead.

The PFD is like many other preferred-stock funds in that the lion’s share of its holdings are financial-company preferreds. This fund is 53% weighed in the preferreds of companies such as JPMorgan Chase (JPM) and Wells Fargo (WFC), while another 23% belong to insurers such as Metlife (MET).

At less than $300 million in assets, the PFD doesn’t hold a candle to PFF. But believe it or not, it has actually been around far longer (inception 1991 vs. 2007 for PFF), and it offers 160 extra basis points in yield.

While the ride isn’t as smooth as the PFF thanks to its financial leverage, over the long haul, it has proven a far more lucrative investment. You just have to be willing to hold on, and it does pay to buy on dips. 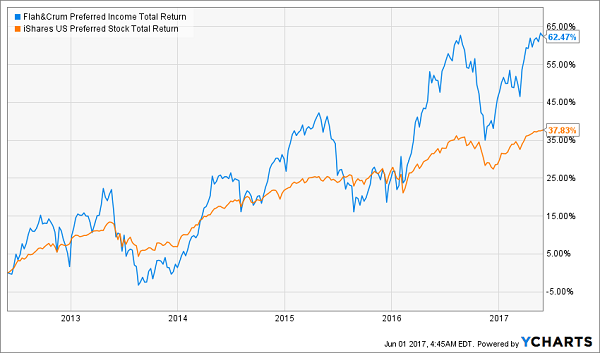 Senior loans are a much lesser-traveled area of the stock market, but also an excellent source of yield. These loans are first in line when it comes to debt service, and the “senior” moniker has to do with the fact that they’re secured by assets via a top-priority senior lien. They’re also difficult to invest in because they’re not listed on exchanges – funds like the Nuveen Short Duration Credit Opportunities Fund (JSD) and the SPDR Bloomberg Barclays Short Term High Yield Bond ETF (SRLN) are among the only practical ways you and I can get exposure.

The JSD is about 83% invested in the senior loans of companies including Albertson’s and IntelSat (I), though it also includes about 12% corporate bond exposure, with small positions in cash and even common stocks. (SLRN is a 90/8/2 senior/bond/cash split.)

Most important to investors is that JSD is able to squeeze nearly 2 percentage points in extra yield by looking for bargains in slightly lower-credit loans and bonds than SRLN, as well as leverage in the fund. Moreover, JSD tamps down on risk by focusing on short-duration issues.

Despite this shorter duration, Nuveen’s product has outperformed SPDR’s fund since the latter’s inception in 2013. While the difference is only a few percentage points, it’s important to note that it comes amid one of the more difficult periods for the JSD.

When Nuveen’s JSD Builds a Head of Steam, Watch Out! 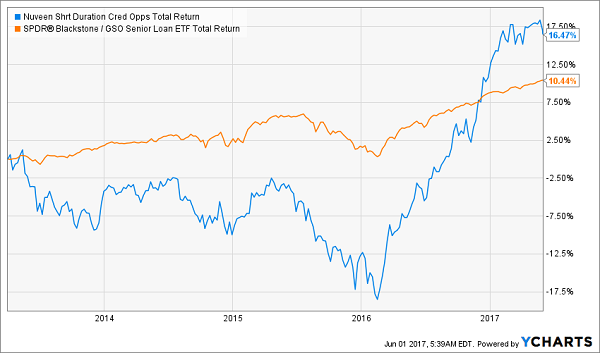 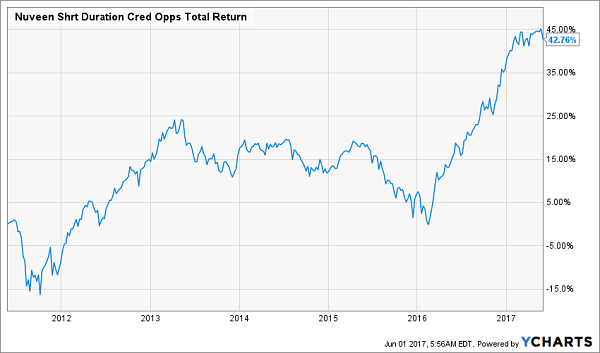 I love municipal bonds because of their sneaky high yields thanks to the tax-exempt nature of their income. Remember: Municipal bonds – so, debt from entities such as states, counties and cities – are exempt from federal taxes, and if you live within that entity, you also can be exempt from state and local taxes, too.

Closed-end funds are a popular way to invest in the muni space, and the MFS High Income Municipal Trust (CXE) is one of the premier offerings in that group. The CXE holds 786 municipal bonds, mostly of longer maturities (80% of its bonds are 15 years or longer), with its strongest state concentrations coming in California, Texas and Illinois (8%-plus each).

Like the other funds on this list, CXE compares well to exchange-traded counterparts like the SPDR Nuveen S&P High Yield Municipal Bond ETF (HYMB) – it’s just a bit more volatile thanks to the fund’s use of leverage. But it’s hard to argue with the CXE’s performance and its nearly 10% tax-equivalent yield.

MFS’ CXE Is a High-Income Powerhouse 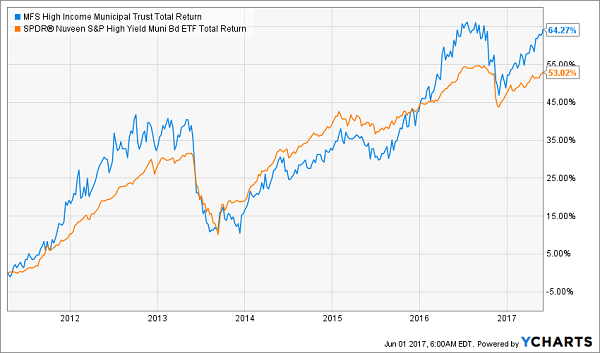 High income is one of the three pillars every retiree needs to lean on in retirement. But you also need dividend growth and the potential for capital gains – otherwise, your portfolio will eventually be eaten away by inflation, and your retirement will be set back by years!

The best path to retiring comfortably, then, are stocks that have all three pillars – the kinds of “triple threat” stocks you’ll find in my “No Withdrawal” retirement portfolio.

The path to this ultimate basket of retirement stocks wasn’t easy. My research led to dead end after dead end as I had to weed out yield traps and value traps alike. But the effort was worth it – after months delving into high-income assets like REITs, BDCs and other stocks, I’ve finally compiled a can’t-miss portfolio featuring:

It’s not greedy to go after all three of these qualities – in fact, it’s the only way to retire the way you’ve always planned. That’s because high yield, dividend growth and the potential for high capital gains will allow you to live off income … and actually grow your nest egg at the same time!

Many recommended blue-chip stocks only yield 3%, maybe 4% if you’re lucky. But do the math! Even if you’ve saved up $500,000 for retirement, 4% annually is just $20,000 a year. You and I both know that even with Social Security tucked in there, you won’t be able to afford the retirement you’ve been working toward.

The 8% average yield on my “No Withdrawal” portfolio – as well as the dividend growth that will yield to double-digit yields on cost over time – will ensure you have all the income you need to pay the bills (and then some). Meanwhile, the growth potential of these picks will help grow your nest egg in retirement, which is essential should you ever need to pay for a big one-time expense, whether it’s an emergency or just buying a vacation home.

This all-star portfolio features the very best of several high-income assets, from preferred stocks to REITs to closed-end funds and more. That means diversification and continued payouts regardless of how volatile or bearish the stock market becomes.

Let me show you the path to a no-worry retirement. Click here and I’ll provide you with THREE special reports that show you the path to building a “No Withdrawal” portfolio. You’ll get the names, tickers, buy prices and full analysis of their wealth-building potential – and it’s absolutely risk FREE!