Let’s not be idiots chasing this bear market rally. OK?

Safe dividend stocks, fine. That’s what we’re going to talk about today. A trio of stability and sanity that doesn’t care if we see a September swoon or October keel over.

Yes, in bear markets like these we sell the rips. But we still buy the dips—we just make sure we do it smartly. And keep it low beta.

In reality, it can be even better. DUK is up 9% year-to-date while the broader market has been whacked. Let’s start here.

What better place to start our low-beta search than the utility sector.

Again, a beta of 1.0 means that a stock is every bit as volatile as the S&P 500—no more, no less. Utility stocks as a whole have a five-year beta of roughly 0.5, which means they’re effectively half as volatile as the broader market.

And Duke Energy is even less volatile than that. 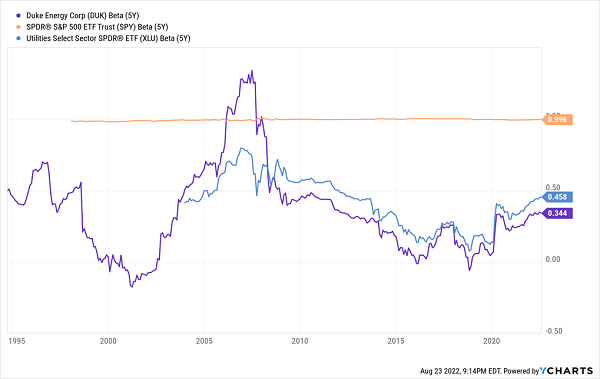 As far as the company itself goes: Duke Energy is one of the largest utilities in the game, serving 8.2 million electric customers in six states and another 1.6 natural gas customers in five states.

Providing electricity and natural gas isn’t exactly a high-growth industry. Many utilities can’t grow because they’re geographically entrenched, except through acquisition. So, the only way revenues can go up is through modest rate increases over time—and population growth.

Consider that Duke’s ace up the sleeve. It has a significant presence in four of the top 10 states in numeric population growth from 2020-21:

This growth should allow DUK to keep raising its dividend despite a fairly hefty payout ratio of more than 80% of profits currently. One weak spot for Duke is unfortunately one that most utilities share: slow payout expansion. To wit, Duke’s most recent hike was a mere 2% uptick (to $1.005 per share). 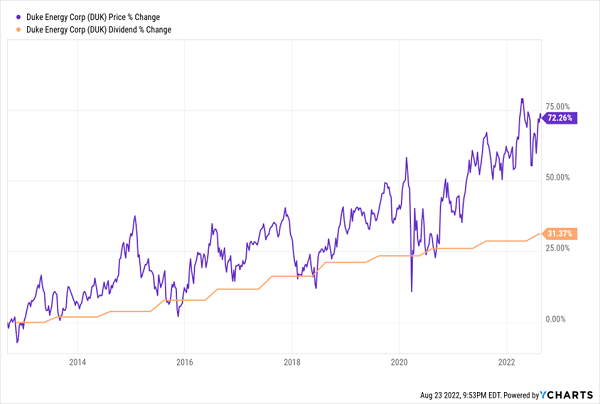 It does, however, keep DUK’s yield well ahead of the sector average and more

We’ll find a slightly brisker rate of dividend growth at Flowers Foods (FLO), which produces many of the products sitting in your pantry right now.

Flowers Foods is a U.S.-centric bakery specialist that registered more than $4 billion in sales last year. Its many brands include Nature’s Own, Dave’s Killer Bread, Sunbeam and Wonder Bread, as well as Tastykake and Mrs. Freshley’s snacks.

If you’re a regular reader, you’ll know that I recently discussed the mega-trend that should power certain food stocks for years to come. Flowers Foods is what I would call a second-tier beneficiary of this trend—while it’s not providing the basic raw inputs the world will need, it’s still responsible for one of the most basic staples for millions of Americans.

You might wonder about just how durable its business is, however, given a fairly weak second-quarter report that saw revenues fall under the Street consensus. But it’s likely that Flowers’ weakness stemmed from its move to raise prices along with inflation—which it did earlier than most competitors. So while price-conscious consumers might have moved to other brands in the short-term, they’ll likely return as other brands hike their own prices to keep up with spiking input costs.

Otherwise, FLO has spent the past six years raising its dividend by a penny per share annually, which came out to a roughly 5% raise in 2022. That and a yield not much higher than 3% aren’t anything to scream about, but you can’t find many steadier hands in the market—FLO’s five-year beta of 0.27 means the stock has been about a quarter as volatile as the market over that time.

FLO: Slow and Steady Won’t Win the Race, But It Will Finish Respectably 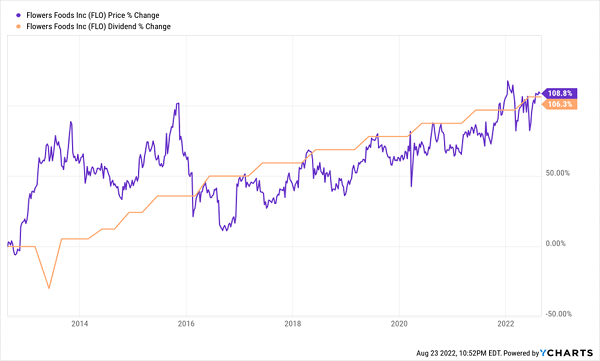 Kimberly-Clark (KMB) is another staples specialist like Flowers Foods, though its contribution lies primarily at the other end of the digestive system.

For the past century-and-a-half, Kimberly-Clark has been one of the globe’s leading producers of personal care items, building a toilet-paper-and-diapers empire that now spans more than 175 countries. You’ve assuredly used one of its brands at some point in your life—Scott or Cottonelle toilet paper, perhaps, or Viva paper towels, Huggies or Pull-Ups diapers, Kotex tampons and pads, or Depend adult care products, among many, many more.

This line of products have fueled a long-lasting payout: Earlier this year, KMB marked its 88th consecutive year of paying a dividend—and its 50th consecutive annual hike, which has kept it in the ranks of the Dividend Aristocrats for the past quarter-century.

But they haven’t powered much share performance, at least not of late.

Get Out the Plunger—KMB Is Stuck 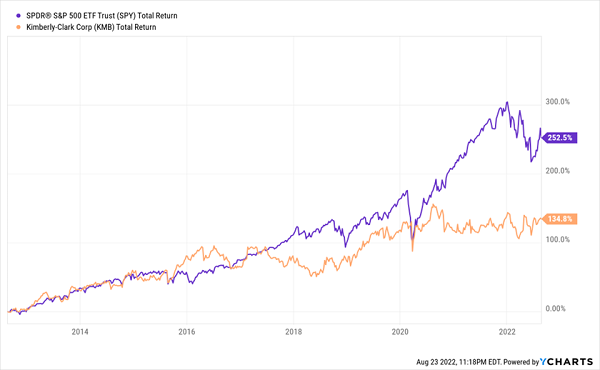 Like with FLO, KMB has struggled with input costs of late, though it still managed to produce outstanding 9% organic revenue growth last quarter that blew through analyst estimates. Which makes sense—Kimberly-Clark’s products are too difficult to go without, and even as it hikes prices, many of its brands remain the most competitive on cost.

Still, KMB is hardly invincible; the company mentioned on its most recent call that customers are trying to find savings wherever they can, including moving to private-label products.

Meanwhile, its dividend has looked challenged, too. Its 2022 payout hike was less than 2% (to $1.16 per share). This is not surprising given a maxed-out payout ratio of 87%!

We might not necessarily want to jump into KMB or FLO, but we do want stocks that share one of their most attractive traits:

Selecting companies with a proven track of increasing their dividend payments is the safest, most reliable way to get rich in the stock market. And I want to show you how it’s done. Click here for my exclusive private briefing and discover my top 7 Recession-Resistant Dividend Stocks With 100% Upside!