9 Stocks To Buy Before This Summer’s Rate Hike

Stop me if you’ve heard this lie before…

It’s a lazy blanket statement that, for the most part, just isn’t true. And that presents great opportunity for us income investors with a contrarian mindset. We can look past the first-level headlines to the second-level facts – and build a portfolio that will actually outperform after summer’s rate hike.

About that hike – it’s not a foregone conclusion, but the “smart money”, or traders who actually place money on the various likelihoods, believe there’s a 53% chance of a boost by late July:

That’s a big shift from a month earlier, when traders were only pricing in an 11% chance of a hike by then. If you own high yield issues, you noticed the shift in your portfolio – as the first-level types dumped shares in a panic!

Let’s put this in perspective. Looking ahead to next year, the smart money is betting on one or two rate hikes between now and then. That’s not exactly an earthquake.

It is, however, an argument for meaningful yield – which I define as 6% or higher. It’s easy to see why slow-growing utilities paying just 3.3% on average are questionable investments today. But even after two more rate hikes, if they happen, we’ll still be a long way off from seeing real fixed income competition for my favorite 6%+ issues.

Most likely, we’ll never get there. Today’s economy can’t handle yesterday’s normalized rates. But let’s plan for the worst-case scenario – the last takeoff in rates. In June 2004, Fed chair Alan Greenspan began boosting rates from then-historic lows. Over a two-year period, he increased the federal funds rate from 1% to 5.25%. Now THAT is an earthquake.

REITs Did Better Than Fine – They Outperformed

Before the December Fed meeting we discussed the importance of owning REITs that regularly raise their payouts. This is true most of the time, but especially during rising rate environments. The healthcare REITs we love so much did great provided they were able to boost their dividends. 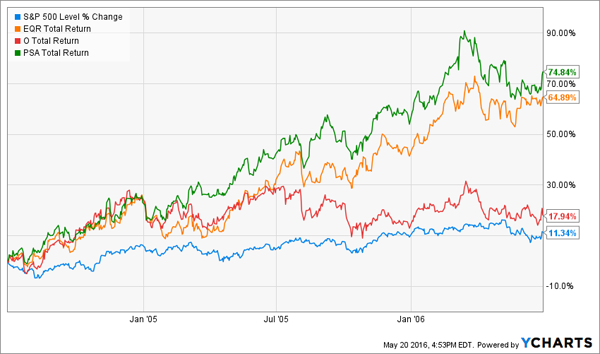 Municipal, or muni, bonds tend to pay low interest rates thanks to their low default rates (according to Moody’s, only 0.03% of munis have defaulted since the financial meltdown of 2008). So you would think their safe low yields would come under fire with competition from Uncle Sam’s even safer paper.

But that wasn’t the case. In fact, boring old muni bond funds actually beat the market during that two-year period too! The Nuveen Enhanced AMT-Free Muni Credit Opportunities Fund (NVG) returned 19.1% over this two-year period, while the Nuveen Enhanced Municipal Credit Opportunities Fund (NZF) and PIMCO Municipal Income III Fund (PMX) more than doubled up the market with 25.4% returns each:

Rising Rates No Problem for Munis 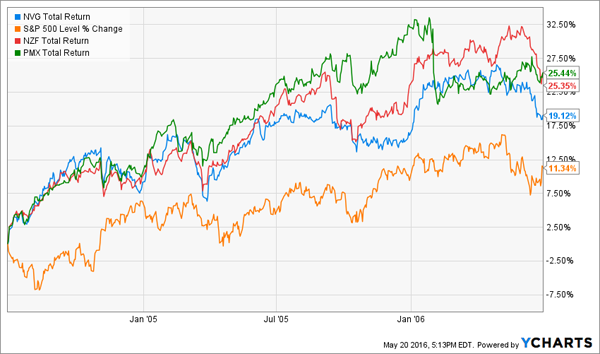 One key for munis is that their yields are often federal tax-exempt. If you’re in a 25% tax bracket, a 6% payouts equates to an 8% taxable yield. In the top 43.4% bracket? You’re banking a 10.6% equivalent payout.

I prefer to buy munis via closed-end funds like NVG, NZF and PMX for three big reasons. First, they can use leverage to boost yields. With rates low, it’s easy money. Second, they have active managers to hand pick higher paying issues. And third, they tend to sell at discounts to their net asset value (NAV) from time-to-time.

For example, if you see a closed-end muni fund selling at a 10% discount to NAV, you’re able to buy all the bonds it holds for just 90 cents on the dollar. Which means you’re likely to enjoy price upside as the discount window closes – plus you collect an outsized yield (the discount acts further juices the yield, which is based on NAV) while you wait.

While there aren’t any muni funds I like selling at double-digit discounts, some other closed-end funds are. And guess what? They performed well in the 2004-06 time period, and are likely to do as well over the next couple of years too.

The Eaton Vance Limited Duration Income Fund (EVV) takes a different angle, purchasing institutional and corporate bonds rather than common stock. Its top holdings include Freddie Mac bonds that pay 7.7% and Sprint (S) paper that pays 9%. These add up to a distribution rate of 8.3% at NAV, which turns into 9.3% thanks to EVV’s current discount.

Speaking of which GDV, CSQ and EVV have two things in common. First, they sell at 10% discounts to their NAV. Second, they all outperformed the market during Greenspan’s aforementioned run:

Higher Rates Were No Problem for Top Closed-Ends 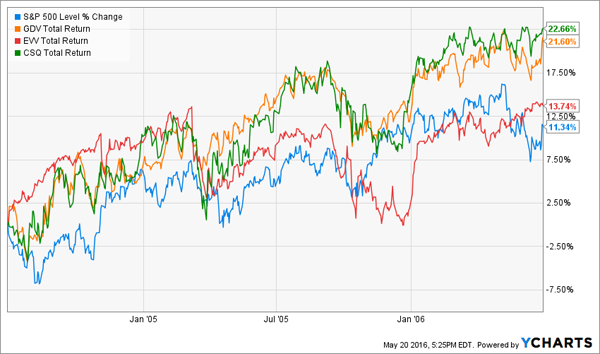 Bond God Jeffrey Gundlach recently pounded the table about this asset class. He believes they have 20% upside in addition to their gaudy payouts of 7% or better.

I’ve identified three more closed-end funds I like even more that pay 8%, 8.4% and 11% respective AND have 15% additional price upside to boot. Ironically the Bond God can salivate over these investments, but he can’t buy them – that’s the curse of managing billions of dollars. If he tried to buy these $1-2 billion market cap issues, he’d move the entire market and eliminate the “free money” bargain.

But you and I don’t manage billions, of course – so we don’t have this problem. We’re free and clear to buy these tickers and enjoy secure 8-11% annual yields with 20% price upside no matter what the Fed does.

Find out why the Bond God is so bullish on these income plays and get the names, tickers and breakdown of my top three picks right here.