A Downturn in 2023? Maybe Not for These Low-Vol Plays

We are heading into the most telegraphed recession in American history. Federal Reserve Chair Jay Powell said it himself last month:

Gee Jay, no kidding. Your Fed is squeezing us directly into a slowdown with these short-term rate hikes and balance sheet drawdowns.

Now I’m not saying it’s the wrong move, Jay. You printed a lot of money in 2020—so much that we fell way behind the inflation curve in 2021. Economic indicators and price numbers are still running hot.

So I’m not surprised to see your feet on the breaks for most of the year. But let’s call it like it is.

A recession is the only way we’re going to tame inflation at this point.

An inevitable economic slump is on the way. Which means we need to focus on low-volatility dividend stocks. The trade is picking up speed already. Low vol has been “less bad” than the market-at-large in 2022: 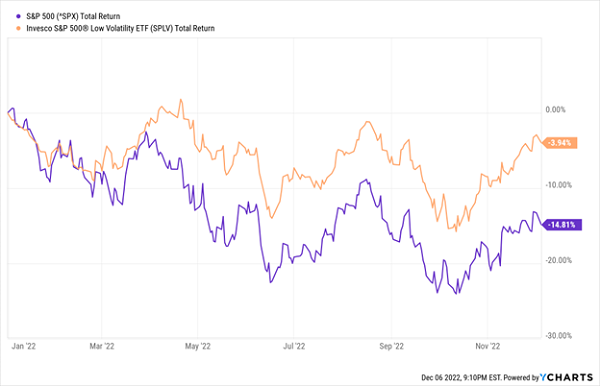 Low-beta winners keep us sane, and they keep us paid—and as a pleasant surprise, there are a fair number of them to choose from. These eight payers stand out for their combination of good-to-great yields (5.2% to 9.5%!) and their low volatility over both the short and long term.

Let’s review a few by sector. And oh by the way, you’ll notice a pattern to these industries—they are all safe with recession-resistant aspects to the businesses that operate in them.

Page one of the recessionary playbook is stocking up on consumer staples when times get tough. Because when money gets tight, you might not buy AirPods or another pair of Nikes, but you’re still heading to the grocery store to pick up bread, mouthwash and toilet paper.

Or, you know, cigarettes and eggs.

Universal Corporation (UVV, 5.6% yield) is a big name in tobacco, just one you probably won’t recognize. That’s because it doesn’t pump out Marlboros or Dunhill—instead, it’s the tobacco supplier for producers across 30 companies on five continents. And as a “sweet” diversifier, about 15% of its revenues is derived from a separate ingredients operation that includes FruitSmart, Shank’s Extracts and Silva International.

In other words, rather than putting all your chips behind one or two brands that could suffer from consumer fallout, UVV represents an ultimate behind-the-scenes play on a wide number of brands. That business model has powered more than 50 years of consecutive dividend increases. And it’s a pretty quiet holding to boot. Universal features a low 0.7 five-year beta and a scant 0.3 one-year beta. (Remember: The market’s beta is 1, so anything less than that is considered less volatile. UVV? Considerably so.) 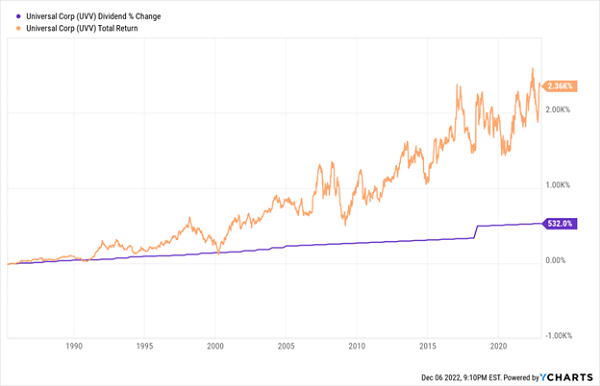 On the foods front: Your mind might float to large, diversified companies like PepsiCo (PEP) and General Mills (GIS), but Cal-Maine Foods (CALM, 5.8% yield)—which I highlighted just a couple months ago—still looks like an underappreciated winner. To be clear: I don’t expect CALM to repeat its 2022 fortunes (up 60% with a month to go!) given that “perfect” inflationary pressures probably won’t repeat. But it’s hard to go wrong with the stability of the mighty egg. My only complaint is an inconsistent dividend that’s tightly tethered to financial results, but that’s not as much of a concern if CALM is a short-term defensive play—which it certainly seems to be, especially at a short-term beta of below 0.5.

Decidedly not a textbook recessionary play are financial services, which typically demand a sturdy economy for strong stock results. But here, a couple of companies appear to flip the script.

Northwest Bancshares (NWBI, 5.6% yield), in 2022, has been pulling away from the sector. It’s the holding company behind regional financial Northwest Bank, which has operated for more than 125 years across 142 full-service community centers in Ohio, Pennsylvania, Indiana and New York.

What’s especially attractive about NWBI for a coming recession is its credit and positioning in lower-risk loans across many more rural locales. That has guided Northwest well in 2022: NWBI shares boast a smooth 1-year beta of 0.4, and YTD, Northwest has delivered breakeven performance against a down financial sector and regional banking industry.

NWBI has also been able to maintain steady upward pressure on its dividend for years, though it’s also plowing capital into organic growth. Short-term rate-hikes should at least keep the needle pointed in the right direction. 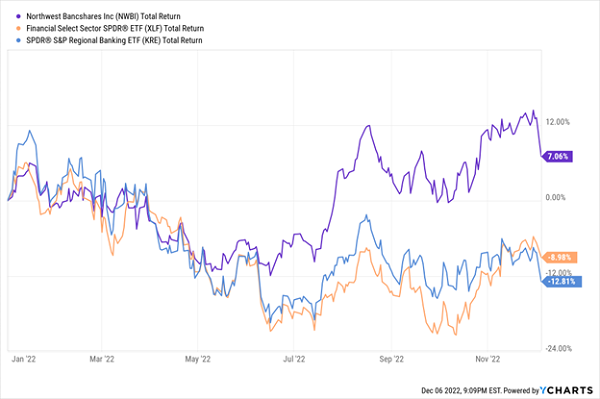 Also worth mention is Illinois-headquartered insurer RLI Corp. (RLI, 6.3% yield). RLI is a specialty insurer whose lines include business insurance, personal insurance and surety bonds. Of note is continued rapid growth in its property business, and several analysts are anticipating double-digit earnings growth in 2022. Pair that with one- and five-year betas of 0.6 and 0.4, and there’s a lot to like on RLI’s face heading into 2023.

Curiously, the yield on RLI is a false flag: 5.4 percentage points of that 6.3% can be attributed to a $7-per-share special dividend chalked up to the sale of the company’s interest in Maui Jim sunglasses. (No, really.) But why am I still interested? A KBW analyst scrutinized the dividend press release and noted the special represented “some of” the excess capital from the sale. “We consider RLI a very conservative steward of capital that does very few transactions, and—at the risk of reading too much into two words—see this as signaling very strong organic and/or inorganic 2023 growth prospects.” That intriguing tidbit makes RLI one of the few rare watch-list stocks in an otherwise uninspiring sector for next year.

Real estate investment trusts (REITs) were, to be blunt, a bust in 2022, significantly underperforming the market despite their far superior income generation.

Still, even here, a few low-volatility exceptions bucked the trends and could be strong in 2023.

Monthly dividend payer LTC Properties (LTC, 5.9% yield) continues to try to shake its pariah status from the earliest days of COVID, when senior and long-term care became stocks non grata. (At the bottom, LTC had lost half its value.)

But occupancy trends are heading in the right direction for LTC, a 50/50 blend of senior housing and skilled nursing facilities that’s spread across more than half of the United States. Also providing stability is a monthly dividend that yields nearly 6%, as well as a one-year beta of 0.5 indicating a stock that’s only half as wiggly as the broader market.

Then there’s Getty Realty (GTY, 5.2% yield)—a net-lease REIT that has been something of a unicorn in 2022. Why? It’s boring! Yes, it’s massive, at more than 1,000 properties across 38 states and Washington, D.C. But these aren’t exactly destination locales: BP (BP) gas stations, 7-Eleven convenience stores, Valvoline (VVV) auto parts and service centers. And the financials are every bit as dull. As I mentioned recently, Baird analysts highlight Getty’s “low leverage, no near-term debt maturities, and no apparent issues on the horizon.” At 0.7, Getty has one of the highest betas on this list—and it’s still drowsy compared to your typical S&P 500 stock.

Getty: No Sex Appeal? No Problem. 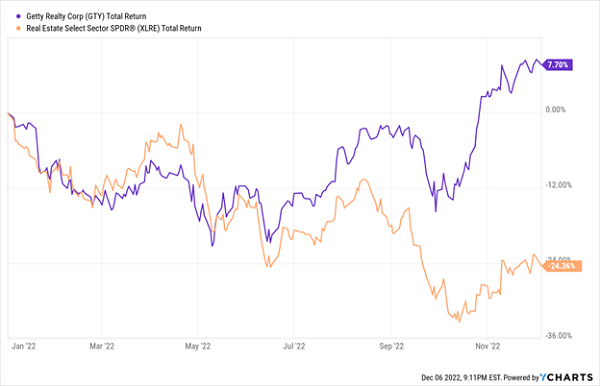 While I recently suggested CIR readers cash in our 114% gain in a prominent energy holding, we’re hardly done with oil yet. Even with crude currently at a yearly low, China remains mostly closed, Russia remains at war with Ukraine, and a number of other pressures could yet again pop the top on Texas Tea.

Houston-based oil producer Coterra Energy (CTRA, 9.5%) is a name that has popped up on my radar again and again in recent months. It’s a major player in Texas’ and New Mexico’s Delaware Basin, also boasting acreage in the Marcellus and Anadarko basins.

Yes, CTRA, like most energy stocks, have taken off thanks to largely higher crude prices across the year—and yes, a recent pullback in crude threatens to claw back some of those gains. 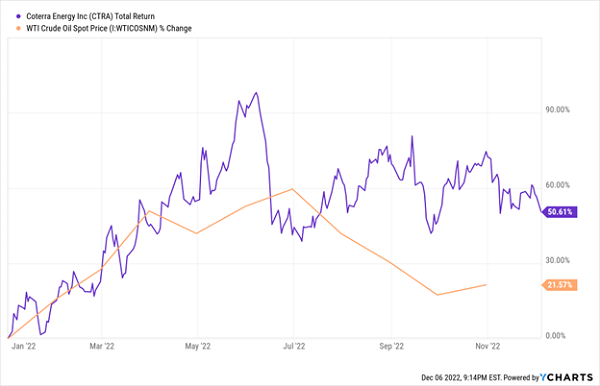 But CTRA stands out for its operational gains over the past few years. Heavy investments in production improvements have helped Coterra squeeze more cash out of every drop of oil. And rather than aggressively turning that cash into a completely fixed dividend program, CTRA has elected to combine regular and special dividends—a conservative approach that should still ensure a decent dividend “floor” even if oil prices dry up.

A note: Coterra is the “wildest” stock on this list at a 1-year beta of 0.9, but that’s largely been because of extreme upside. Longer-term, it’s one of the calmest performers at a 5-year beta of 0.5.

If you’re looking for a more traditional name, with a more traditional payout schedule, it’s hard to ignore energy infrastructure giant Kinder Morgan (KMI, 6.2% yield). It’s mammoth, sporting roughly 83,000 miles of pipelines and 141 terminals. And it’s diversified, dealing in everything from natural gas and crude to chemicals and even vegetable oils.

I’d be remiss not to mention that Kinder Morgan is a somewhat tainted name given the near-collapse of its dividend in 2015. But that forced the company to become a more responsible steward of its capital, and it has in turn become a more reliable dividend stock with a still-high yield.

As an infrastructure play, KMI’s returns look less like the bodacious jumps from E&P names, and more like the rest of the MLP field. But it has still calmly delivered 20%-plus gains in 2022 with about 60% of the market’s volatility.

All of the eight stocks above sport the kinds of pivotal strengths we need as we march right into the mouth of a likely recession.

But the ultimate survivors of 2023 will need to share one trait above all others:

And now, they look like they could be the market’s best protective plays heading into a turbulent 2023.

Selecting companies with a proven track of increasing their dividend payments is the safest, most reliable way to get rich in the stock market. And I want to show you how it’s done. Click here for my private briefing and I’ll tell you more about my top 7 Recession-Resistant Dividend Stocks With 100% Upside!