Can You Spot the Next 830% Dividend Grower?

I don’t blame you if you think stock picking boils down to a choice between income or growth. That’s how the financial media has framed it for years.

But it’s not. Not by a long shot. In fact, for years, my Hidden Yields service has shown investors that rapidly growing dividends are something of an “early alert system” for red-hot price appreciation. That’s why I always keep an eye out on regular dividend growers, like the list of 56 stocks whose names and tickers I’ll share with you momentarily.

Don’t believe me? Consider this: Right now, one of Wall Street’s most popular blue-chip growth stocks is also paying out a mind-blowing 12.9% yield to some very lucky investors.

Broadcom (AVGO) is a telecommunications semiconductor specialist that’s shaping up to be a major player in the rollout of 5G technology. At the moment, it yields a plenty respectable 4.1% yield at current prices … but shareholders who got in just five years ago, after the company showed plenty of evidence that it planned to be a serious, serial dividend grower, are enjoying so much more. 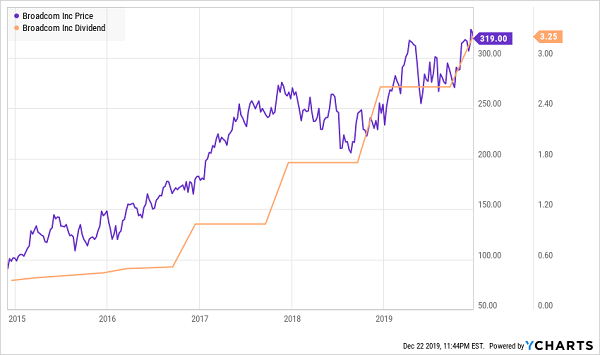 Since late 2014, Broadcom has sent its payout to the moon, with nearly 830% worth of increases. The reason why its current yield is so relatively modest is because shares have more than tripled during the same time frame. But the yield on cost for anyone who bought in around $101 per share a half-decade ago is nearly 13%!

You can find similar breakout stories all across the market.

That’s because aggressive dividend hikes act like a magnet for new money. Any company can announce a token improvement to the payout, but when investors see a double-digit raise, they know there’s an overwhelming chance that there’s a legitimate growth story and real financial strength backing it.

It’s so easy to overlook these kinds of stocks because they often sport modest current yields. Go back to the Broadcom example—it offered a paltry 1.4% five years ago. But today, AVGO is a $125 billion semiconductor behemoth that yields like a third-world bond.

So check out these 56 dividend growers that I’ve divided into four categories: Dividend Aristocrats, MLPs, noteworthy stocks and REITs—that habitually improve their dividends during the first quarter of the year.

If you want to land the next dividend trifecta, this is where you should start your search.

A refresher on the Dividend Aristocrats: At the moment, this is a group of 57 stocks in the S&P 500 that have raised their dividends at least once annually, without interruption, for at least 25 years. That said, many stocks have far longer streaks, such as Genuine Parts Company (GPC), which has been upping the ante for more than six decades.

Fair warning, though: Dividend Aristocrats are like any other group of stocks: There are studs, and there are duds.

Dividend Spotlight: Walmart (WMT) enjoyed a renaissance in 2019, outperforming the market with 29% gains extremely late into the year. The company’s e-commerce answers to Amazon.com (AMZN) have surpassed even some of the wildest dreams, leading some analysts and former retail chiefs to believe that Walmart actually poses a threat to Jeff Bezos & Co.

The one thing that might grate shareholders, however, is its quarterly cash payment. While WMT has compiled 46 consecutive years of payout increases, it is averaging 2% dividend growth annually over the past half-decade—a pace nestled tightly between “slug” and “snail.”

It’d be nice to see a little something extra out of Walmart come late February.

That said, I’m highlighting a few of the industry’s bigger names that have adopted a healthy habit: padding their payouts quarterly, not annually like most stocks.

Dividend Spotlight: Enterprise Products Partners (EPD) is one of the most prolific dividend growers on this entire list.

This MLP is a whale of a “midstream” operator, which means that it tackles the transportation/storage part of fossil fuels’ journey from the ground to consumers. Specifically, the company boasts a mammoth 49,200-mile network of pipelines transporting natural gas, natural gas liquids (NGL), crude oil and other products; storage operations; natural gas processing plans; NGL and propylene fractionators; and a few import/export terminals.

This business is less sensitive to fluctuations energy prices, because what matters most is that energy is simply flowing through its infrastructure. That has allowed EPD to put together an impressive string of 61 consecutive quarterly distribution hikes, not to mention double up the Energy Select Sector SPDR Fund’s (XLE) performance in what was a lousy 2019 for traditional energy stocks.

We’ll move on to the biggest chunk of expected dividend raises—from real estate investment trusts (REITs)—in a moment. But first, here are some of the more interesting companies that could add to their payouts over the next three months.

Dividend Spotlight: This might be your first time coming across the name Albemarle (ALB), so here’s the skinny. This specialty chemicals company joined the S&P 500 just a few years ago, in 2016. It leads the world in lithium, bromine and refining catalysts—ingredients that contribute to fascinating and/or vital end products such as lithium-ion batteries powering tomorrow’s electric vehicles, or systems that keep mercury out of our water.

But the business itself would put a can of Red Bull to sleep.

That’s OK! I always say boring is beautiful when it comes to dividend investing. And so it goes with ALB, which in 2019 notched its 25th consecutive year of higher payouts. That means that by the time it announces No. 26 in February, it should end up joining the Dividend Aristocrats.

Albemarle’s pace of payout raises has been good albeit not great, at roughly 6% annually over the past half-decade. That included a nearly 10% bump higher in 2019.

Real estate was running hot up until a couple months ago, though it cooled down over the home stretch while most of the rest of the market kept marching higher.

That’s no worry. REITs should end 2019 up by roughly 25% including dividends, which is a successful year in just about any investor’s book.

REITs often aren’t a source of breakneck dividend growth, which is why it’s especially important to keep watch for rapidly raising outliers. REITs by rule are required to distribute at least 90% of their profits as dividends. Thus, a big jump in the payout often means business is hopping.

Dividend Spotlight: Equity LifeStyle Properties (ELS) is exactly the kind of stock that gets me excited about the potential of dividend growth.

Equity LifeStyle Properties (ELS) Is Due for a Big Hike 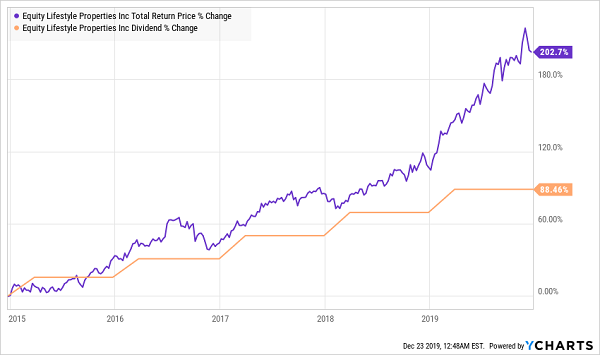 ELS owns and operates manufactured-home communities, RV resorts and campgrounds across North America. While I typically like plays that cater to the more affluent, Equity LifeStyle Properties meets a booming need that’s likely to continue going gangbusters for both economic and demographic reasons.

The company’s payout has already exploded by 90% in the past five years, which is particularly impressive for a REIT. But that progress is “hidden” by a tripling in the stock that has muted its yield to a mere 1.8%.

Equity LifeStyle Properties has reported an 8%-plus improvement in funds from operations (FFO, a profitability measure for REITs) through the first nine months of 2019. That kind of improvement bodes well for another healthy hike come mid-February.

Are you licking your chops thinking about stuffing some of these dividend growers into your portfolio?

Good. Because the time for getting your retirement house into order is now, before you suffer yet another year of underperforming the market and collecting mediocre income checks.

I mentioned earlier about how dividend growth has powered my Hidden Yields service. Now, I want to show you seven recession-proof “Hidden Yields” that can deliver double-digit returns, rain or shine.

Bull markets? They average 20% or more in total returns. Bear markets? About 12%—in gains, not losses. And yet, you never see these stocks touted on CNBC, Fox Business or any of the other major outlets.

The risks are piling up as we enter a contentious election year, as China and the U.S. are only on “Phase One,” and as the Federal Reserve says it will stay put … even though we’ve heard that story before.

The time to take action is now.