Some of the stock market’s best dividend stocks are hiding in plain sight. But today, I’m going to introduce you to four long, longtime dividend-growing powerhouses that yield up to 6.6%.

Wall Street has naturally slept on these companies simply because they’re not easily covered mega-caps like Coca-Cola (KO). That’s too bad because in many cases, their returns have shredded many blue chips with similar dividend histories.

This global chemical firm was founded in 1932, and currently boasts 18 manufacturing locations across the world. Like many industrial companies, it’s boring but makes our everyday lives better. It’s a leader in surfactants, which are pivotal in consumer and industrial cleaning compounds.

This company is more than that, of course. Its polymers are used in coatings, adhesives and sealants, and it even makes patented nutritional oils and other products such as Omega-3 triglycerides for heart and brain health, even hard butters used to make whipped toppings and pie fillings.

Not ringing a bell? OK, I’ll narrow it down for you.

Just a week ago, it announced a 10% upgrade to its cash distribution, marking its 52nd consecutive year of dividend increases. That’s good enough not just for Dividend Aristocracy, but Dividend Kingship. Only a handful of companies boast five decades or more of payout expansion. 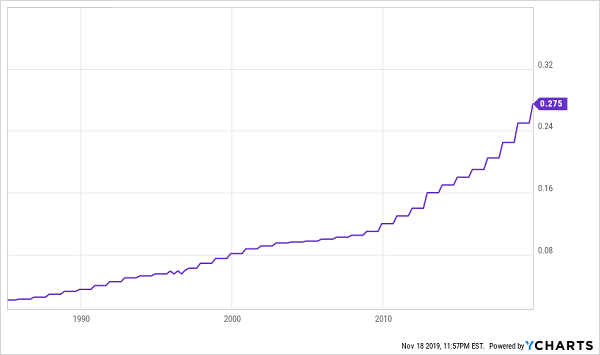 It announced its best year of annual earnings in 2018–the eighth consecutive time it has claimed a record yearly profit. And its stock has walloped the market several times over during the past two decades. 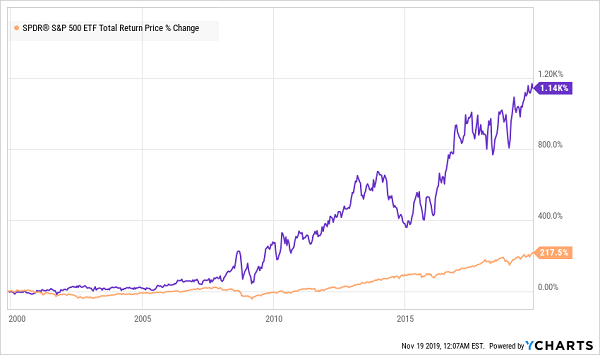 This kind of pedigree might sound like a Dow Inc. (DOW) or DuPont (DD). But it’s neither. They are too obvious. This is the handiwork of Stepan Co. (SCL)–a modest Illinois-based firm with a little more than 2,000 employees.

But you don’t have to search. I’m going to do the legwork for you. Today, I’m analyzing a four-pack of these well-off-the-radar dividend dynamos, including a 6.6% yielder, and a company that started its payout back when Harry Truman was in office.

But remember: boring is where the cash is.

Old Republic’s roots go back all the way to 1887, though the company in its current form as a specialty insurance business dates back to 1923. (Its dividend isn’t much younger, at 77 years of consecutive payouts and counting.) ORI provides property, title, mortgage guaranty, life and health insurance, among other products.

Like many other financial companies, ORI has been in recovery mode since the Great Recession – but it’s also been relatively slow to catch up. Old Republic itself writes that its business still was affected by the fallout of the Recession into 2017, and its share price only recently eclipsed its 2007 highs. It has been in rally mode for the most part since late 2011, driven by mostly steady revenue and income growth. Yes, there was a significant hiccup in 2018—profits sank by more than a third—but that was largely the product of an accounting-rule change that hit much of the industry, including the insurance businesses of Warren Buffett’s Berkshire Hathaway (BRK.B). ORI is en route to normalization this year.

The real story here is the dividend. Because not only has the company improved its regular payout without interruption for 38 years, but this year and last, the company also has dropped a $1-per-share special dividend into investors’ laps. That ramps its yield up from about 3.5% on the regular dividend to a whopping 7.9%.

Unfortunately, there’s no reason to believe future special dividends are likely, given the one-off events that spawned these past two payouts. Meanwhile, the regular dividend has been inching higher at less than 2% annually. Old Republic gets my respect for its dividend longevity. But considering the slowing dividend growth, so-so yield and lethargic future estimates, it doesn’t get my recommendation. 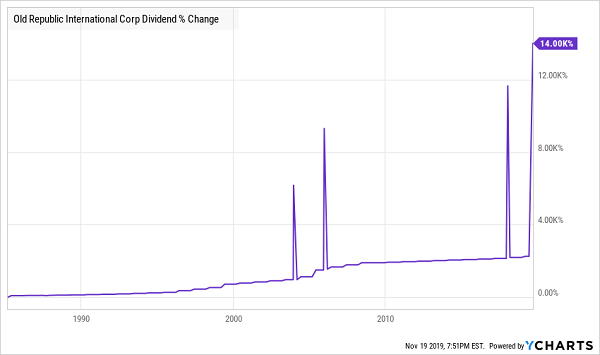 Lancaster Colony (LANC) is my kind of quirky company.

This is a consumer staples play. But unlikely mammoths like Kellogg (K) or General Mills (GIS) that boast literally dozens of brands, Ohio-based Lancaster has just five, and they’re relatively minor by comparison: Marzetti salad dressings, Sister Schubert’s and New York baked goods, Flatout flatbreads and new addition Bantam Bagels, which it picked up for just $34 million in 2018.

It’s no juggernaut, but this business has fueled years of unimpeded revenues and profits. Sales have climbed more than 18% between fiscal 2015 and fiscal 2019; profits have exploded by 48%.

Shares have galloped past the market over the past few years, though LANC stumbled significantly this year as it digested not just Bantam Bagels, but a $25 million buyout of Omni Baking Company—a move that gives it more control over its baked goods’ production. But the stock was jolted back to life in November after the company trounced financial expectations, thanks in part to the benefits of its two new acquisitions. Profits of $1.48 per share were up 4% year-over-year and beat estimates by 19%.

This mini-empire of garlic bread and Caesar dressing has powered 56 consecutive years of dividend increases, making Lancaster Colony an uber-rare Dividend King. Better still, the payout is less than half of Lancaster’s profits, leaving plenty more room for growth. And on top of it all, LANC sits on sturdy financial ground, too, with about $145 million in net cash.

The yield is simply too thin for retirement investors building an income schedule. But if you’re looking for growth with a dividend kicker, LANC fits the bill.

You should check out the full bull case here, but I want to augment that with a rundown of its impressive dividend streak.

National Retail Properties is another S&P MidCap 400 Dividend Aristocrat that has put together 30 consecutive years of dividend hikes. It’s one of just three REITs in the group, along with Tanger Factory Outlet Centers (SKT) and Omega Healthcare Investors (OHI).

The growth rate isn’t much to write home about, at 2.4% annually since the streak started. But:

National Retail Properties (NNN): One of the Toughest REIT Dividends 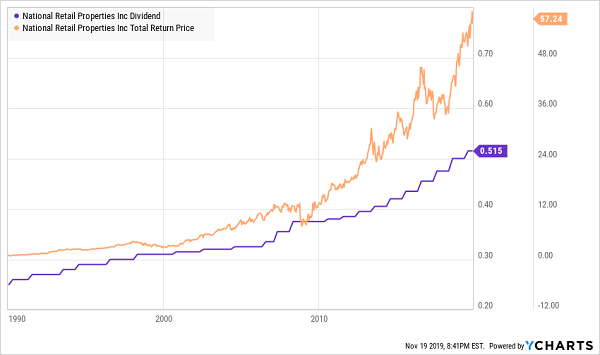 Meredith Corp. (MDP) is a media giant in its own right, even at a diminutive market cap of $1.6 billion. Meredith is the name behind People, Martha Stewart, Allrecipes, Better Homes & Gardens, Entertainment Weekly, Southern Living, Rachel Ray Every Day… you get the picture. It’s a magazine and digital-media powerhouse, and that doesn’t include its broadcast properties (primarily network-affiliated TV stations) that reach 12 million U.S. households.

I recently panned the soon-to-be-merged newspaper entity combining Gannett (GCI) and New Media Investment Group (NEWM). These are slash-and-burn outfits that will sap their own core businesses dry to pay shareholders.

Meredith’s hands aren’t clean. It has overseen a rash of layoffs following acquisitions over the years. That includes in 2018, when it announced layoffs (or planned layoffs) of about 1,800 workers within the yearlong period after it bought Time Inc. And while MDP sold off Sports Illustrated to Authentic Brands in May 2019, it still was the one to communicate the mass layoffs announced there that rattled the venerable publication.

But Meredith’s cuts haven’t been as deep as the newspaper industry, in part because of its broadcast arm, as well as targeted publications that still have some pull. That provides a little hope that Meredith won’t hack itself into pieces, a la Gannett and New Media.

The business itself is growing, albeit heavily through acquisitions. Revenues of $1.2 billion in 2015 swelled to $3.1 billion in fiscal 2019. Profits have bounced up and down, in large part because of its wheeling and dealing. And analysts are expecting a significant pop in profits next year, of about 20%, on 3.3% growth in revenues. 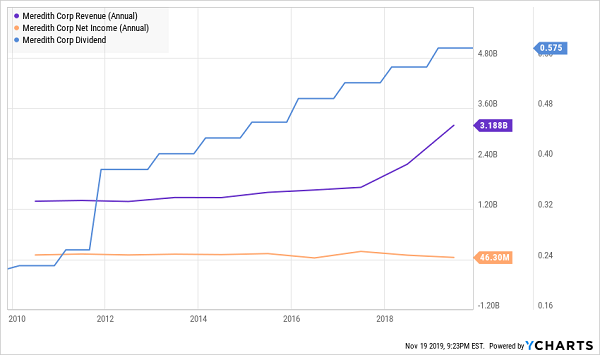 Meredith’s 6.6% dividend, which has grown for 26 consecutive years, is juicy enough to keep most income investors interested. But if it can actually find a way to sustain organic growth to boot, MDP might be a rare print winner.

The message is clear: If your retirement portfolio is nothing but the same five blue chips the pundits pump year after year, you’re doing it wrong.

Worse, these typically overpriced mega-caps are in for a rude awakening should the next recession cut expensive stocks down to size. That’s too much risk for your hard-earned nest egg, with too little return.

As we head into 2020, it’s time to get your retirement house into order. And you can do that by loading it with these seven recession-proof “Hidden Yield” stocks that can deliver double-digit returns, rain or shine.

It’s time to ask yourself: Are my stocks…

But this seven-pack of undervalued, overlooked and often outright ignored stocks, like poor ol’ Stepan, can safeguard your portfolio from even some of the most dire recessionary scenarios. They can deliver 20% returns annually in bull markets… but even 12% annually in bear markets.

The risks are piling up as we near a contentious election year, as China keeps jerking us around on trade, and as the Federal Reserve refuses stay put on a course of action. The time to take action is now.