Most of your friends are going to struggle to make any money in U.S. stocks for the next five to seven years. They’re battling not one, not two, but three major headwinds:

Historically, half of the stock market’s returns (or more, depending on the study you believe) have come from dividends. With the S&P 500 paying just 1.8%, the math isn’t promising.

An expensive market is also problematic because it makes rising multiples unlikely. The S&P index trades for 25-times earnings today – where can it really go from here but down?

Finally, rising interest rates are a concern for many income investors. Will their current strategies work when today’s cheap money gets a bit pricier?

The outlook is so grim that respected investment firm GMO predicts negative 3% annual returns for U.S. stocks for the next seven years. Meanwhile “Bond God” Jeffrey Gundlach says investors should sell or short the S&P 500 altogether.

I don’t disagree with GMO, Gundlach or other bears. Most American investors will struggle in the years ahead.

But you and I have the ability and know-how to do better. Much better. Twelve percent per year or better, to be specific.

With one simple strategy, we can tackle these three headwinds head-on and earn 12%+ annual returns while our friends and peers lament about the tough investing environment. Here’s how.

Our 12%+ Investing Strategy for Rising Rates

When interest rates rise, the best defense is a good offense. Research from Nuveen and Ned Davis shows that dividend growth stocks outperform everyone else in the 36 months after a Fed rate increase:

Stocks After the Fed Increases Rates

Everyone loves dividends, but dividend hikes are often underappreciated. Not only do they increase the yield on your initial capital, but they often are reflected in a price increase for the stock.

The solution is simple: Find higher yielders with strong growth prospects, and we’ll easily beat the market. After all, a 6% dividend plus 6% annual dividend growth equals 12% total returns.

Of course we won’t find these kinds of plays in the overrated, popular world of safe blue-chip stocks. We have to delve where fewer analysts delve: “boring” businesses, real estate plays and even international stocks.

So let’s review a four-pack of stocks that not only look like potential growth sources for the coming years, but that also yield at least 6% today, with 6%+ yearly dividend (and price) upside likely tomorrow.

Investors of just about every stripe are familiar with the idea of investing in airline stocks, such as Southwest Airlines (LUV) or Delta Air Lines (DAL).

But what about owning the terminals and runways that service them?

Grupo Aeroportuario del Pacifico (PAC) is not an airline operator, but an airport operator, and in fact the largest one in Mexico. It operates 12 airports in total, including 5 of the 10 most important airports by passenger traffic. Its portfolio includes two majors in Guadalajara and Tijuana, mid-size airports in places such as Mexicali and Los Mochis, and tourist-focused outlets such as La Paz and Puerto Vallarta. It also has a presence in Jamaica, operating Montego Bay Airport and owning Desarrollo de Concesiones Aeroportuarias, which controls a majority stake in the operator of Sangster International Airport.

All told, last year, GAP was responsible for servicing a quarter of Mexico’s total terminal passengers and nearly three-quarters of Jamaica’s.

Air travel is rapidly growing in Mexico; Volaris reported that CAGR for air travel was 9.8% between 2012-2016. That’s an enormous opportunity here, as well as in Jamaica, where PAC is going to bid for Kingston International Airport.

Grupo Aeroportuario’s dividend has grown like a weed as a result. 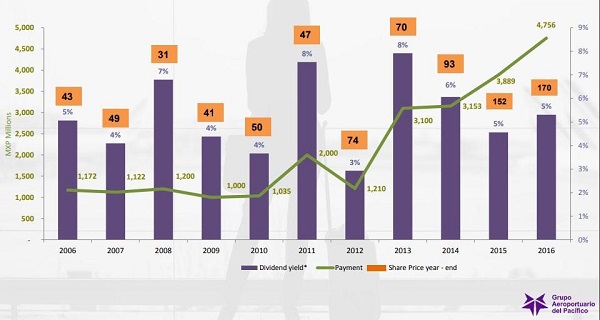 No, this is not as consistent a dividend as you’ll find in traditional U.S.-domiciled companies. But Grupo Aeroportuario clearly is comfortable with sharing the wealth, which means that as Mexican and Jamaican air traffic grow, so shall the income of anyone holding onto PAC shares.

Ventas (VTR) is one of the biggest names in healthcare real estate, but it has had a rough go of things for several months, dropping nearly a quarter of its value since the middle of 2017.

Let’s start with the basics. Ventas is a diversified REIT that’s most loaded up on senior housing communities (674), but also sports 358 medical office buildings, as well as a handful of life science and innovation centers, skilled nursing facilities and even three international hospitals, among other properties. Just less than half of those senior housing properties are “triple net,” too, which translates into more predictable net operating income. VTR used to feature more skilled nursing facility exposure, but it spun most of that off in 2015 to Kindred Healthcare (KND).

Much of the recent selling can be chalked up to interest-rate fears, but that has the market throwing babies out with the bathwater. Ventas is an excellently managed REIT that’s projecting 0.5% to 2% positive same-store NOI growth this year, while also planning to reduce its leverage. The company recently announced it will try to refinance $1 billion in debt to get out ahead of the Federal Reserve’s anticipated rate hikes.

One smudge I have to point out: The company did increase its dividend in December, as expected, but only by 2% to 79 cents per share, which isn’t particularly generous. Nonetheless, a roughly 75% FFO payout ratio and a 13x valuation on its funds from operation – both reasonable bordering on attractive, especially for a REIT that has so gracefully navigated its space for so long.

Digital storage REITs such as Digital Realty Trust (DLR) and CoreSite Realty (COR) have been the rage for some time. However, Iron Mountain (IRM) stand out because it’s far from your typical datacenter play.

Yes, Iron Mountain does have that – its digital services range from cloud storage and data centers to imaging and restoration/migration. But IRM also has its hands in brick-and-mortar. Or perhaps, more accurately, ink and paper.

Iron Mountain’s operations include secure storage and destruction services for physical documents. This includes everything from securely storing media tapes and file folders, with industry-tailored solutions for areas such as libraries, film and sound, and even the federal government.

The proof is in the pudding. Iron Mountain recently reported fourth-quarter and full-year 2017 results, and it enjoyed growth on both the top and bottom lines. Revenues grew 9% year-over-year to $3.85 billion, and adjusted FFO jumped 12% to $752 million. Months before those results came out, Evercore ISI’s analysts initiated IRM shares at “Outperform” with a $46 price target – another 40% upside from current prices – lauding Iron Mountain’s high yield and one-two storage punch.

Iron Mountain’s (IRM) Steady Business Is Starting to Pick Up 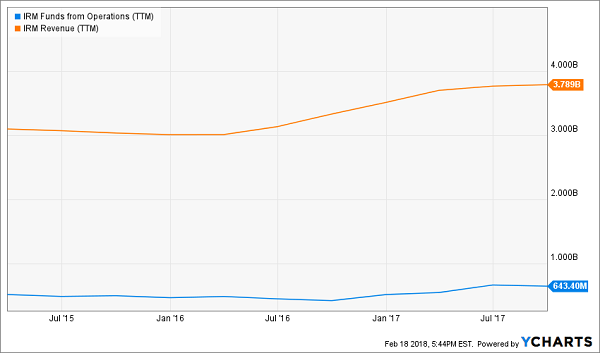 The Park Hotels (PK) bull case was playing out beautifully at the end of last year, but January and February happened, and you can guess what happened to shares. That said, a quick haircut has given investors another chance to jump into this fantastic play on the “experience economy.”

This is a relatively new real estate investment trust that was spun off by Hilton Worldwide (HLT) at the beginning of 2017 as part of a reorganization that also saw the hotel chain spin off its timeshare business, Grand Vacations (HGV).

Park hit the ground as one of the largest hotel-focused REITs you can buy, and currently boasts more than 35,000 rooms across 66 properties. They’re a diverse group, at that. The company’s U.S. properties are split into resorts (11), prime city center (9), convention center (7) and strategic airport & other (26), and it boasts another 13 properties internationally.

The REIT had a solid third-quarter report back in November in which adjusted FFO improved by 7% year-over-year, and that’s amid marginal continued impact from Hurricanes Irma and Maria.

Still, PK has pulled back by about 10% since peaking in January, and as a result, it’s trading less than 10 times its annualized FFO from 2017’s first three quarters. That, and a slightly more generous dividend, are plenty of reason to buy in.

All seven REITs in my 8% No Withdrawal Portfolio check both boxes for “dividend growth” and “high current yield” – a must-have for rising rate environments.