These 8% Cash Payouts Are Perfect for Rising Rates

It’s all but official: the Federal Reserve will hike rates three times this year, and almost certainly four. If you want to protect your portfolio (and profit), now is the time to prepare.

I told you what’s driving this inflation surge—and how long it may last—in my article last Thursday.

Today we’re going to look at 2 high-yielding closed-end funds (with a massive 7.9% average income stream between them). But before we get to that, let’s kick in the doors on the most foolish myth in investing.

The Backward Fear That Handcuffs Investors

I’m talking about the ridiculous belief that higher interest rates are bad for stocks and corporate bonds. I don’t know why this myth is so popular when it’s so easy to prove how laughably false it is.

In the mid-2000s, when the housing bubble was inflating, the benchmark SPDR S&P 500 ETF (SPY) saw an 8.5% gain per year, while long-term US Treasuries (which make up the iShares 20+ Year Treasury Bond ETF (TLT) pretty much flatlined: 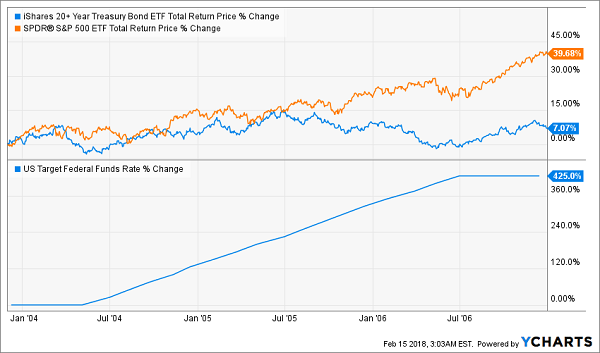 If that doesn’t convince you, look at this data from The Wall Street Journal. You can see that stocks rose for all but two periods when rates were rising since the 1950s. 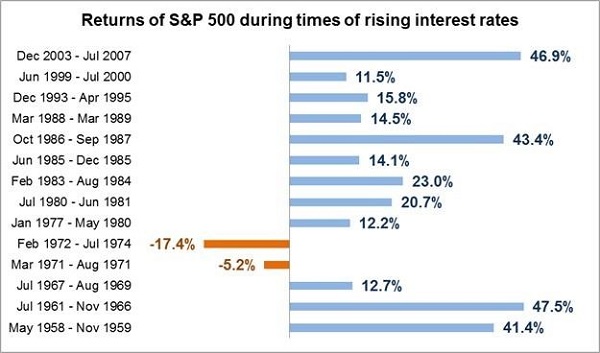 So the next time someone tells you that stocks go down when rates go up, tell them to go read a history book. It’s just plain false.

But with all that in mind, why won’t this fairytale simply go away?

It boils down to one thing: first-level thinking.

That’s when you have a puzzle in front of you and you think through the first step of solving it. Then, when you think you’ve got it, you move on without looking deeper. This is common in finance, and it’s also why so many investors underperform the market.

The first theory kind of makes sense, while the second is just plain wrong.

For one, higher yields mean the price of a Treasury you buy today will be lower tomorrow. That’s why TLT flatlined in the mid-2000s. Yes, some people will want to buy Treasuries because they can get a bigger income stream than they used to, but this is offset by professional investors who will short Treasuries in the secondary market.

As for higher borrowing costs, it’s true that companies will pay more on their debts when interest rates go up, but rising rates also spur firms to pay off their debts. Again, look at commercial loan delinquencies and the Fed’s interest rate target in the 2000s:

Interest Rates Up, Delinquencies Down

So let’s go beyond the first-level thinking here.

With second-level thinking, we realize that the Fed is increasing interest rates as a reaction to a surging economy. What happens in a surging economy? People buy more stuff, giving companies more profits with which to pay off their debts. And that’s what they do, lowering delinquencies and bankruptcies.

While rising interest rates may be a small problem for companies, they’re also the symptom of a much bigger story that is a good thing for companies.

And that’s where we are now.

With interest rates set to go up at least three times in 2018 and probably more in 2019 and beyond, we have at least a couple years of a strong economy to profit from. And there are 2 funds that are well positioned.

The first is the lowest yielding but also one of the most diverse.

The Gabelli Dividend & Income Fund (GDV) has a mix of large- and mid-cap companies in America and around the world, with a heavy emphasis on financial stocks. That makes sense, because financials tend to profit the most when rates go up.

GDV also gives shareholders a 5.9% dividend stream, but the best part is that it pays dividends monthly. Since GDV’s dividend is over triple what the S&P 500 pays, it’s a nice passive income provider, to say the least.

Another fund to put on your list is the PIMCO Corporate & Opportunities Fund (PTY), which yields a massive 9.8%.

One of the joys of owning PTY is that it’s a strong income provider and a massive market outperformer. The fund has beaten the S&P 500 for over a decade and will probably keep this up for another decade or more. That’s because PTY is managed by PIMCO, which has unique market connections and greater insight into the corporate bond market than most investors have.

And PIMCO has used that expertise to get PTY shareholders a 13.3% return per year for the last decade.

If you’re worried about how these funds will do when rates rise, again, look at history. Here’s how they did during the 2003–07 rising-rate cycle: 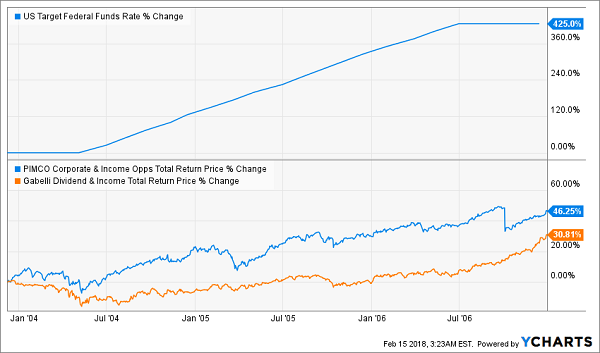 The takeaway: these are 2 funds you can use to profit from the booming economy and the higher rates it’s producing, instead of losing money by sitting in Treasuries or cash.

The 7.9% average yield these 2 CEFs give you is great … but you can boost your income and give your hard-earned nest egg an extra layer of safety when you add the 4 OTHER CEFs I’ll show you when you click here.

Because when you’ve got an 8% income stream rolling in and your retirement cash SAFELY spread out across real estate, US stocks, global stocks and bonds, you won’t have to worry about how high the yield on 10-Year Treasuries soars or how much the herd freaks out.

You can just sit back and collect your fat 8% income stream!

I’m ready to reveal these 4 unsung cash machines now. CLICK HERE to get instant access to the names, ticker symbols and my complete research on each of these 4 high-yield CEFs now.