With stocks looking choppy—and toppy—and more chaos flowing out of DC seemingly every day, you may be pondering taking some money off the table these days.

I have one word for you.

Because as I wrote on August 10, US companies are killing it on the earnings front, and that great-news story is getting completely lost in the breathless coverage of Trump’s latest tweet and saber rattling from North Korea.

At times like these, it’s best to remember the words of the world’s most successful investor, Warren Buffett: “Be fearful when others are greedy and greedy when others are fearful.”

That goes double for us dividend investors, because the recent market dip has bumped up dividend yields as prices head down—making now the time to buy! (By the way, that goes triple if you play in the high-yield CEF market, especially if you’re considering the 3 funds I pounded the table on last week!)

The trick is knowing which sectors are worth your time and which to avoid. So today I’m going to show you just that.

Let’s dive right in, starting with…

So far in 2017, we’ve seen energy collapse while all other sectors are showing positive gains. Tech is leading the way, with a big 18% rise, followed by health care (up 13%) and utilities (up 12%): 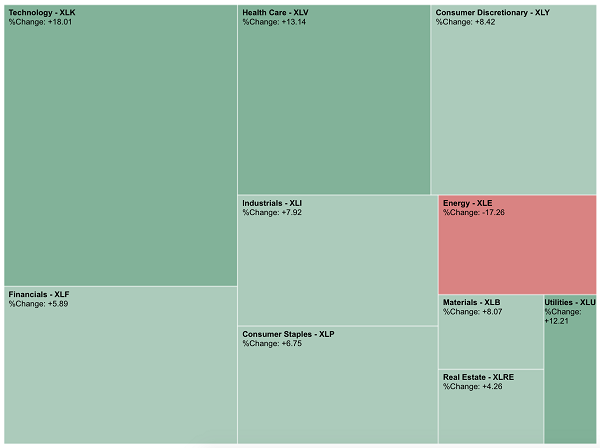 There’s a different story behind each of these three gainers and the collapse in energy, which you can also see in the heat map above.

Let’s take a look at where all 4 of these sectors have been and where they’re headed, starting with tech.

From Laggard to Leader

It’s obvious that technology is crushing everything else this year. A big reason for this is that the sector had an unimpressive 2016, when the PowerShares QQQ ETF (QQQ) rose a measly 4.6% versus the S&P 500’s (SPY) much better 8.6%: 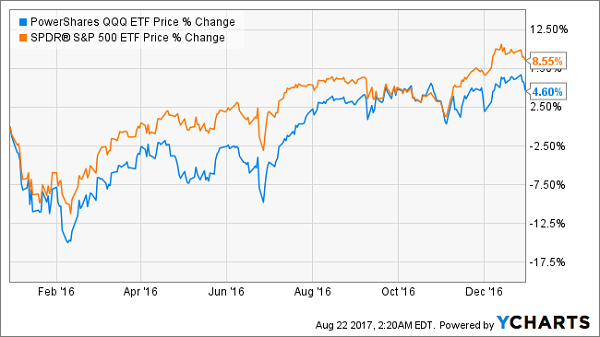 Again, no surprise—Apple was up 7.9% in 2016 and was one of the most volatile large cap stocks of the year, no thanks to a lot of fear-mongering press coverage about weak growth prospects (which, by the way, turned out to be wrong).

Being a contrarian and buying tech last year, when it was one of the weaker sectors, was a key to long-term success. And tech is still in a position for more gains—but we’ve already seen the momentum slow a bit, as the fastest gains have already come and gone.

Anyone who bought during its weakness in 2016, when everyone was terrified that new regulations would kill profits, would have easily beaten the market from then to now.

Buy the Dip Works Here, Too 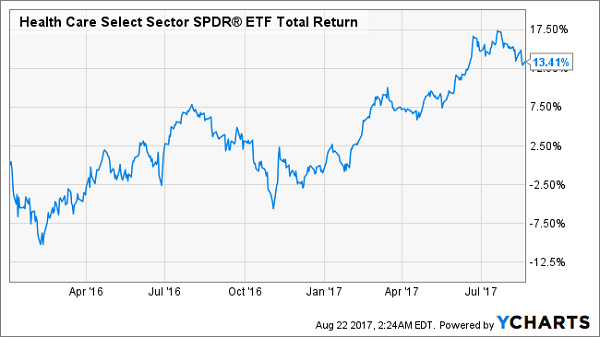 Some of my favorite health care funds, including the top health-care pick in my high-yield CEF Insider service, are up more than 20% for 2017—and they’re nowhere near done soaring! Why? Because the selloff in 2016, like most selloffs, was way overdone.

Utilities: A “Buy All the Time” Sector

Utilities are a slightly different story.

Part of the reason for this is that utilities have been a steady dividend provider for a long time, and their payouts are about as safe as you can find in stocks. XLU’s 3.1% dividend is impressive, and many other utility funds offer dividends of 6% or more—one of my favorites in the space (even though it’s not yet a member of the CEF Insider portfolio), the Cohen & Steers Infrastructure Fund (UTF), offers a 7% yield even though it’s up 19.4% from the start of 2016!

Which brings us to energy. The Energy Select Sector SPDR (XLE) is down 17.3% for 2017 after rising 24.9% in 2016. In other words, what we’re seeing in tech and health care is the opposite of what’s happened with XLE—after a short-term bout of strength, the fund is slumping again amid concerns that OPEC won’t be able to control oil supplies, demand will remain weak and renewables will continue to grow.

Of course, those fears also spiked back in 2015 and the start of 2016, which were stellar times to buy: 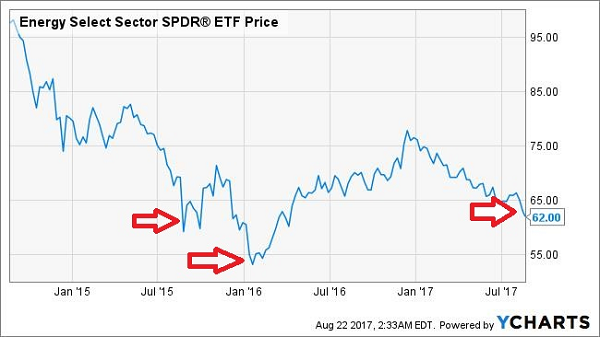 That probably means energy is again approaching a buy time—although the bottom is impossible to predict.

But the odds are good that the market has gotten ahead of itself in overselling energy now, just as it did for health care and tech. And, like with those sectors, buying energy now looks like a canny contrarian move that will reward us with gains and income for years to come.

My Top Pick for September: A “Hidden” 10% Yield

This month, the best bargain is far away from the oil patch. It’s an investment vehicle that few income investors are familiar with (which is why it’s a screaming bargain now).

It’s called a closed-end fund, and it pays a hefty 7.6% dividend yield. But that leaps all the way up to a 10% yield when you count the many special dividends it rolls out frequently. (In fact, this stealth income play has so much extra cash it’s rolled out two of these “specials” in the first 8 months of the year alone)!

I’m going to tell a members of my CEF Insider service all about it in this month’s issue, which comes out tomorrow, August 25, but in order to get all the details, you need to get your name on the list!

CLICK HERE to get this red-hot pick as soon as I release it, plus instant access to 4 MORE funds that pay a stout 7.6% in CASH between them, a guided tour of my complete CEF investing strategy and much more.