The financial media is churning out doom-and-gloom stories 24/7—and that’s keeping many folks on the sidelines when they should be buying.

Sure, you could say that about almost any period in history, but it’s especially true in 2017, when stocks have done this:

A Steady Ride Up 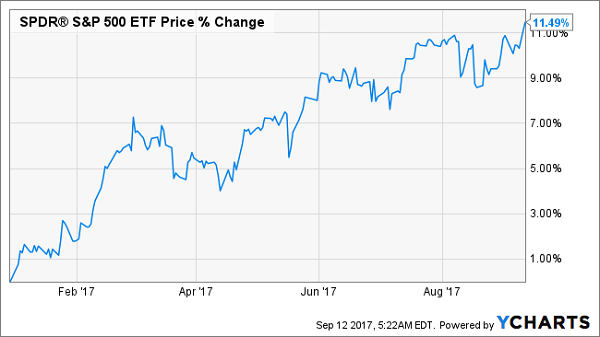 Consider this chart for a moment. This gain came during the Russia scandal, the North Korea nuclear threat and environmental and humanitarian disasters caused by Hurricanes Harvey and Irma.

Can you see any of those events in the chart above?

In reality, stocks aren’t political and they’re not emotional. The truth is, they only go up and down if a major news story also has a major financial impact.

For instance, as I pointed out in my August 24 article on what to buy (and avoid) for the rest of the year, the North Korea threats had pretty much zero financial consequences for US companies, so it’s not surprising that they also had zero impact on US stock prices.

So what actually is behind this bull market, and why is it resisting the political and environmental challenges of 2017?

There are a lot of answers to that question, but let’s stick to three particularly interesting ones that are helping the SPDR S&P 500 (SPY) rise higher—and will benefit not only US stocks but almost all other American assets, from bonds to real estate and beyond.

There’s one thing that drives stocks more than anything else: earnings. At the end of the day, owning stocks is about getting a piece of a firm’s ability to make money by selling its products.

And on that front, American companies are cleaning up—including the 3 blue chip buys I spotlighted back on August 10.

According to newly released data from FactSet, companies are more confident in their future earnings ability, and fewer are cutting earnings per share (EPS) estimates than usual.

At the same time, earnings have been growing by over 7%, on average—and FactSet estimates that earnings growth will rise 6.4% in the third quarter and 11.7% in the fourth quarter of this year, bringing 2017’s earnings growth to 9.3% when all is said and done.

Large-cap companies are also seeing explosive earnings growth. The median GAAP EPS growth rate was 15.5% for the second quarter of 2017.

…and So Are Sales

In the past, corporate management has been criticized for “financial engineering” its way to earnings growth. That is, instead of increasing profits through higher demand for their products, they were leaning too heavily on share buybacks, cost cuts and reporting profits despite weakening consumer demand driving actual sales down.

That was once true, but it’s not true anymore.

Last quarter, 70% of S&P 500 companies exceeded their sales estimates. We also saw them report sales growth for the third quarter in a row—and the rate of revenue growth is increasing. In the first quarter of 2017, sales growth was 3.7% for all S&P 500 firms, and FactSet expects it to rise to 5% for the rest of the year.

What’s driving all this revenue growth? A stronger US consumer is part of the story, but companies are also seeing higher demand from abroad.

Businesses with more exposure to foreign markets reported higher earnings growth in the second quarter of 2017, thanks to higher exports. Earnings rose 10.2% for all S&P 500 companies but spiked 14% for those with less than half their sales in America.

Likewise, companies that are selling to foreign customers are booming. During the second quarter, those with over half of their sales abroad saw 6% revenue growth, versus 5.1% for all S&P 500 companies. 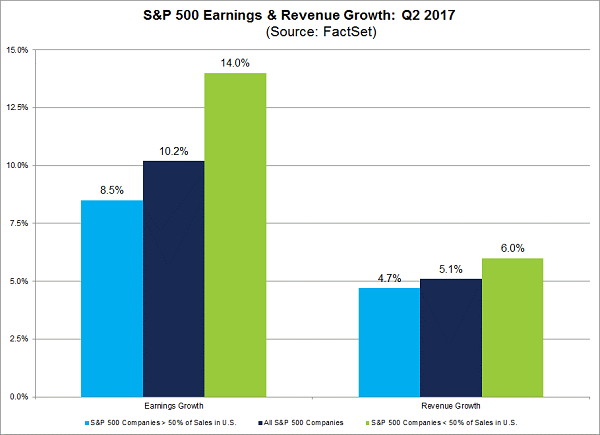 This is one of the untold stories behind the US stock market’s bull run: despite the panic you may be hearing from the pundits, demand for American products is growing around the world, and American shareholders are benefiting.

So the next time you read a story about how a major disaster is about to crush the market, stay calm and remember: companies are making more money, people are buying more stuff, and folks who invest in the US stock market are cashing in.

The Perfect 7.4% Dividend for a Soaring Market

Rising stock prices are terrific, but they do have one negative effect: they drive dividend yields down—and that means a tough slog for folks leaning on their portfolios for income.

Worse, that payout is getting smaller. 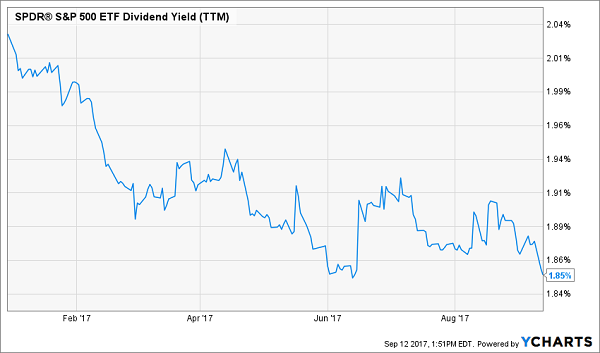 But what if I told you that you can still buy the S&P 500 stocks you know well—household names like Alphabet (GOOGL), Apple (AAPL) and MasterCard (MA)—but with one key difference: you’d be pocketing a fat 7.4% payout?

I know that sounds too good to be true, but I assure you it’s the real deal. And with one quick buy, you can start tapping that massive income stream today.

It’s all thanks to a special kind of investment called a closed end fund. And I’ll reveal the name of this specific CEF to you—along with four other high-yield CEFs also paying SAFE 7%+ dividends, on average, in a new FREE report you can download right here.

Best of all, this incredible fund trades at a ridiculous discount to its true value—but that won’t last long! When that weird markdown slams shut, you’ll be looking at an EASY 20%+ gain to go along with those outsized dividends!

Let’s grab a piece of the action now, before the market comes to its senses on this one. CLICK HERE and I’ll tell you all about this winning fund and my 3 other top high-yield CEF picks.