It’s been a great year for high-yield bonds. If you’ve held them during 2016, congratulations.

But if you’re like me, you’re probably wondering whether to keep holding or take your profits and invest them somewhere else.

That’s the question I’m facing with a high-yield bond fund that has gone up over 22% since my purchase.

To decide what to do, I first want to look at how the asset has performed relative to alternatives. The leading index for this asset class (the Bank of America Merrill Lynch US High Yield B Total Return Index) has risen 17% in 2016:

Meanwhile, the S&P 500 has gone up 13% in the same period, including dividends: 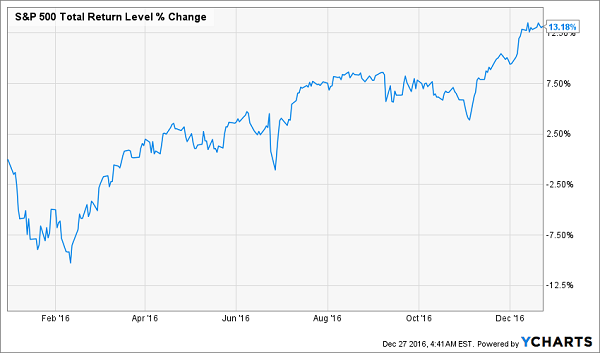 Of course, no one will be crying themselves to sleep at night for getting “only” 13%, but it is less than high-yield bonds paid out.

This is interesting, since these investments were considered toxic at the beginning of 2016.

So toxic, in fact, that we were barraged by articles from mainstream news outlets warning against them. Back in April, CNBC said: “Bad news: Bond defaults are on the rise.” In July, Bloomberg warned that a six-year high in corporate-bond defaults was being driven by problems in the energy industry. This was all after Moody’s said at the end of 2015 that defaults would rise to 3.7% by November 2016.

Of course, they were wrong; defaults were actually 5.6% in November 2016—much higher than the feared level. And corporate bonds went up more than the stock market, even with default rates far above expectations.

Let that sink in for a moment.

Corporate bonds had a higher chance of losing value than the market expected, yet they went up in value at the same time.

The Power of Timing

It’s simple—it goes back to the old Warren Buffett rule: be greedy when others are fearful.

Let’s look at the high-yield bond index for the last two years. When we do that, we see that corporate bonds have only gone up about 5% per year in that span:

This tells us something we already knew: timing is everything, and finding mispriced assets at the right time is the key to outperforming the market.

That’s why I started aggressively buying closed-end funds and REITs back in February 2016, and I told anyone who would listen to buy them, too. One of my favorite purchases was a sizeable position in the Pimco Income Strategy Fund II (PFN), and I’ve held it ever since. That investment has outperformed the S&P 500 by a healthy margin since I bought in: 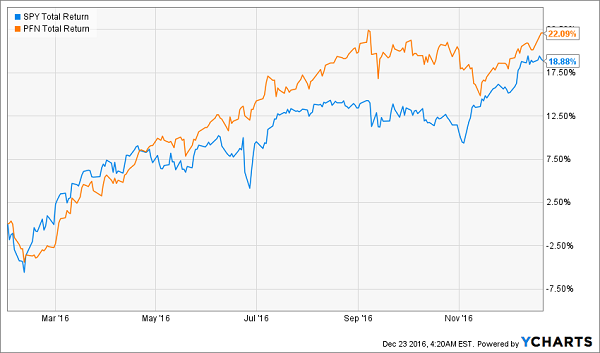 Of course, PFN’s outperformance is partly thanks to the stellar skills of the professionals at Pimco who are managing the fund. And I consider PFN’s 0.83% management fee a fair price to get access to this team’s expertise.

In fact, the managers have exponentially earned their $0.0083-per-dollar fees in 2016. Because year-to-date, PFN has massively outperformed low-cost alternatives. For example, I could have chosen the Vanguard 500 ETF (VOO) or the SPDR Barclays High Yield Bond ETF (JNK) if I were obsessed with saving on fees. Here’s what would have happened: 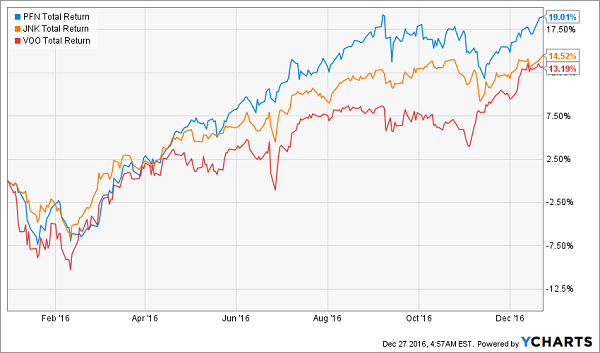 The Power of Taking Control

Sure, JNK’s 0.4% fees and VOO’s 0.05% fees seem attractive when you’re obsessed with lowering costs, but when you choose these assets you’re leaving money on the table.

This is why I don’t like passive investing. I’d rather take control of my money, look closely at what’s happening in the markets and guide my portfolio instead.

There’s also the income issue. JNK’s dividend is 6%, VOO’s is 1.9%, and PFN’s is 10.2%. Plus, PFN’s dividend has been incredibly consistent—an impressive feat considering its high yield: 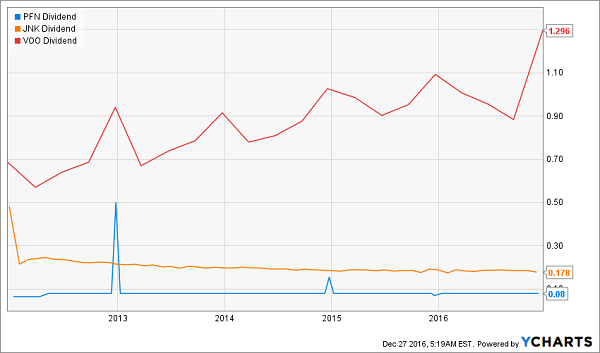 Those who chose the “safer” index option with JNK saw their dividend decline over the last five years. And although VOO’s dividend has gone up, its yield on cost from five years ago is just 3%—or about a third of PFN’s dividend.

Which brings us to 2017, and my decision on whether to keep PFN or not. The fund is currently trading at a 2.9% discount to net asset value—less than half the discount to NAV when I first bought earlier this year. Yet it briefly traded at a premium to NAV in September, which suggests there’s more upside to come.

With that in mind, I’m keeping PFN—and the steady income it offers.

But let’s say I did decide to sell the fund. What would I replace it with? I don’t want to buy another high-yield bond fund, because I won’t be taking advantage of the cyclical nature of asset prices.

I’ll also want to avoid diversified funds that specialize in other high-yield asset classes, like business development companies (BDCs) and master limited partnerships (MLPs). These investments have soared in 2016 after plummeting in recent years, suggesting the time to buy into the bottom has already passed.

But there is one other asset class that has gone virtually ignored in 2016 and could easily be a big winner in 2017: covered calls. These equity-based investments use options to insure stock holdings to the downside; they have returned 21% in 2013 and have only had two negative years in the last decade: 2008 and 2015. In the latter, they fell less than 1% and have risen just 5.4% in 2016.

I’ve dipped my toe into covered calls with a few funds. One of the more interesting is the Nuveen Dow 30 Dynamic Overwrite (DIAX), which effectively buys the Dow Jones Industrial Average and sells call options against it. It’s a cheap fund, too: management fees are just 0.86% of assets.

I chose DIAX because the Dow Jones Industrials had a lower overall price-to-earnings (P/E) ratio than the S&P 500 last summer. This has remained the case, with the Dow around 22 and the S&P more like 26. And, again, I chose DIAX instead of an index product like the SPDR Dow Jones Industrial Average ETF (DIA) because of its potential for outperforming the broader market. And DIAX has done just that, both since the summer and throughout 2016: 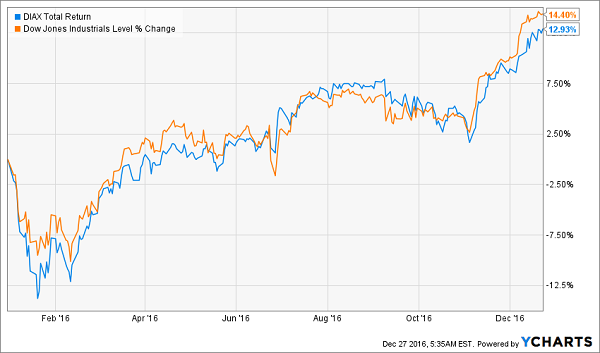 Again, the outperformance exceeds the difference in fees (0.86% versus 0.17%). Partly, this can be explained by the dividend income DIAX provides, but it’s also partly because DIAX trades at a massive discount to the value of its holdings:

DIAX Offers the Dow at a Discount 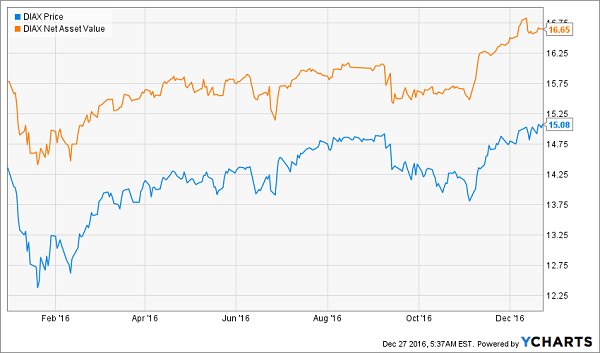 DIAX has sold for less than the value of its holdings since late 2014; the trend has improved slightly lately, but only slightly. I believe this is largely because people are ignoring covered-call funds right now after a negative return in 2015 and massive underperformance compared to all other asset classes in 2016.

Yet DIAX is a rare gem that has outperformed and is still trading at a massive discount.

What does this mean for 2017? Simply put—if covered calls do better and more people notice them, the entire asset class will rise, and DIAX’s outperformance will be rewarded with an improvement to its NAV. That means nearly 10% capital gains upside on top of the 6.8% dividend yield you’ll collect while you’re waiting for it to go up.

As I said above, I see PFN and DIAX as terrific picks for 2017, and I plan to keep holding them. But of course, I also recognize that there are high yielders out there with just as much—and even more—upside.

In fact, I fully expect the 6 other income powerhouses our team just found to be among the group of potential outperformers.

Like DIAX and PFN, all 6 are cheap now. And don’t even get me started on the income potential: when you combine them into a single portfolio, as our team has done, you get a safe—and growing—8.0% dividend yield!

And you can do it by holding just 6 diversified, rock-solid investments. It just doesn’t get any easier than that.

Of course, the more money you have, the better, but the upshot is this: with a modest upfront investment, you can build an income stream that lets you maintain a comfortable lifestyle without having to sell a single stock.

That’s why we’ve dubbed this our “No-Withdrawal” retirement portfolio; thanks to its reliable dividend payouts, you can totally shut out the market’s daily gyrations. Because who cares what stock prices are doing when you know your income is safe?

This is precisely the right way to approach retirement investing. But most index funds don’t pay enough on their own to get you there … no matter how “cheap” their management fees appear to be.

I want to show you a better way. Go right here to get all the details on our brand-new 8.0% “No-Withdrawal” retirement portfolio now.