How to Earn 7% Yields and Fast 25% Upside (contrarians only)

There’s a secret way to make a killing in the stock market, and one superstar investor is jumping in with over $1 billion.

You may not have heard of Boaz Weinstein, but he’s become a legend on Wall Street. Back in 2012, he made a ton of money betting against J.P. Morgan’s London Whale—whose name is now linked with risky, poor investments.

Seeing the London Whale’s ridiculous trading strategies, Weinstein bet aggressively against the Whale—and won big. J.P. Morgan lost $2 billion because of this one trader, causing the bank’s CEO, Jamie Dimon, to admit that the firm had lost the money due to “egregious mistakes” in trading.

Those mistakes were Weinstein’s gain.

Through his firm, Saba Capital Management, Weinstein made big bets against J.P. Morgan’s foolish traders, and this made his investors a lot of money. Since then, Wall Street has come to respect Saba’s ability to bet against the big names and win.

Closed-end funds, or CEFs, are a little-known group of funds that are far less popular than ETFs and mutual funds and are mostly ignored by hedge funds. That’s a mistake, Weinstein says, and now he’s betting big on CEFs because he believes they’re set to explode in value.

My CEF Insider service closely tracks the 500 or so publicly traded CEFs—and they’re soaring. CEF Insider has 5 indices tracking CEFs that invest in different assets, including stocks and bonds, in the US and abroad. Each of these indices is up big for 2017, with 4 of them beating the S&P 500: 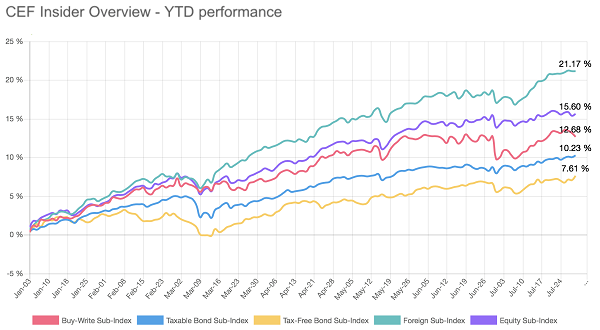 There are tons of diversified CEFs that invest in high-quality stocks and are up 20% or more on a total return basis this year. To give you a taste, I’ve spotlighted four in the table below. (I also showed you some CEFs that invest in other assets, like preferred shares and bonds, in my June 6 article).

The incredible thing about these funds is that they’re surging in value while also paying outsized dividends. This is a key reason why Weinstein loves CEFs. “One of the nicest points about this investment is that while you wait, you earn an above-average yield,” he said in an interview.

Just how good are those dividends? Well, ASG pays an 8.8% yield, while GLU and LGI pay about 5.8% each. Add in EOS’s 7% payout, and you can buy these four funds today and get an average 6.9% income stream.

And that payout is on top of annual capital gains like these: 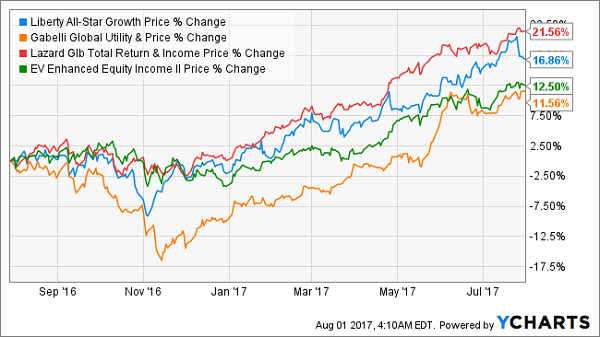 Meanwhile, hedge funds and investment banks are struggling to beat the S&P 500—and most are failing. But with CEFs, we can beat their performance and the broader market while enjoying a nice income stream, to boot.

This is a beautiful story in the investment world. As Weinstein said in a recent interview, CEFs are “a rare corner of the market where retail investors can get an edge over institutions.”

We’re so used to being at a constant disadvantage to Wall Street titans, but CEFs are giving us a rare “in” to beat these folks at their own game. Weinstein’s already figured that out, which is why he’s putting over $1 billion into CEFs. And you can join him. These funds trade on public markets, just like stocks; they’re quite liquid; and they offer big yields.

It’s time for us to close the gap on the big shots, and CEFs are the best way to do it.

Start With My 4 Favorite CEFs Now

To get you started I’ve just released a new FREE report that gives you my 4 favorite CEFs to buy now.

All 4 trade at ridiculous discounts to their net asset values (NAV)—or the true value of their underlying holdings—nicely setting us up for gains of 20% (or more) in the next 12 months alone!

And I haven’t even told you about their yields yet.

At a fat 7.5%, on average, you’ll be paid nicely while you watch their share prices zoom higher. And when you add those rich payouts to the fat capital gains we’ll be banking, you come out with a “real” gain closer to 28% here, with a BIG chunk of that in cash!

It’s all backed up by the incredible past performances these 4 hidden gems have turned in. To be honest, I’ve never seen a fund with a stronger track record than my No. 1 pick.