Let me start with a special shout out to our dedicated readers at Barron’s. Here at Contrarian Outlook, we’ve been drawing up the playbook to retire on dividends for years (Two years ago, we literally wrote the book on the retirement strategy.)

So it was a hoot to see Barron’s run a cover story about retiring on dividends. But I have a bit of constructive criticism about the piece: the dividend stocks highlighted in the feature article had yields too low to actually retire on.

The magazine’s 10 buys included Coca-Cola (KO), International Business Machines (IBM) and Johnson & Johnson (JNJ) and had an average current yield of 4.1% between them (as of the time the piece was written). That means you’d need just under a million bucks to generate a $40,000 income stream in retirement.

Sure, dividend growth will inflate the yield on your original buy, but Barron’s didn’t exactly pick companies that are rolling out accelerating dividends here. IBM, for example, yields a decent 4.8% as I write this, but it raised its quarterly payout by a mere penny a year ago, and its payout growth was slowing even before the pandemic. 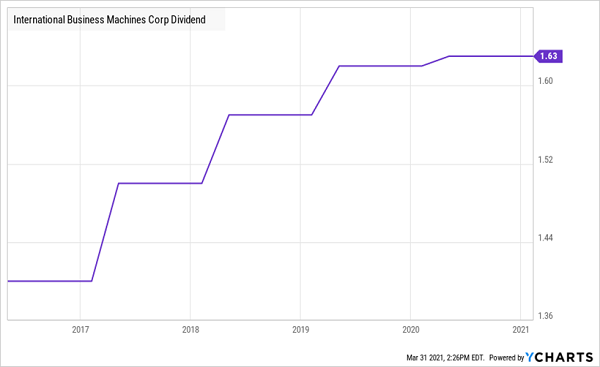 Kellogg Company (K), another pick, yields just 3.7%, and its payout is flatlining, too: 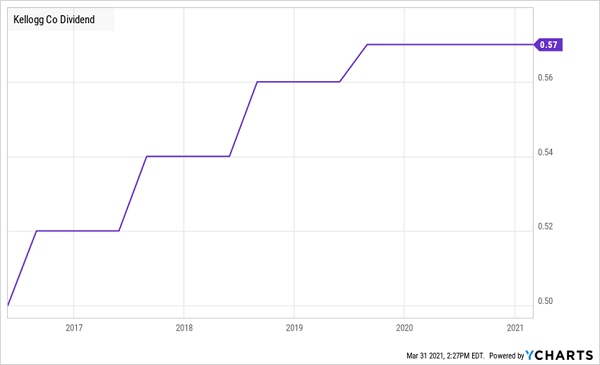 And I’ve written before about AT&T (T), the biggest yielder of the Barron’s 10-pack, which pays a nice 6.9% today but never raises its payout more than a penny a year—and it hasn’t even done that since it last announced a hike, in December 2019: 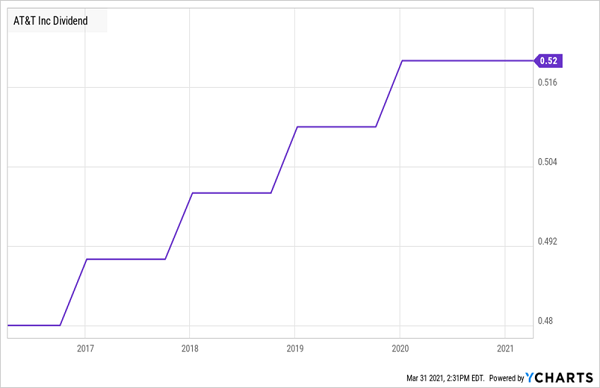 Then there’s looming competition from satellite-TV company DISH Network (DISH), which plans to build its own 5G mobile network, with startup set for the third quarter of this year.

But back to retiring on dividends: I don’t want to be too harsh on my readers at Barron’s. The spirit of the piece was spot-on, and it was well written and argued. And I’m glad to see the press finally talk about an idea we’ve been pushing for years.

I just think we can do a bit better by zeroing in on a group of investments that give us a much higher current yield than the laggards of the S&P 500, thereby letting us realize our dream of retiring on dividends alone.

CEFs Give You Big Yields From Stocks You Know Well

When you’re talking about retiring on dividends alone, the conversation really should include closed-end funds (CEFs). These often-overlooked income plays regularly boast yields of 6%, 7% and even as high as 9%. Payouts like that let you pull in a $40,000 yearly income stream on a lot less than a million bucks.

The best thing about CEFs is that you can often buy one that holds the same picks Barron’s recommends—and you probably hold already. So you don’t have to go barreling off into obscure-asset land to get these outsized yields.

Here are three CEFs that hold companies you’ll recognize. They’re nicely diversified, with top-quality holdings in real-estate, healthcare and technology. Plus they boast a 6.7% average yield, so you’d get your $40,000 income stream on a much more achievable $600,000 nest egg.

Let’s take a quick tour of these three CEFs, so you can clearly see how this asset class fits into a “retire on dividends” strategy.

Real estate investment trusts (REITs) have been on the mat since the March 2020 selloff, but that won’t last. Retail and self-storage REITs should see a pickup in business as the economy reopens, and even if work-from-home is here to stay, office space in urban cores will still be attractive (even if some of it will need to be switched to residential or other uses).

And then there are the REITs whose businesses held strong during the pandemic and are likely to keep rolling. JRS gives us exposure to those, too, through holdings like warehouse REIT Prologis (PLD) and data-center operator Equinix (EQIX).

JRS’s 8% yield is well above the CEF average, and the dividend has proven resilient, with management sustaining it through the March 2020 crash, even though lockdowns were particularly hard on the REIT sector.

With CEFs, a key indicator is the discount to net asset value (NAV), or the difference between the fund’s market price and the per-share value of its holdings. In JRS’s case, we’re looking at a 7.4% discount as I write this.

In other words, we’re buying the fund’s portfolio for just 93 cents on the dollar. That’s a deal, for sure, but we still want to stack it up next to the historical average to see just how sweet a deal it is. 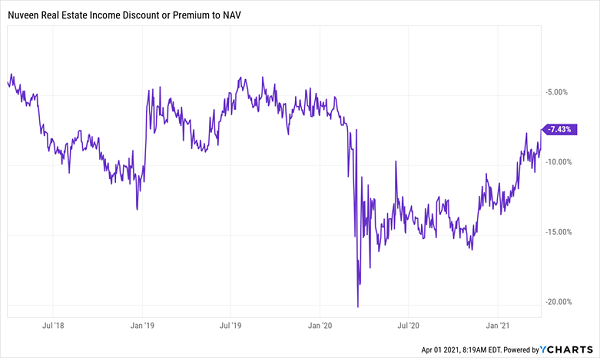 As you can see, JRS isn’t the steal it was a couple months ago, but its discount is still below pre-pandemic levels, so the buy window remains open (for now!).

Plus you’ll get exposure to a range of other big-cap healthcare businesses, too, like medical-equipment makers Thermo-Fisher Scientific (TMO) and Medtronic (MDT), drug maker Merck & Co. (MRK) and stocks once removed from healthcare’s front lines, like insurer UnitedHealth Group (UNH).

The key draw is THQ’s 6.5% dividend, which is rock-solid, having been held steady since the fund’s inception in 2014:

THQ trades at a 3.4% discount, which is narrower than usual. But with the increased demand for healthcare we’ll see post-pandemic—remember the aging-of-America trend? It hasn’t gone away—I expect that discount to flip to a premium.

While you wait, you’ll draw THQ’s solid 6.2% payout, which fits our “retire on dividends” strategy to a T.

Sometimes a premium is actually a discount in disguise, and that’s the case with STK, which trades just above par as I write this, with a 0.4% premium. But as you can see below, premiums are the norm with this fund, and its premium soared as high as 12% just last summer. So paying essentially par for STK is still a good deal: 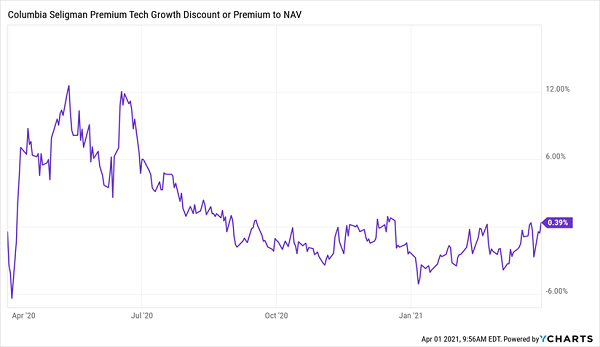 The fund pays a 5.8% dividend as I write this, and STK shareholders aren’t strangers to special dividends, either:

A Steady Dividend, With the Odd “Gift”

Of course, in 2020, “choppy” was an understatement when it came to describing the markets, so it follows that STK has laid a drubbing on the NASDAQ’s already-stellar return over the last 12 months: 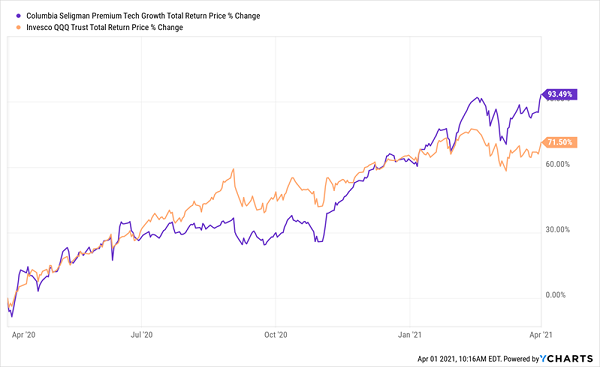 The bottom line? Buying now sets you up for a high, steady dividend and a premium that could get even bigger as 2021 rolls on, pulling STK’s market price up with it.

Bankroll Your Retirement With My 8% Monthly Dividend Portfolio

Despite the attention of Barron’s, the fact is, way too many investors still think a “dividends only” retirement strategy is impossible. And as a result, they’re toiling away in the workforce for far longer than they need to!

This is why I assembled my “8% Monthly Dividend Portfolio.” It goes a step further than the three CEFs I just showed you, giving you a carefully curated collection of investments that yields an outsized 8%, on average, letting you pull in a $40,000-a-year income stream on a $500K portfolio!

And as the name says, it will pay you every month, too—with your dividends perfectly lining up with your bills.

I want to take you on a complete tour of this portfolio and give you details on all the stout income plays you’ll find inside. Click here to read my latest investor report, which tells you everything you need to know: names, tickers, dividend yields (and histories) and more.