If you’re a contrarian investor, you know that the market loves to overreact—and that mass hysteria can hand you some nice profits.

That’s because panicked first-level investors toss great investments over the side along with the bad. We’re happy to step in when they do, buy at a discount, then sit back and watch the price snap back.

This is exactly what Warren Buffett refers to when he says to “buy when there’s blood in the streets.”

And it’s even better if there are high dividend payouts on offer.

Funny thing is, these deals are often hiding in plain sight. In fact, one of the most popular stocks in the world was ridiculously underpriced just under two years ago: Apple (AAPL).

Back in February 2016, Apple’s price-to-earnings ratio fell to a ludicrous 9.9. That’s lower than it was during the financial crisis! In fact, it was the stock’s lowest P/E ratio since the dot-com bubble burst in 2000.

If you bought Apple in February of ’16 and held until today, you would’ve gotten a shocking 90.2% return in less than two years: 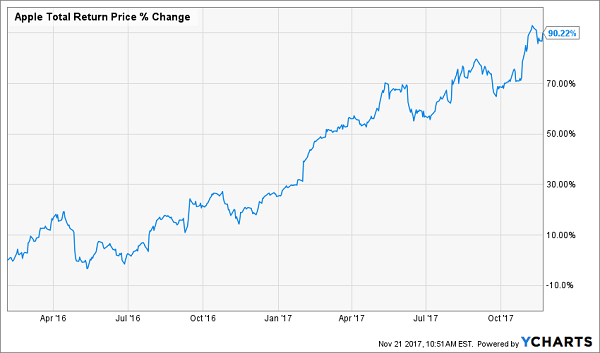 The market foolishly sold off Apple because of worries that the iPhone pipeline was getting stale, users were going to Android, and the Apple Watch was a failure.

How wrong they were.

Now that Apple’s P/E ratio is 18.8, it’s no longer a contrarian bet. But there’s yet another contrarian bet hiding in plain sight—and this time it’s an entire sector.

The entire industry has taken a big beating in 2017, which is why the Energy Select Sector SPDR (XLE) is the only sector ETF that’s down year to date.

Energy Getting No Love 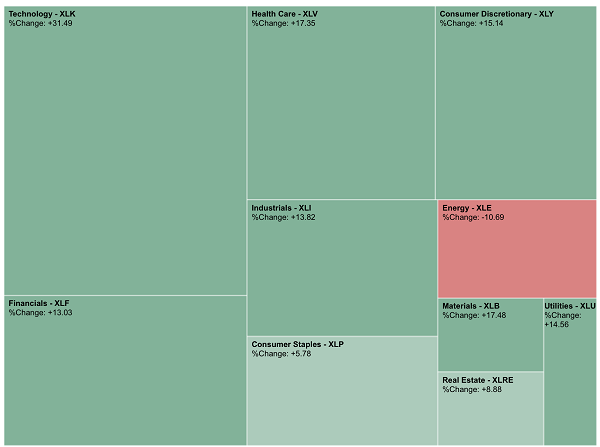 If you’re a real contrarian, now looks like a good time to buy energy stocks.

You can do that with XLE, and if you’re right, you’ll win in 2018. But there are funds that will give you even more upside and higher dividend yields. And you’ll still get the same energy exposure.

I’m talking about closed-end funds (CEFs) with an energy focus. (If you’re unfamiliar with CEFs, here’s a full primer on these high-yield funds, including my 5-point strategy for picking the best ones.)

Because of their unusual structure, many CEFs trade at a discount to their net asset value (NAV), which is basically the market price of all the assets within the fund.

And there are CEFs with even bigger dividend yields and similar discounts. For instance, Cushing also offers the Cushing Renaissance Fund (SZC), which trades at a 9.8% discount to NAV and yields an outsized 9.2%.

That’s not even the highest-yielding energy CEF out there. The Duff & Phelps Select Energy MLP Fund (DSE) offers a shocking 16.8% dividend yield!

Here are 5 funds to consider for a contrarian move into energy, including more details on DSE and SZC:

Here’s something else to consider: SZC has actually had an up year in 2017 (it’s one of the few energy funds to do so), although its actual assets are flat, so this fund really isn’t a contrarian bet: 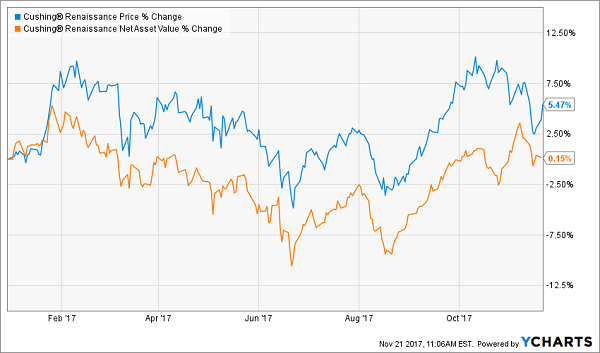 Meanwhile, the rest of the funds we’re considering here have had an abysmal 2017—just as the broader energy market has: 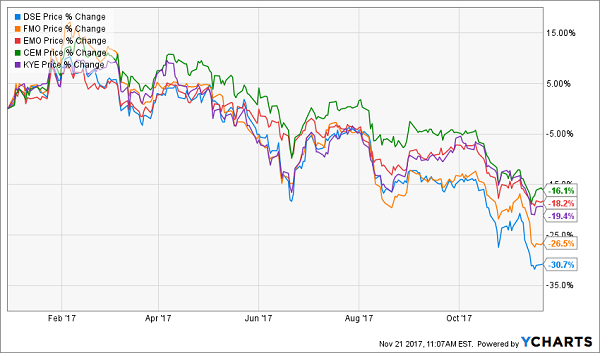 Since the market’s already rewarded SZC, it may be too late to jump into this fund as a contrarian bet on energy. But these other funds have gotten sorely beaten up as investors abandon the energy sector—so if you want to place a bet on oil’s recovery in 2018, these are the funds to do it with.

And don’t forget that your future returns will be heavily reliant on the price of oil. These funds’ long-term performance is closely tied to the black stuff, and that even goes for 2017’s relative star, SZC: 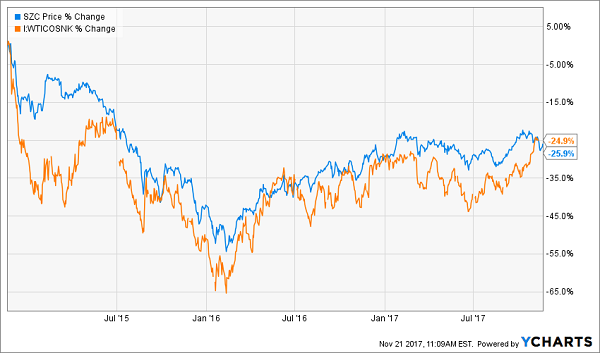 The bottom line? If you think 2018 is going to be oil’s year and you want a big income stream while you wait for the market to realize the commodity’s potential, these are the funds for you.

Revealed: The 4 High-Yield CEFs Every Investor Should Own

Now I’ve got some even better news for you.

It’s about 4 other CEFs that let you to grab yields just as big as those on any energy fund. But there’s one critical difference—you won’t have to stake your nest egg on whipsawing oil prices to get these 4 funds’ massive payouts!

These are nothing less than my 4 very best CEF buys now, and all you have to do is click here and I’ll share my complete research on each one of them with you.

These 4 dynamic funds are retirement catnip: perfect for getting the high income you need in your golden years and the upside to grow your nest egg fast.

But you need to move fast here, as these funds’ weird discounts are already starting to snap shut. Don’t miss your chance. CLICK HERE to uncover these 4 funds’ names, tickers, buy-under prices and my complete CEF investing strategy now.