This 5% Dividend Will Bounce on the Rising-Rate Scare

We’re contrarians first and foremost here at Contrarian Outlook, so when we hear the latest “sure thing” from the mainstream crowd, we get more than a little suspicious.

So it goes with the recent round of selling on the stock markets, which has been driven by the “certainty” that interest rates will skyrocket, and higher rates will crush demand for stocks, especially the tech stocks that have driven the market’s rebound from the March 2020 crash.

Does this view stand up (sneak preview: no)? And what should we contrarians do in response (sneak preview: buy what everyone else is selling—particularly through a group of funds sporting some very impressive dividend yields).

To be sure, we’ve seen a big rise in the 10-year Treasury rate since the start of 2021. And as I write this, the S&P 500 (in orange below) is barely hanging on to its gains for the year, while the tech-heavy NASDAQ (in blue) has gone negative:

Rates Up, Stocks Down? It’s not so Simple 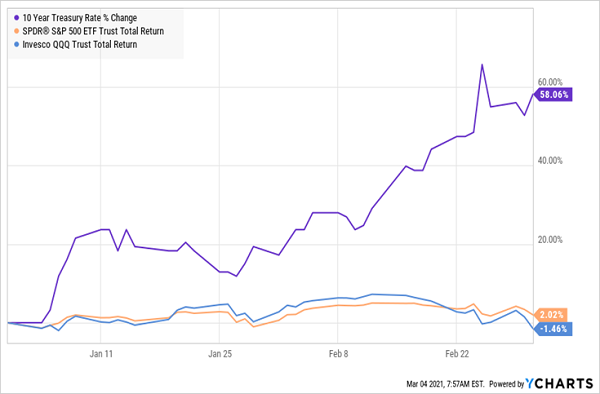 The fear driving rates higher is that inflation will spike because of easy monetary policy at the Federal Reserve and better-than-expected consumer-spending numbers in recent weeks. Higher inflation, in turn, will drive rates up even further.

There is a grain of truth here. Yes, consumer spending has risen a lot, thanks in large part to government stimulus measures. The $1,400 check that’s likely headed to taxpayers soon will probably boost spending further.

But, as is so often the case in investing, if we take a longer-term view, the story changes dramatically. 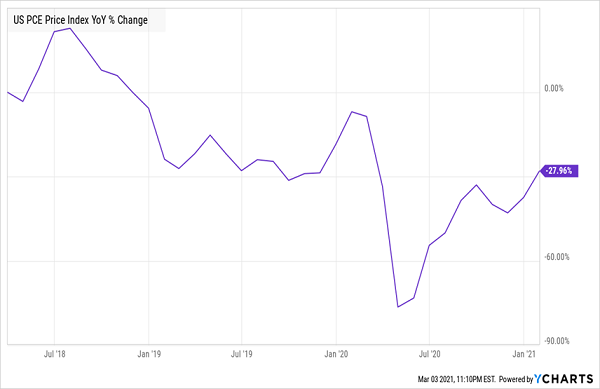 If we look at personal consumption expenditures, which track both how much Americans spend and the rate of inflation (it’s the Federal Reserve’s preferred measure of consumer prices), we see that the rate of price growth isn’t trending upwards—it’s actually slowed in the last three years. That means there isn’t a signal of a huge spike of inflation yet.

… And Interest Rates Are Still Below Pre-Pandemic Levels 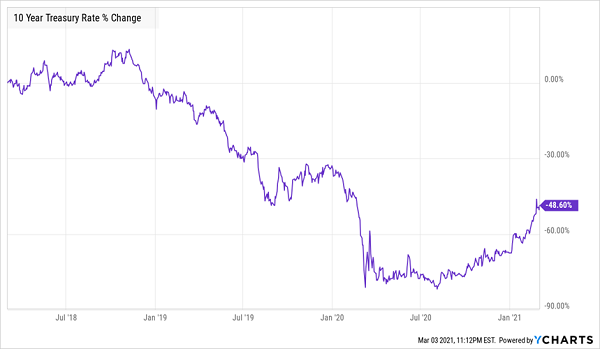 Similarly, we see that interest rates haven’t gone up in the last three years, either. While there has been a spike recently, this just means rates are recovering from the massive dip they saw in 2020, and today’s rates are still below where they were pre-pandemic.

Interest rates will probably rise a bit more as the market prices in vaccine distribution and the easing of social distancing and economic restrictions. But that doesn’t mean a massive spike in interest rates is coming—which also means panic selling is the wrong thing to do.

Tech-Focused CEFs Are One Contrarian Play on Rising Rates

In fact, you’ll do a lot more for your income stream if you take advantage of the tech-stock dip and buy in. Tech-stocks’ dividend payouts run much higher than the 1.48% yield you’ll get out of a Treasury note—especially if you buy into tech through a high-yield closed-end fund (CEF)—and you get sturdy dividend growth, too.

Consider the BlackRock Science and Technology Fund (BST), a CEF that’s hiked its dividend 70% since its IPO in 2017. 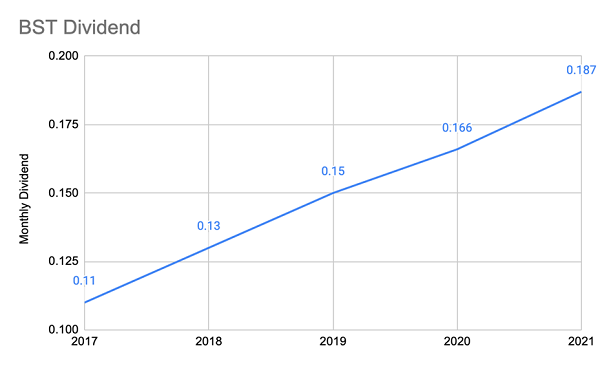 Plus, BST yields 5% today, triple the yield on the 10-year Treasury note, and those who got in at the fund’s IPO are getting a 17% yield on their original buy, thanks to all those payout hikes. While BST has done extremely well since I first spotlighted it in a Contrarian Outlook article in October 2017 (it’s up 361% since then!).

BST’s bigger payout stems from the huge gains it’s booked in its portfolio (which management hands out to us as dividends). BST’s holdings have crushed the NASDAQ, the S&P 500 and the long-term US Treasuries you’d get in a fund like the iShares 20+ Year Treasury Bond ETF (TLT). 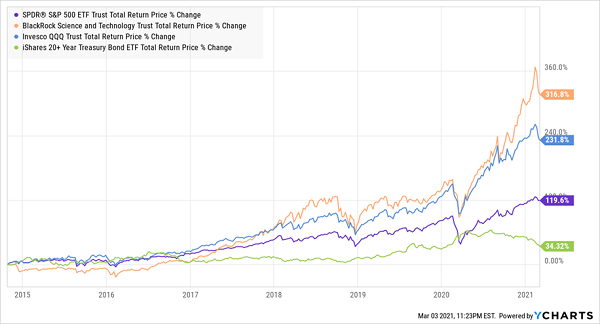 These days, BST’s 3.4% premium makes it a bit pricier than other tech CEFs that hold similar portfolios, so we’re best to put it on our watch list and wait till its premium drops closer to (and ideally below) zero.

But that still leaves us with a question: if tech has done so well, and especially actively managed tech CEFs like BST, why is there all this panic selling because of higher Treasury yields?

It comes down to a concept central to hedge fund-billionaire George Soros’s investment strategy: reflexivity. The idea is that some mainstream investors think higher Treasury yields will cause tech shares to sell off, so other people, mostly market pros, sell first to get ahead of the pack, because that fear of a tech selloff will prompt some investors to actually sell. Then, the pros will swing back and buy in at lower prices in the following days and weeks.

It’s a classic day-trader strategy. And if you sell now, you’ll be the victim of the pros selling ahead of your fears (and buying before you realize your fears were misplaced). This shouldn’t come as a surprise: the same kind of selling ahead of panic selling happens all the time, including during the crash a year ago.

But the stock market came back from a global pandemic that literally ground the planet to a halt, so we can rest assured that it will come back from Treasury yields going up to where they were a year ago.

CEFs really are the hidden gems of the investment world, and their outsized dividends are a lifesaver in uncertain times like these. Consider that the average CEF today yields 7%, nearly five times more than the typical S&P 500 stock.

And the portfolio of 5 “hidden” CEFs I’ll tell you about right here yield even more: an outsized 8% payout between them—enough to hand you a steady $24,000 yearly income stream on just a $300K investment.

Better still, these 5 funds trade at big discounts to net asset value (NAV, or what their underlying portfolios are worth). I expect those deals to translate into serious price gains as those discounts disappear—to the tune of at least 20% per fund in the next year!

I’ll share all the details on these 5 funds—names, tickers, dividend yields, dividend histories and everything else you need to know—right here.