Today I’m going to show you how. I’ll also name an incredible fund that racked up a monster 338% return in the last decade, crushing its “dumb” index-fund alternative by nearly 4 to 1!

Before we get to that, let’s look at how obsessing over fees can cause you to miss out on thousands of dollars—maybe even a million!

First off, we’ll address one area where going for the lowest fees does make sense: with passive index funds. If you have two index funds investing in the exact same thing and one charges 1% fees while the other charges 0.1%, the latter is going to outperform the former. That’s just how the math works out.

But here’s the twist: both of these funds will lose out to top-performing active funds.

Now, I know you’ve probably heard that most active funds don’t beat the index. And that’s true—for stocks. But if you’ve probably diversified into other assets to protect yourself from unpredictable events, like the trade war, which hit stocks far harder than other investments.

So when we start to go beyond the stock market to, say, corporate bonds, junk bonds, preferred stocks and municipal bonds, the script flips. In almost all of those cases, active funds beat passive ones.

Because there’s simply much less attention paid to investments like bonds and preferreds—and that sets up inefficiencies the best fund managers can pounce on.

Those inefficiencies can make a massive difference. In fact, if you stick with the low-fee “wisdom” and avoid top-performing actively managed funds, you could lose out on $1 million in profits—or more—over time.

Let me show you how, using that 338% winner (with the growing 8.6% dividend) I mentioned earlier.

The PIMCO Corporate & Income Opportunity Fund (PTY) is everything you’ve likely been told to avoid: it uses leverage, it uses derivatives, and it charges fees much higher than those of an index fund. In fact, with expenses of 1.35%, many passive investors balk at this “too-expensive” fund.

But remember that fees are automatically taken out of the fund’s portfolio (known as its net asset value, or NAV). With that in mind, here’s an investor’s total return after fees over the last decade: 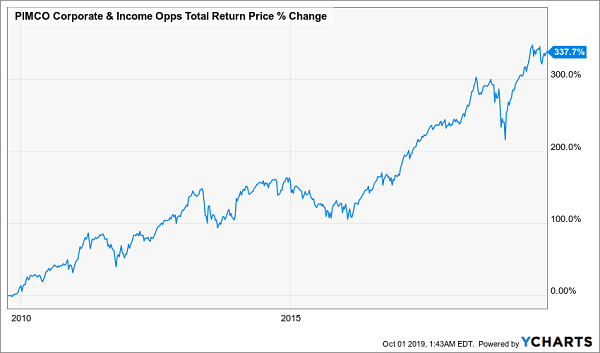 An investor who bought into PTY got a 338% total return in a decade, net of fees. So a $500,000 investment in this fund earned a $1.69 million profit as their initial investment exploded to be worth over $2 million!

The penny-pinching index investor didn’t do so well. 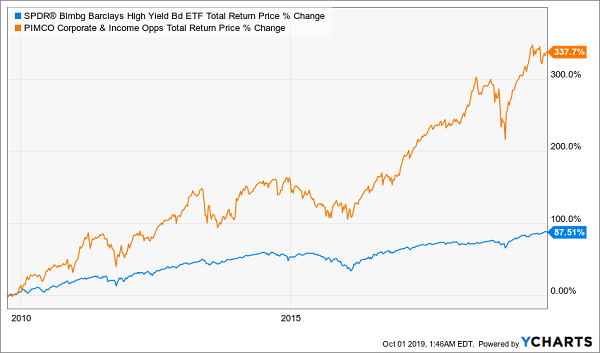 The low-cost passive index fund alternative to PTY would be the SPDR Bloomberg Barclays High Yield Bond ETF (JNK), which invests in the same asset class and charges a meager 0.4% in fees.

Yet “saving” on fees meant that a $500,000 investment in JNK turned into $938,000 in 10 years. In other words, the index investor lost out on over a million dollars by choosing the low-cost index fund.

Now let’s get to the most important part: the amount of this return that came in the form of safe dividend cash. JNK does have a big yield: a whopping 5.6%. So that $500,000 investment returns $2,333 per month in income.

Well, PTY crushes it, with an 8.6% yield. So your $500K means $3,583 per month—more than the average American paycheck. And even though the common “wisdom” tells us a yield like that is unsustainable, the truth is, this payout is very sustainable. 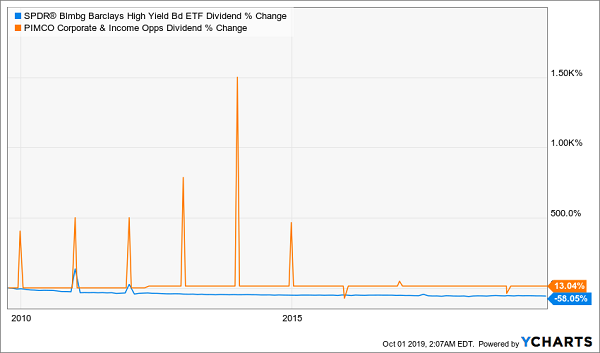 Not only has PTY maintained this big yield for a decade, but it’s actually grown its payout and paid huge special dividends throughout its history.

The “cheap” passive index fund? Its dividend is down over 58% in the last 10 years.

So don’t be fooled by the low-cost index fund myth. While it’s true in some cases that some passive funds will beat the index, it’s not true for all funds in all cases. If you miss that critical point, you could literally lose out on millions.

Here’s something else you may not know: I’m the only analyst in the world who spends 100% of their time studying smaller CEFs (with market caps of $1 billion or less).

Why less than $1 billion?

Because that’s where the biggest bargains live! And I want to give you 5 funds that are far cheaper than PTY—so much so that I expect huge 20% price upside from each of these 5 income plays in the next 12 months.

That’s not all: these bizarrely mispriced funds also pay an outsized 8% dividend, on average, too!

And the longer-term gains on offer here are truly mind-blowing.

Consider Pick No. 1: it pays 9.3% now and has exploded 743% since inception. This retirement “must have” has plenty more upside, too, because it trades at a discount to NAV.

Translation: now is a terrific time to jump in and set ourselves up for another triple-digit win!

The whole “5-pack” of 8%+-yielding CEFs is waiting for you now. Click here and I’ll share the full story: names, tickers, buy-under prices, my unfiltered take on management—everything you need to know!