We need to talk about SPACs, the popular kids of the investment world over the last year, because they could play a bigger role in our portfolios—and even our dividend income—in the future.

Few people associate SPACs (or special purpose acquisition companies) with dividends. That’s because these so-called “blank check” firms are all about growth: they’re set up and pushed through an IPO simply as a pile of money that’s been pooled by investors. Then, post-IPO, their managers purchase an existing private company (with many SPACs focusing on the tech space). By doing so, the newly acquired firm immediately becomes public, since the SPAC is already a public entity.

So you can think of a SPAC as a kind of fast lane from the private to the public realm.

We’ve heard a lot about SPACs in the past year, and for good reason: the sector took off, with 248 SPACs being launched in 2020, up over 300% from 2019, creating a host of strong opportunities for early investors. 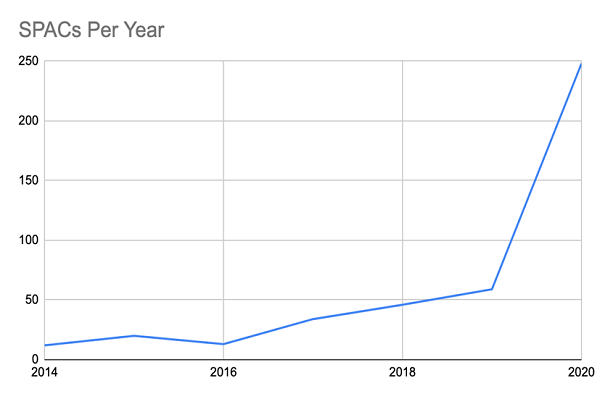 The trick, as with all investments, is separating good SPACs from bad. Some, like Nikola (NKLA), an electric-vehicle startup with a name reminiscent of Tesla (TSLA), flamed out, while others, like Kensington Capital Partners’ SPAC, which acquired EV battery developer Quantumscape (QS), surged, returning 210% in less than a year.

Why the difference? It’s all about expertise: Kensington knew where to go with its SPAC, since it’s a private-equity fund with a lot of expertise in investing in early-stage high-tech firms.

We have seen some slowing in the SPAC market lately, prompting some analysts to say they’re falling out of favor. SPAC Research noted that just 10 SPAC IPOs appeared in April 2021, down from 109 in March (which was the peak so far).

But more than likely, this is a signal of the maturing of the SPAC market rather than a market in decline. The SPAC approach to IPOs just makes sense and has a lot of appeal due to its lower costs and shorter time frames from private to public company. I agree with Mark Yusko of Morgan Creek Capital Management, who recently told CNBC that he thinks SPACs “will become the preferred method for high-growth, innovative companies, or what we call the companies of the future, to go public.”

SPAC Success Is All About Management and Valuation

Of course, buying a SPAC isn’t like buying a well-established blue chip stock. To reap the biggest gains, you have to get in early and not overpay. The other critical factor, of course, is who manages the SPAC, as we saw with the Quantumscape example above.

Trouble is, both the actual value of SPACs (which can trade for quite a bit more than they’re worth on the market, due to pre-merger speculation) and the quality of their management are tough for individual investors to assess. Which is where CEFs come in.

CEFs Get Us Into SPACs With the Help of a Pro

Luckily for SPAC investors, a new, soon-to-be launched closed-end fund (CEF) will help them tap into this market with greater ease and the guidance of an expert. In late March, RiverNorth filed with the SEC to launch a new CEF called the RiverNorth SPAC Focus Fund, which, you guessed it, will focus on SPACs.

RiverNorth has a collection of relatively small CEFs with focused specializations; the RiverNorth/DoubleLine Strategic Opportunity Fund (OPP), for instance, invests in a mix of companies that finance mid-sized businesses and mortgage-backed securities, a kind of derivative on real estate. OPP also yields a very high 11.7%.

Whether RiverNorth’s new SPAC fund will yield as much remains to be seen—and of course, only time will tell if it can choose the right SPACs to post strong gains. But thanks to a diversified portfolio of SPACs and, hopefully, knowledgeable management at the helm, it very well could give individual investors a better chance of winning in this market than they’ve had so far.

You can maximize your portfolio’s safety and boost its income by moving at least part of your investment cash into CEFs today.

Consider that the average CEF yields right around 7% as I write this, and the numbers tell us that going with a selection of well-established CEFs is a safe choice.

Here’s what I mean: according to my latest research, of the 330 CEFs that have been around for a decade or more, only 14 have lost money in the last 10 years.

And of the 14 that did lose money, all but 3 were in the energy sector. Dump those, and CEFs’ win rate jumps to an incredible 99%.

My team and I have scoured the CEF space to bring you our very best picks among these funds—our absolute must-buys as we move through the late stages of the pandemic and into reopening. They yield 7.1%, on average, now and are primed for 20%+ gains in the next 12 months, thanks to their bargain valuations.

Get full details on these 5 perfect-for-2021 dividend buys now. Everything you need to know—names, tickers, buy-under prices, dividend histories and more—is waiting for you right here.