We aren’t falling for this “head fake” oil plunge. Instead we’re buying what I like to call the “Biden barrel discount”— grabbing beaten-down oil stocks with surging dividends!

I’ll drop two tickers primed to ride oil’s next bounce higher in a second. First, though, here’s what I mean by the “Biden barrel discount”: 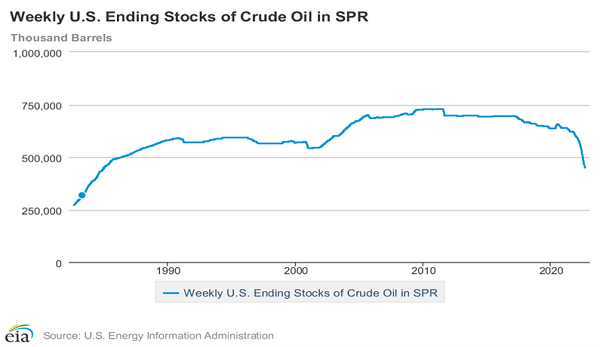 Sure, oil has pulled back on recession worries, but the US has also been releasing crude from its “emergency” supply, the Strategic Petroleum Reserve (SPR). A cool one-hundred million barrels have been released in the past 12 months.

We’ve been buyers of the energy-price dip because:

Crude oil is trading near important support levels, which means there are plenty of buyers of the goo here. Meanwhile the economy continues to muddle through. Oil supply remains tight. Prices per barrel are much more likely to increase by $20 than fall by $10, in my estimation.

And prices will take another jump when the SPR (inevitably) has to be switched off!

Meanwhile, the global trading system is crumbling. Consider Russia, a pariah state whose production has bounced back after its illegal and immoral invasion of Ukraine, largely due to higher sales to its “friends,” India and China:

But that’s about to change, with the EU prepping to ban Russian oil in December, bouncing another 200 million barrels out of the market. And then there’s the Saudis and the market manipulators member states of OPEC, whom you can bet won’t put up with low prices much longer.

President Biden went cap in hand to the Saudis. The joke is that the US used more fuel for Air Force One than it came back with! And don’t get me started on the heights the goo would hit if President Xi, who’s been gazing across the Taiwan Strait for years, takes a page out of Putin’s playbook.

Sure, oil is dirty and produces carbon. But energy stocks are probably the dividend trade of the decade because we’ll need a lot of fossil fuels as we make the transition to renewables. Between now and then, oil companies will make boatloads of money—especially those in stable countries that are friendly to the US.

And because they’re spending a lot less on production increases, plenty of that cash will flow our way as dividends. It already is!

Which brings us to our first pick for this oil-price pullback: mega-cap Chevron (CVX), which yields 3.6% and produces oil in the Gulf of Mexico, off the coast of Australia and Africa and has operations in US and Canadian shale regions. It also has refineries in Thailand, Singapore and the US.

In a rapidly deglobalizing world, we say that Chevron is both “onshored” in the US and “friendshored” in countries that are friendly to America.

Back on August 23, I flagged the stock as a great name to pick up on a September pullback, and this is one you could definitely start building a position in now: the company earned $14.99 a share in the last 12 months, giving it a P/E (price-to-earnings) ratio just over 10. There’s nothing else to say here except that this is a dirt-cheap growth stock.

Quarterly revenue is up 81% year-over-year. EPS (earnings per share) has nearly tripled since last summer, while free cash flow (FCF) has nearly doubled. Yet the stock still yields 3.6% and trades impossibly cheap.

That dividend is up 31% in the last three years, which is not bad, but as you can see below, those payout hikes are starting to pick up steam as Chevron’s capital expenditures level off and FCF rises. 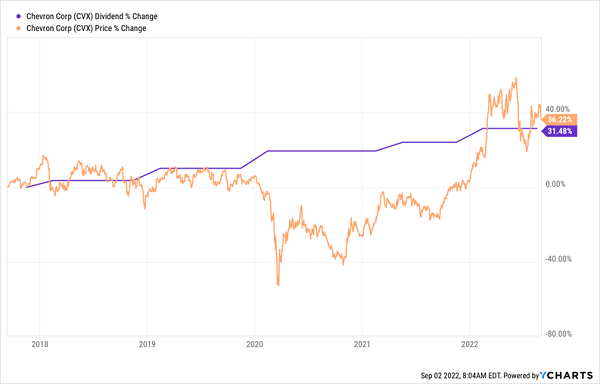 The company is a terrific example of a “Dividend Magnet” in action: as the dividend rises, it pulls the price up with it—a pattern we’ve seen in many dividend-growth stocks. And with the payout occupying just 35% of FCF—a percentage that’s getting smaller as FCF soars—we can expect these dividend-powered gains to continue, especially as the “Biden barrel discount” disappears.

This Canadian Oil Giant Is the Ultimate “Friendshoring” Play

No two countries are tighter than the US and Canada: $2 billion worth trade moves across our northern border every single day.

So as the world splits, we can be sure that Canada, with its treasure trove of oil, gas, lumber and just about every other resource you can think of, will stick with us. So it only makes sense that we own one of our northern neighbo(u)r’s biggest oil and gas producers, 4.3%-yielding Canadian Natural Resources (CNQ).

Like Chevron, CNQ’s core operations are in its home country, complemented by deepwater operations elsewhere, such as the North Sea and off the coast of Africa.

CNQ generates cash faster than it can dish it out to investors: in the second quarter, operating cash flow doubled, to $5.9 billion (all amounts in Canadian dollars). Then management got very generous: CNQ dropped a 28% dividend hike on investors, plus a special dividend of $1.50 a share, paid out on August 28.

CNQ’s shares have pulled back a bit with oil, but this bargain-priced stock is primed for a run: CNQ trades at 6-times forward earnings. That’s cheaper than CVX and absolutely ridiculous for a company that’s gushing cash like CNQ.

That all comes on top of a dividend that’s doubled in just the last three years, pulling the share price higher with it (you can see that hefty 28% hike and the special dividend on the right-hand side of the chart below): 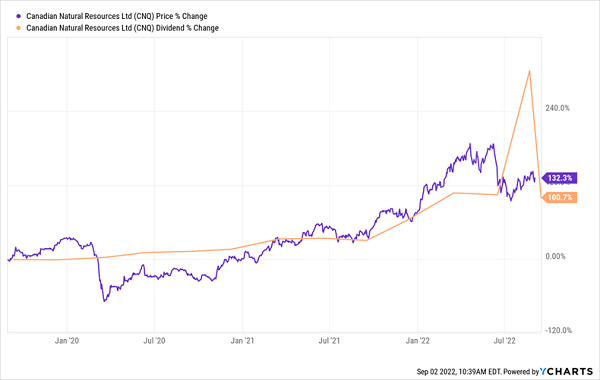 Finally, through the first half of 2022, CNQ executed a $4-billion buyback, helping power its shares higher and offset oil volatility. CNQ’s ultra-safe FCF payout ratio of 21% adds another layer of safety to its already-ironclad payout.

Now I want to give you an exclusive FREE report listing 7 “recession-resistant” stocks I urge you to buy now. They’re a diversified collection of names I expect to double in price every five years while TRIPLING their dividends.

They well on their way to hitting that 3X dividend target. One, for example, is a California-based steel producer that just hiked payouts 27%. Another is a US-based defense stock that raised its dividend 409% in the last decade, driving a 401% jump in the share price! This one is just getting started.

I could go on and on, but I’d rather give you the full story on these 7 stocks now, in your new FREE report.

Click here now to get my full dividend-growth strategy and your copy of this Special Report, which reveals these 7 dividend growers’ names, tickers buy-up-to prices and all of my research on each one.