This Is the Worst Advice You Could Follow Now

When a clock is broken, it’s right twice a day. But when a permabear warns a stock market crash is coming “any day now,” how many times can they be right?

Here are three reasons why the stock market is set to keep going up.

But here’s the thing: analysts were wrong—in the best way possible.

In reality, earnings spiked 14% from the prior year in Q1, the strongest quarterly rate since the Great Recession ended in 2009 (and here are 5 dividend growth stocks we expect to translate their rising profits into fatter payouts for investors).

Because of that 14% bump in profits, the S&P 500’s price-to-earnings ratio remained pretty much flat, despite the index’s price growth: 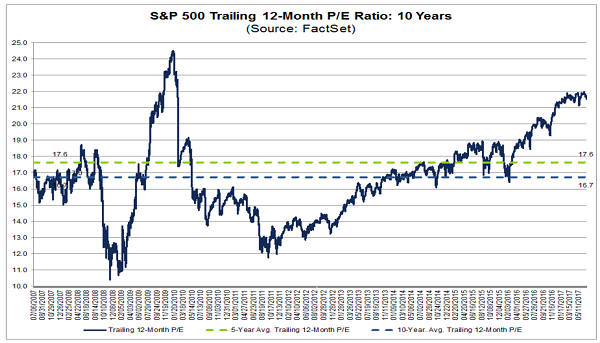 It’s true that the stock market is pricier than it’s ever been, but it’s not getting radically more expensive—and that suggests the market is neither in a bubble nor poised to crash.

2) Earnings Growth Is Getting Stronger

Earnings growth in a single quarter is good—but will it continue?

All signs point to yes.

Analysts expect 6.6% earnings growth in the second quarter, but remember that they were overly pessimistic for Q1, so the actual results could be higher. So far, just a handful of companies have reported results, and they’ve seen 6.5% earnings growth.

But what’s most interesting is the excuses these companies make for having “only” 6.5% earnings growth. Chief among them: the strong US dollar. 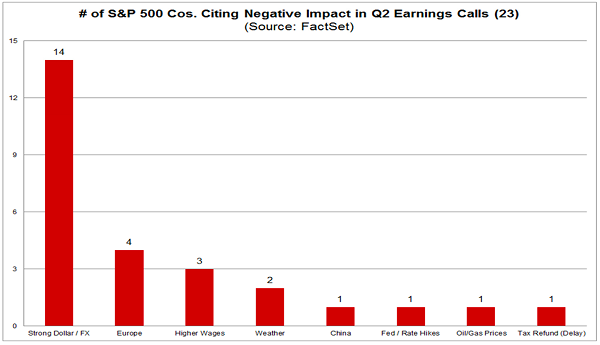 Funny thing is, the dollar has actually been getting weaker, not stronger.

Why does this matter? Well, management is good at making excuses when it comes to the bottom line, and if there’s a big external trend they can point to that can account for their weaker performance, they’ll pounce on it. That’s why we’re hearing a lot about the dollar these days, even though that excuse is looking pretty threadbare.

That strong economy is going to lead to higher earnings for firms nimble enough to pounce. We already saw it in the first quarter, and there’s plenty of reason to think it will accelerate. The Federal Reserve is projecting 2.6% GDP growth for the second quarter, far above the 1.2% we saw in the Q1. This is just a continuation what we’ve seen since the start of 2016, where GDP growth accelerated sharply:

The US Economy: A Steady Upward Climb 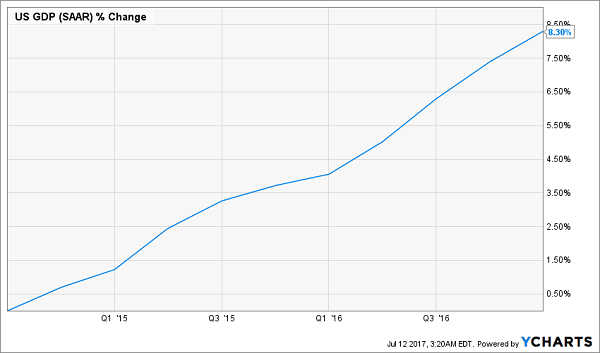 All of this growth will drive more sales to more S&P 500 companies, driving more revenue and more profit opportunities.

What’s driving this improving economy? If you guessed the American consumer, you guessed right.

For decades, US shoppers have been the engine of economic productivity, not only in the United States but around the globe. That hasn’t changed—which is why 2007–09’s calamity was bad for the entire planet, not just the US. But American consumers are finally back on their feet and ready to spend more aggressively.

Want proof? Look at wages. Incomes are rising at a steady pace in the US, but wage gains are spreading beyond the top tier of income earners toward folks with more modest paychecks, who account for the bulk of demand. These workers have been essentially stuck at the same pay rate due to an unchanged minimum wage, while job insecurity has made it all but impossible for them to demand higher wages.

Case in point: the retail sector, where chains are already complaining that higher wages are a serious and growing expense. In its last quarterly earnings call, Bed Bath & Beyond (BBBY) highlighted higher payroll expenses as an added expense because the firm is “chasing wage rates.”

Similarly, Lennar (LEN), Paychex (PAYX) and Costco (COST) have all highlighted higher wage costs as an additional expense. Paychex noted expenses grew 5% due to “higher wages and related expenses due to growth in head count.”

Here’s the thing: for many Americans, the nightmare of 2007–09 is not a distant memory. I know it still has a profound effect on how I save and spend money, and the same goes for many of my friends and relatives. Once-casual spenders who regularly enjoyed retail therapy and lived paycheck to paycheck have pivoted to a dramatically different lifestyle. Even those who have lower incomes now compared to before the crisis still save a much larger portion of their income than they used to.

But slowly, people are getting used to the idea that we won’t see another 2007–09 event anytime soon, and they’re a bit safer in their economic situation than they used to be. We’re only seeing the beginning of that trend. Consumer spending is up a whopping 4.9% year over year, with a lot of that going to discretionary purchases. And that’s good news for the stock market.

So ignore the permabears; this market is doing just fine—and it’s got plenty of room to run yet.

A rising stock market is great, but there’s a problem: those rising share prices are driving dividend yields through the floor.

As I write, the S&P 500 pays a pathetic 1.9%, which isn’t even enough to get you “over the hump” of inflation! So if you’re a dividend hound looking for a place to put your money, it’s a real desert out there.

Here’s the upshot: they let you invest in the same blue chip stocks you love, but with one BIG difference: you’ll collect massive dividends “on the side,” too!

In fact, my 4 favorite CEFs are throwing off fat (and safe) 7.5% average payouts now. PLUS they’re cheap, trading at big discounts to their net asset value (or the value of their underlying holdings).

That means we can bank on easy 20% upside here, on top of that gaudy 7.5% average payout!

And these 4 retirement lifesavers are easy to buy: it’s really just a matter of swapping over the ETFs or regular stocks you already hold.

All you need to do is CLICK RIGHT HERE and I’ll tell you all about these 4 powerhouse funds—including their names, ticker symbols, buy prices and more.