There’s been a mini-wave of insider buying in the BDC (business development company) sector. This is worthy of our attention for three reasons:

So do they also know when their stock is too cheap?

We’ll analyze each case in a moment. First, let’s consider why – contrary to popular belief – certain BDCs may indeed be poised to roll higher alongside interest rates.

Floating-rate income with fixed-rate expenses is a nice combo today, and this “new reality” is reflected in the price action for BDCs. The VanEck Vectors BDC Income ETF (BIZD) has returned 11% over the last six months – a period that included two Fed rate hikes.

Unfortunately many BDCs aren’t desirable “buy and hold” investments because, despite their high dividends, their total returns are lackluster over long periods of time (as payouts get canceled out by price declines).

But – that doesn’t mean we can’t bank double-digit returns with timely buys and sells! As I’ve pointed out before, a simple strategy of buying BDCs when (and only when) they’re trading way below book value produces outsized returns because these firms’ assets are “marked to market” every quarter.

This means book value is a pretty good proxy of liquidation value as the margin of safety already “priced in” to the stock. And today, two companies are trading for just 64% and 80% of their book value. In other words, anyone who buys the stock is getting the assets for just 64 and 80 cents on the dollar respectively.

Plus, these insiders are piling in with their own money. Should we follow?

Let’s start with Leonard. He founded his firm, trading for just 64% of book today, all the way back in 1998. He remains a big shareholder today.

When Leonard is fearful, his investors should be as well. For example, in December he dumped 242,000 shares. Then, this happened:

Dumping Shares Before the Big Drop 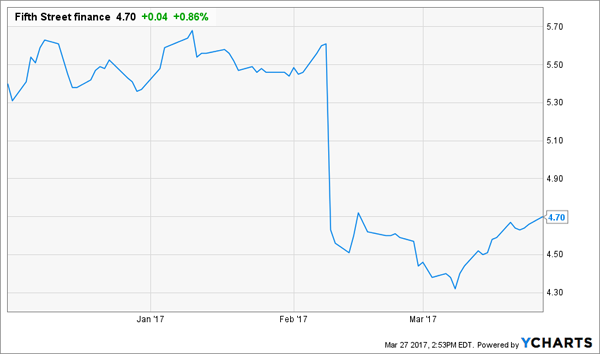 Six weeks later on February 6, Leonard Tannenbaum’s firm – First Street Capital (FSC) – announced a 38% dividend cut. Good thing he got out ahead of his shareholders!

Regular readers know that I’m not a fan of First Street because it never makes its non-management owners any money. The firm’s always-high yield is eventually negated by price losses as time passes. 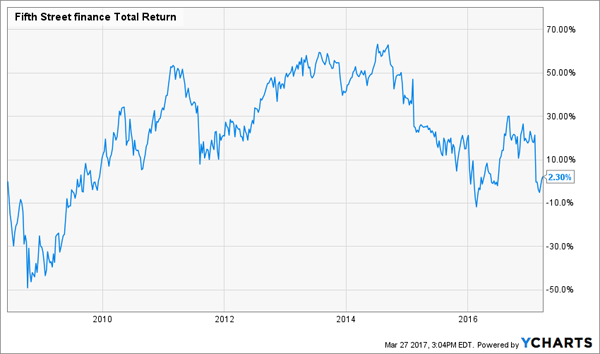 Why the price problems? Seven dividend cuts in the last ten years – for a cumulative 93% payout decline – are always dragging the stock down.

But as you can see in the chart above, there have been “tradable” rallies in FSC every so often. The last time Leonard foresaw one was February 2015, when he bought a million shares. Sadly our hero lost money on that trade, largely due to his firm’s recent dividend cut.

Undeterred, Leonard is increasing his wager. So far in March, he’s purchased three million shares to date. He knows his stock is as cheap as it’s ever been with respect to book:

Selling for 65 Cents on the Dollar 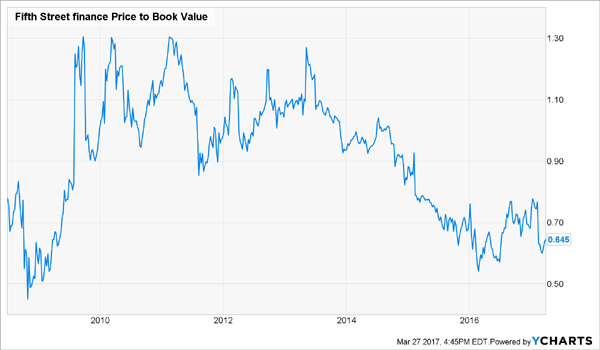 I’ll never formally recommend First Street for my subscribers because it’s not a fit for our sleep-well-at-night “No Withdrawal” Portfolio. But it’s certainly an interesting speculation for the months ahead.

I’ll give these two credit – they’ve been devouring their own dog food lately. And they sure provide financial writers with plenty of material.

Twin brothers Brook and Seth Taube are the co-chiefs at Medley Capital (MCC). In years past they’ve been accused of sabotaging a protein pill maker, duping investors in their previous hedge fund and overhyping Medley’s IPO. Just the types of guys we want to track, because they sure aren’t afraid to sell their own stock when it’s high and buy it back personally when it’s low!

Medley went public at $18 per share and six years later, it trades for just $7.50. When their firm IPO’d, the twins were sellers – hence the previous controversy. But they’ve been furious buyers since last August.

Over the last eight months, the boys have bought more than two million shares each. Their timing has been on point, with Medley returning 9.4% since they began their buying binge: 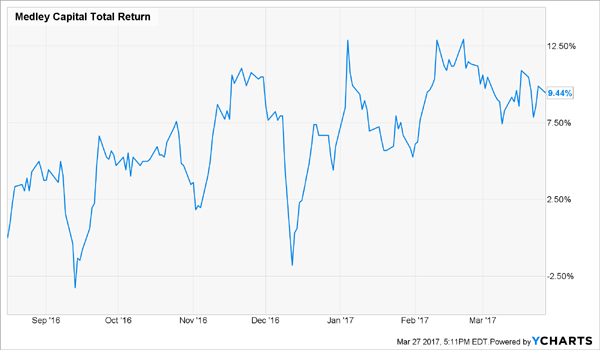 Their stock still trades for just 80% of book value today. As with Leonard, I’m not sure I’d trust these boys with my retirement portfolio forever. But their stock is also an interesting speculation today, if you’re willing to keep an eye on it.

But I’d Rather Invest Alongside These 3 “More Savory” CEOs

While I like insider buying – especially from founders –I love when CEOs who always do the right thing are purchasing more shares for themselves.

And today, three of my favorite CEOs are increasing their personal stakes and buying as much stock as they can get their hands on!

I understand why. All three businesses are recession-proof, and should continue to cruise no matter what’s in Trump’s next Tweet. These companies have captive, growing audiences – and they’ll be able to continue raising the rent without a problem.

And best of all, these stocks pay current yields up to 9%. They are cornerstones of my “no withdrawal” portfolio, which lets retirees and near-retirees generate enough income from dividends that they never have to sell a share of stock.

I’m sure you’ve considered this strategy. Maybe you’re dismayed that it’s impossible to execute with rates near historic lows. After all, with paltry dividends, there’s not enough income to live off.

That’s why a different approach – a contrarian one – is needed today. We must locate yields that are 7% or 8% or higher, and also make sure they’re secure. And what better way to do this than to follow CEOs buying their own out-of-favor, high yielding shares!

I’d love to share the names and tickers of these three insider-loved recession-proof REITs with you. Click here and I’ll explain in my full analysis – and I’ll also outline my entire “no withdrawal” strategy so that you can live off dividends alone.