We can’t take every dividend we see at face value. Especially when we’re talking about 8%, 9% and even 10% yields.

Bull markets, government stimulus, money printing and the scent of all-time highs might give the impression that any stock is safe. Unfortunately that isn’t the case. Even in a bull market, there are dividend traps paying 8% to 10% that’ll sink despite the broader rising tide.

The market might have taken a deep breather earlier this spring, but multiple expansion hardly slept a wink. Thanks to battered earnings, the S&P 500 has only gotten more expensive as the year has rolled on.

This Is the Third-Priciest Market in History

We’re not being rewarded for our risk, either. This year’s broad dividend cuts, combined with higher prices from the recent rally, are resulting in one of the lowest market yields in years.

And Historically, We’re in a Dividend Drought

In this kind of environment, even a fairly priced stock with a so-so yield will get a quick glance from income-starved investors. Downright cheap stocks with high yields will attract income hunters like a moth to a lamp.

But we don’t want cheap stocks. We want bargains.

So, how can we tell the difference?

Consider Ford (F), which for years kept offering increasingly tasty yields, but primarily because its price was in long-term decline.

This Dividend Cut Didn’t Take Everyone By Surprise 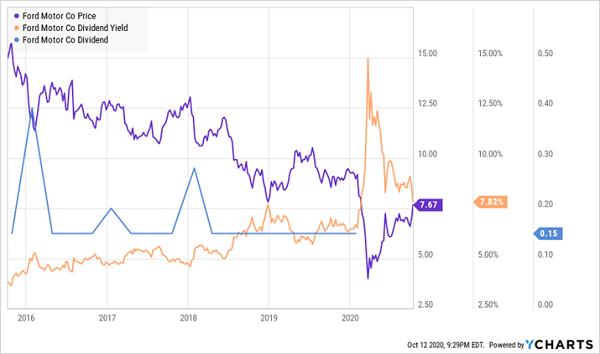 But while Ford traded at perpetually low forward P/E multiples, and while its stock price kept getting cheaper, it never really became a bargain.

That’s because anyone who followed the business kept getting more and more bearish on its prospects. The U.S. passed peak “peak auto” years ago. Automakers have been scrambling to figure out what Millennials want, and determine the right amount of EV demand. Ford all but exited the sedan market in 2018 to focus on higher-margin SUVs and trucks.

Cheap. But not a bargain.

To show you what I mean, I’m going to pick on three losers paying juicy yields of up to 10.5%. We want to avoid those yields, which are likely going to get even higher over time. Then, we’ll discuss some more dependable high-yield dividend payers for you to consider instead.

But at the end of the day, it’s a mall REIT. And in the age of digital commerce, that means a large yield in Macerich should always be viewed with a skeptical eye.

In fact, less than a year ago, I told readers, “This double-digit yield probably won’t last long. It is living quarter-to-quarter as tenants (and the rents they pay this REIT, or real estate investment trust) are being bombarded by free shipping courtesy of Bezos & Co.”

The coronavirus certainly sped up my prediction, but sure enough, months of closures forced Macerich, whose shares are off 73% year-to-date, to hack its dividend from 75 cents per share to a dime for the June payment. (To its credit, it has since raised it by a nickel, to 15 cents, for September.)

But Macerich’s Yield Has Remained High Thanks to Plunging Prices 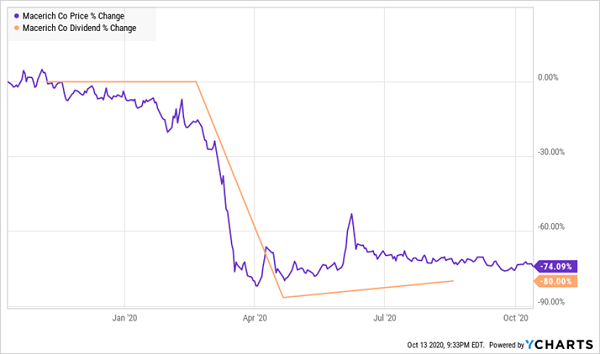 But it’s not a pretty picture from here.

Macerich has a total of $8.7 billion in debt between its own IOUs and joint-venture debt. More troubling is this, from its latest quarterly report:

“Given the continued disruption and uncertainties from COVID-19 and the impact on the capital markets, the Company does not anticipate it will be able to refinance its near-term maturing mortgages.” It goes on to say that it will try to secure short-term extensions of near-term maturing non-recourse mortgage loans on several of its malls, “although there can be no guarantees the Company will be successful in obtaining these extensions.”

In short, Macerich more than has its hands full with debt, and the pandemic is far from over. Sure, the REIT is getting the final three of its 47 malls re-opened. But winter is coming, and Americans, fearing a “second wave” of COVID, are likely to continue the online shopping habits they’ve so quickly adopted.

Prior to COVID, offices weren’t facing an existential threat on the same level as the one e-commerce presented to brick-and-mortar retail. But telecommuting was making inroads. Consider that a survey from flexible workspace provider IWG showed that 74% of respondents called flexible working “the new normal.”

And while many workplaces are trying to bring employees back into the office and will do so with more gusto whenever COVID is brought under control, it’s clear that 1.) telecommuting can work on a large scale, and 2.) employees like it. This has many experts predicting the future of work will include much more flexible schedules with less in-person time, necessitating less office space, and some suggest smaller “satellite offices” could replace large centralized offices in some instances.

This all bodes poorly for the likes of Franklin Street Properties (FSP), which has 32 operating properties and three redevelopment properties in 10 states, mostly in the Midwest and the Southeast.

This Wasn’t a Promising Trend Before COVID 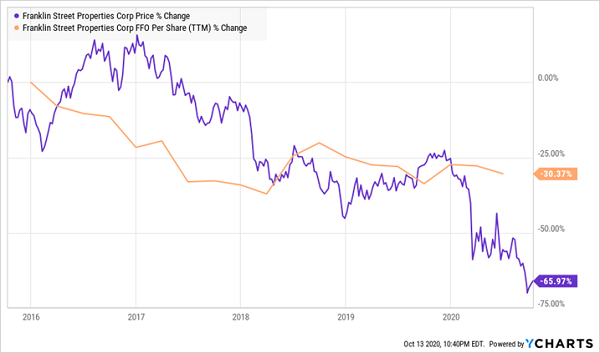 FSP earned $428,000 in net income during the first six months of 2019; in 2020, that flipped to a $3.1 million loss. But remember, Franklin Street is a REIT, so we’re more concerned with funds from operations (FFO) when evaluating its profitability. On that front, $3.3 million in AFFO for the first six months of this year doesn’t look bad… but that’s a third of what it recorded during the same period in 2019.

Franklin Street hasn’t cut its dividend, and in fact recently confirmed another 9-cent quarterly payout due in November. But it’s biting off more than it can chew—AFFO was just 3 cents per share for the first six months of the year. And actually, 2019’s first-half AFFO of 9 cents per share was half of what it paid out in dividends.

That shoddy dividend coverage and a questionable future for its core business are enough reason to leave this 9% dividend be.

Delek US Holdings (DK) is a relatively young downstream energy company that got its start roughly two decades ago. The company boasts refinery operations and retail locations in the South and Southwest.

However, it also has an 80% ownership stake in Delek Logistics Partners LP (DKL), a logistics division that involves gathering, transporting and storing crude oil and refined products. Delek also boasts asphalt technology and materials operations, as well as biodiesel plants.

Delek’s 2020 story is much like other stocks in the energy sector. COVID’s incredible drag on commodity prices squashed its bottom line: The company lost $314.4 million during the first quarter, then $110.5 million in Q2. Shares naturally tanked along the way.

The Bottom Falls Out of Delek 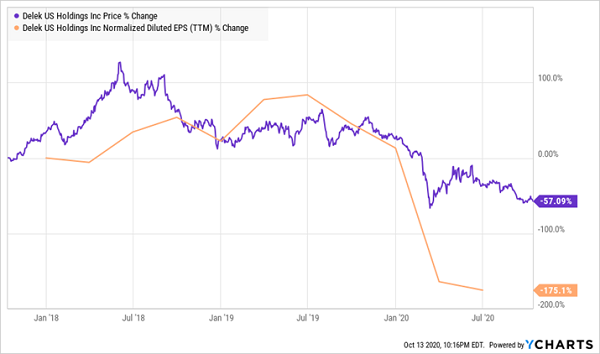 The company also is sitting on long-term debt of $2.4 billion that has grown uninterrupted for years and is more than triple 2015 levels; Delek Logistics is also saddled with roughly another billion dollars in debt.

If there’s a bright point, it’s that Delek hasn’t yet had to cut dividends, though it did cut short a six-quarter streak of payout hikes by maintaining its payout level for June. In normal conditions, Delek’s dividend is easily sustainable.

But these aren’t normal conditions, and the light at the end of the tunnel is merely theoretical. At some point, in the nebulous future, demand might return, when and if there’s a vaccine. In the meanwhile, analysts covering the stock are warning about tight refining margins and even the possibility that Delek will have to close more refineries, leading them to cut already dim estimates.

There are too many uncertainties facing Delek to make the double-digit yield worth it.

I sure don’t. I know you don’t want to, either.