If there’s ever been a perfect time to show you one of my best strategies for getting rich in the market, it’s now.

What can you expect? A simple way to grab an income stream that doubles in short order—and hands you double-digit share price growth, too!

When I say “simple,” I mean it. You’ll barely have to lift a finger. And it works best in selloffs like we’re seeing now.

Along the way, we’ll uncover 3 stocks (including one of the world’s leading semiconductor names) that when combined with this strategy hand us “hidden” dividend yields all the way up to 8.9%!

And you won’t have to take heart-stopping risks to grab those dividends—like putting your nest egg in a basket case like CenturyLink (CTL), whose wobbly 13% payout I warned you about last week.

No way. Instead we’re going to invest in some of the bluest blue chips there are.

How I Stopped Worrying and Learned to Love the Crash

I’ve heard from plenty of readers this past week, wondering if the selloff is truly over and whether now is the time to buy in. Many folks saw the 666-point drop back on February 2 and loaded up on the morning of Monday, February 5 …

… then watched helplessly as the Dow cratered a further 1,175 points—the biggest single-day loss in its history…

Trying to time the market like this isn’t only a recipe for losing money, it’s a great way to drive yourself mad! Which is where my strategy comes in. It’s my favorite way to “time” the market, because it does everything for you.

If that name makes your eyes glaze over, good. Because this strategy is as boring as it sounds. You simply commit to buying a fixed dollar amount of a particular investment on a set schedule.

This “set-it-and-forget-it” approach is one of the best, and safest, ways to buy stocks. That’s because it delivers a steadier climb in the value of your investment than any market timer—or, heaven forbid, Bitcoin speculator—will ever see.

That’s not all, though. Because when you combine dollar-cost averaging with my favorite type of stock—one with an accelerating dividend, you get something truly special.

Which brings me to the first stock I want to show you today, a blue chip tech play that fits perfectly with this strategy: Intel (INTC).

Let’s say that 10 years ago, in January 2009—in the thick of the financial crisis—you paid no heed to the breathless commentary of the day and made one simple commitment: you’d buy a fixed dollar amount of Intel shares on the last trading day of January over the following 10 years.

But thanks to the periodic nature of your purchases, you would have paid 36% less—just $27.50, on average—than someone going all in on INTC today. That’s also a nice 8% discount to the stock’s average price of $29.84 during that time.

So you’ve already gotten a bargain. But it gets better when you add dividends.

Intel’s stock yields 2.8% today—a tidy premium on the 1.9% the average S&P 500 stock pays—but the quarterly payout has more than doubled in the past decade, including a mammoth 10% hike announced in December, thanks to tax reform.

The end result? If you had followed the same dollar-cost averaging plan as our hypothetical investor above, you’d be yielding an incredible 8.9% on the very first Intel buy you made, back in January 2009, today. 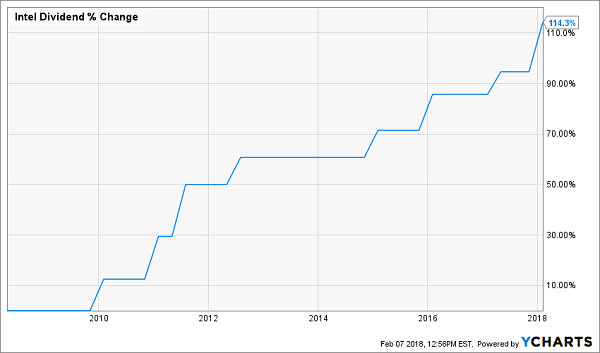 The route to a bigger income stream here is obvious: as you buy more shares, you generate higher dividend payments … which you use to buy still more shares, juicing your dividend stream even further!

Which brings me back to Intel, which is pouring serious cash into R&D, fueling new chips like its Xeon D-2100 processor. The D-2100 is aimed at “edge computing,” where connected machines process data onboard instead of sending it to the cloud, boosting their efficiency. 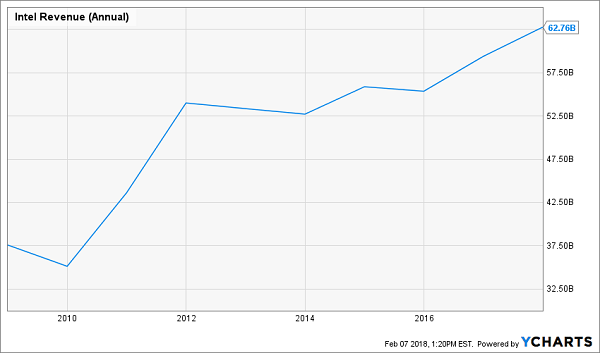 These innovations will boot up the company’s earnings per share (EPS), free cash flow (FCF) and its dividend, giving the share price a nice lift as they do. And the dividend is backed by safe payout ratios: Intel’s dividend accounts for just 40% of EPS and 43% of FCF.

Pfizer (PFE) follows the Intel model to a T: it dropped $7.7 billion into R&D over the last 12 months—a full 15% of revenue—and that’s driving new drug releases at a rapid clip: in 2017, Pfizer bagged 10 FDA approvals, more than any other year in the past decade.

That, along with tax reform, has put a spring in management’s step: it’s now forecasting 4% revenue growth this year, along with adjusted EPS of $2.90 to $3, the midpoint of which would be up 11% from 2017.

Pfizer gives you more dividend punch than Intel up front, too, thanks to its 4.0% yield, and you’re not sacrificing much payout growth to get it: the dividend has marched 41% higher in the last 5 years and it’s reliable, at a moderate 57% of FCF and 27% of EPS.

Something else to watch for? An acquisition. Pfizer is in the process of selling its consumer products unit and says it will repatriate $20 billion from abroad, again thanks to tax reform.

The best part is that the correction has given us a chance to buy cheap: PFE trades at 11.4 times forward earnings.

A Growing Dividend From the “Experience Economy”

Vail Resorts (MTN): If there’s one stock that benefits from both millennials—and their lust for “experiences” over “stuff”—and well-heeled retirees, it’s this one.

(Note: I flagged Vail as a stock about to deliver a big dividend hike a few days ago; today we’re going to take a deeper dive into the company.)

Vail owns some of the main places skiers and snowboarders go to play. Besides Vail, they include Breckenridge, Beaver Creek and Canada’s Whistler-Blackcomb, site of the 2010 Olympics and the most visited ski resort in North America, with more than 2 million visits a year. 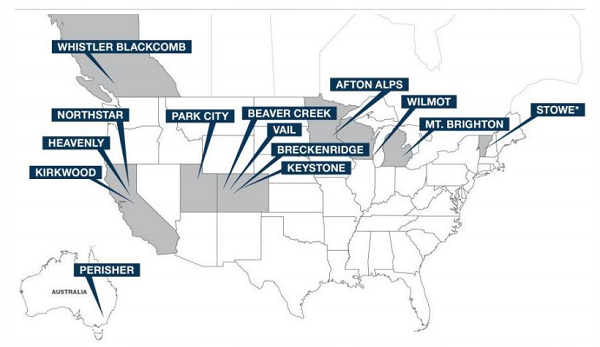 There’s more growth ahead. Even though this ski season got off to a slow start in the western US, the company reports an improvement in January. But either way, Vail is pocketing rising revenue from its season passes, including its Epic pass, a one-buy way to get into 46 different resorts across the globe.

The best part? Vail has a terrific record of shoveling cash out to investors: the shares yield 2%, but its payout is surging: last March, Vail dumped a 30% dividend hike on shareholders, following a similar 30% increase the year before.

The first-level crowd might point to the high payout ratio (dividends occupied 65% of the last twelve months of earnings). But you’re far better off looking at dividends as a percentage FCF. On that basis, the ratio drops to just 38.6%, so Vail has room to deliver another double-digit hike this March.

I’ve seen it time and again: investors chasing massive current yields that are simply too good to be true … only to get burned when these “traps” spring, crushing their income stream and sending the stock price over a cliff, taking their hard-earned cash with it.

It’s the income-investing equivalent to market timing. And it will drive you just as crazy (and do even bigger damage to your hard-earned nest egg)!

That’s why I recommend “stair stepping” your way to a fat payout, just like our lucky Intel investors did.

I’ve uncovered 7 more stocks that are ready to deliver the explosive dividend hikes you need to get there fast. Each and every one is delivering steady payouts that dwarf anything your average blue chip dribbles out—and thanks to the crash, they’re terrific bargains now.

So what are we looking at here, in dollars and cents?

Easy: 7 quick buys to DOUBLE your money every 6 years while TRIPLING your retirement income stream.

And if you’re worried about risk, we’ve got some nice downside insurance here, thanks to these 7 stocks’ bargain valuations.

I’m ready to reveal these 7 perfect selloff bargains to you now. Simply CLICK HERE to get everything you need to know: names, ticker symbols, buy-under prices … the works!