For income investors, today is that point.

And I’m going to show how to take maximum advantage with 3 unloved stocks in a beaten-down sector poised to rally with the next interest-rate hike. Sir John would almost certainly “back up the truck” for these 3 incredible bargains today.

More on them in a moment. First, here’s a quick recap of why dividend-seekers are so down-in-the-mouth these days.

For one, payout growth is slowing. According to FactSet, dividends per share grew 7.5% year-over-year in the 12 months ended in the first quarter; that will likely slide again, to 4.9%, in the next 12.

Meantime, the gap between the valuations of the S&P 500’s “safest” sectors and the profits supporting them is frighteningly wide: consumer-staples stocks, for example, trade at 22-times annual earnings. That’s 25% higher than their 10-year average!

And so far, September is living up to its reputation as the worst month for stocks, with the S&P 500 whipsawing on speculation the Fed will hike rates at its meeting this week.

If Sir John were around today, what would he do?

Easy. He’d go bargain hunting in beaten-down sectors that actually profit when rates head higher, like the one I’ll name below.

First, here are two overhyped dividend stocks you need to avoid—or dump if you own them. They’ve already fallen harder than the S&P 500 in September—and I think their shareholders’ pain is just beginning.

Campbell Soup (CPB): As I wrote in August, consumer-staples companies like Campbell are on the wrong side of a massive shift: consumers’ growing appetite for fresh, rather than packaged, fare—and their willingness to pay up for it.

Campbell’s response? Throw money at the problem. In 2012, it paid a ridiculous 20-times earnings for carrot-and-beverage maker Bolthouse Farms, then “bolted on” smaller producers Plum Organics in 2013 and Garden Fresh last year.

But when it comes to big-name food stocks, you just can’t teach an old dog new tricks. The fresh-food division’s sales nosedived 12% in the quarter ended July 31, while Campbell’s core business continues to go cold.

Earnings also missed estimates, and there’s not much in Campbell’s payout history to tempt income investors: the stock yields 2.5%, and apart from a special dividend in 2012, the payout’s essentially gone nowhere in the past five years: 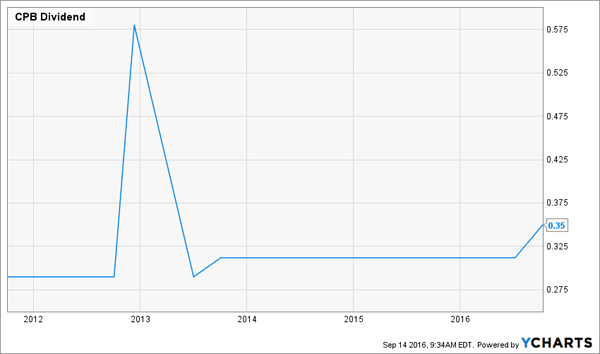 Campbell shares have fallen since the latest results were released on September 1, but they still sport a price-to-earnings (P/E) ratio of 30.9, well above their five-year average of 21.3, suggesting more indigestion ahead.

International Business Machines (IBM) is in many ways the opposite of Campbell: it’s a cheap stock, with a P/E ratio of 12.7; has a higher dividend yield (3.6%); and faster dividend growth.

But in this case, Buffett should have taken the advice he often gives novice investors and bought an index fund like the SPDR S&P 500 ETF (SPY) instead: in the past five years, IBM investors have eked out just a 4.4% total return, while holders of SPY saw their investment nearly double: 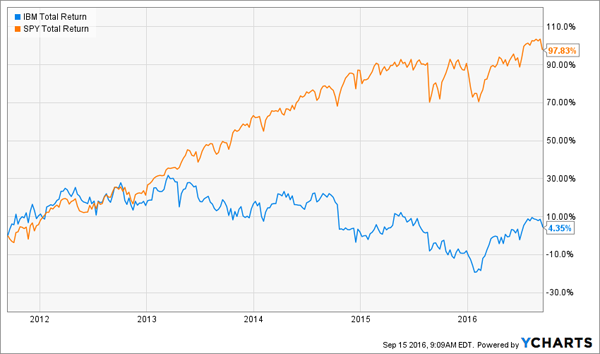 And don’t expect the stock’s higher dividend yield and low P/E ratio to give you much downside protection. Last October, IBM fell 6% in one day after cutting its full-year guidance. It’s set itself another high bar this year, so history could easily repeat.

…And 3 Banks Templeton Would Love

Which brings me back to the screaming bargains I mentioned earlier. All three are in one of the most unloved corners of the market right now: banking.

Most banks have outperformed this month, because rising rates drive up their loan income. Even so, they’ve mostly marched in place in 2016, as measured by the performance of the iShares US Financials ETF (IYF): 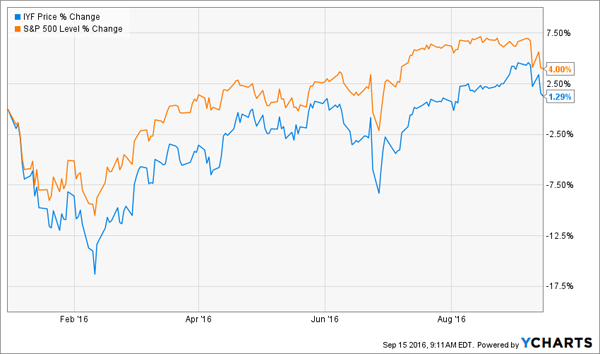 That means it’s not too late to get in; here are three names that should be high on your list:

JPMorgan Chase & Co. (JPM) surprised investors with two figures when it reported second-quarter earnings: one good and one bad (which was actually good news in disguise).

The first number: 16%, which was the jump in Morgan’s loan volumes year-over-year. That’s more than enough to ward off low rates and bodes well for the bank’s ability to keep loaning out cash at a fast clip when rates do rise.

The other? 50%, which is how much more money Morgan set aside to cover bad loans when compared to last year, largely because oil and gas companies are having a tough time paying the bills. But loan-loss provisions actually fell 23% from the previous quarter, suggesting the worst is behind Morgan on the energy file.

Despite these numbers (and far better than expected Q2 earnings) Morgan still trades around book value, or what it would be worth if it were broken up and sold. That’s ridiculous for a bank that’s nearly doubled its payout in five years and has grown its profits despite the Fed’s zero-interest-rate policy.

Add rising rates and you get a virtuous cycle: higher profits that fuel bigger dividend hikes and more buybacks. Repurchases, in turn, juice dividend hikes further because they leave Morgan with fewer shares on which to pay out. 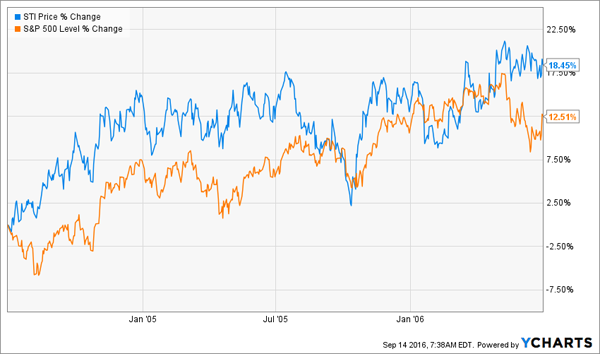 You don’t even have to go back that far. From mid-September of last year till year-end, when we were facing the same situation as today (the likelihood of one rate hike by year-end), STI also clobbered the S&P 500: 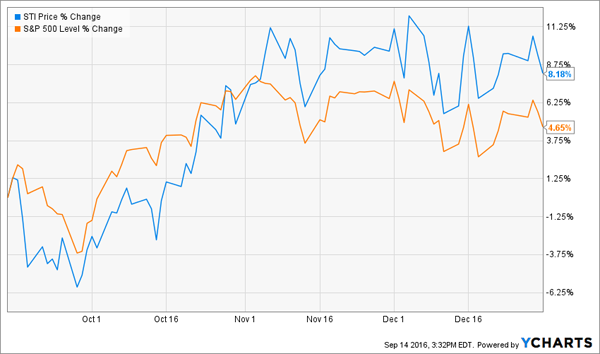 Today, the stock trades at just 93% of book value, but management is working to narrow that discount. The firm raised its payout 160% over the past three years while repurchasing 8% of its shares outstanding.

Those moves helped power the stock to a 30% gain in that time, and there’s more to come, with analysts calling for more profit growth in 2017.

Either way, higher dividends are a lock: STI pays out just 28% of its earnings as dividends, so it has lots of room to keep lining shareholders’ pockets, even if the Fed gets cold feet on further rate hikes.

TD Bank (TD): Looking to pick up some easy international exposure? Look to Canada, home to TD, a 3.9% payer that recently upped its dividend by 6% (in Canadian funds). As with SunTrust, there’s lots of room for more due to its low 45% payout ratio.

TD stands out among our northern neighbor’s banks for its US business (it has more branches here than in Canada). In the latest quarter, this division’s net income jumped 21% year-over-year, fueling a 6% rise in the bank’s earnings per share.

Management has a firm hand on the loan portfolio, too: loan-loss provisions were C$556 million, down from C$584 million in the previous quarter. That’s despite the fact that energy companies represent a far bigger slice of the Canadian economy than ours.

The kicker? The stock trades at 12.8-times its last 12 months of earnings, matching up nicely with its American cousins. It also trades on the NYSE, so it’s easy to buy.

How to Retire on Dividend Income Alone

Banks like TD, SunTrust and JPMorgan are great buys now, but even with their strong dividend growth, it will still be many years before a purchase today would match the 8.0% current yields offered by 3 other overlooked investments I just uncovered.

And even if all 3 banks rally hard on an interest rate hike (or two), they’ll still have a tough time matching the 10% to 20% gains my 3 favorite high-yielders are set to rack up in the next 12 months.

These 3 investments are so solid, I’ve made them the cornerstone of my “No Withdrawal” retirement portfolio. Just as the name says, this broad-based collection of investments lets you hang it up and live on dividend income alone … without ever having to tap your capital.

Imagine what that could mean for your retirement. And if you’ve ever wondered how you’re going to leave a meaningful legacy for your children (or grandchildren), say, this is the plan for you.

I can’t wait to show you the ins and outs of this revolutionary strategy. Simply click here to get access to my full “No-Withdrawal” portfolio—including these 3 incredible income plays—now.