A few months back, I advised you to stick to your guns and avoid the temptation to “sell in May and go away.”

I hope you followed that advice, because it looks like investors who were duped by this tired old slogan are going to miss out on gains. Here’s how the SPDR S&P 500 ETF (SPY) has performed since May 1: 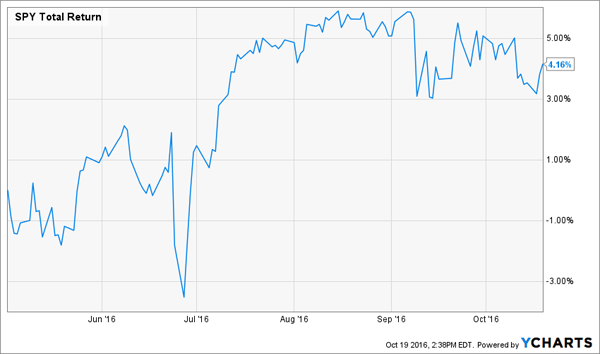 Now the herd is wringing its hands over the presidential election, worried that the fallout from the circus-like race will trigger a lasting market downturn.

But recent history says they’re off base here, too. Because once the vote is over, markets typically gain ground in the first year of a new presidential term. 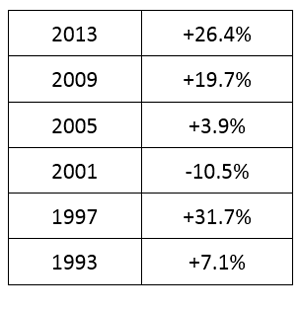 But as I told you last week, if your timeframe is 10 years or longer, as most people’s are, you can turn off CNBC now … because you don’t have to worry about any of this anyway.

So don’t listen to the naysayers—it’s still a great time to buy. The key, as always, is to seek out undervalued stocks in ignored corners of the market.

And don’t forget about dividends, because, as many studies have shown, dividend payers—and better yet dividend growers—outperform non-dividend-paying stocks over time.

Today, I’m going to give you three “sweet spots” in today’s market, along with three dividend growers I see exploding for 30% gains in the next 12 months.

An Insurer in the Bargain Bin

When done right, insurance is a cash machine. But unfortunately, Warren Buffett’s favorite business has fallen out of favor, with low interest rates to blame.

That’s because insurers typically invest their floats (or the premiums they collect) in safe, interest-bearing securities—and low rates mean low investment returns. But times like these are great for buying strong businesses for the long haul, and there are few better examples right now than 141-year-old Prudential Financial (PRU).

Right now, PRU trades at a ridiculously low 67% of book value (or what it would be worth if it were broken up and sold off today) and 8.6-times earnings. 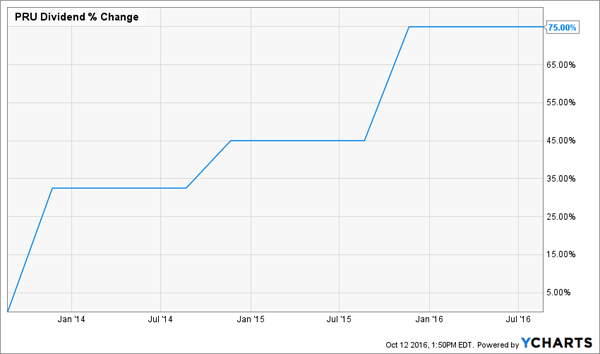 The company is still atoning, in investors’ eyes, for its 2013 dividend cut. But it’s working hard to win them back, hiking its payout 75% in the past three years.

There are more big hikes ahead, with the next one being announced as early as next month, if PRU sticks to its usual schedule. That’s because the company pays out just 27.2% of its earnings—and a miniscule 5.1% of its mammoth FCF—to investors today.

A rate hike in December—a near certainty at this point—should put a nice lift under the shares, too.

Discover Financial Services (DFS) is another financial stock that’s been ignored by the masses. It now trades at a similarly ludicrous 10.5 times earnings and 6.1-times FCF.

That’s below browbeaten Wells Fargo (WFC) and American Express (AXP), the latter of which has taken more than its share of lumps in the last couple years, including being dumped as the official card partner of Costco Wholesale (COST).

Meantime, Discover quietly ticks along, knocking its delinquency rate down to 1.51% as of September 30 from 1.67% on December 31. That’s way below the industry average of 2.13%, and, like Prudential, DFS is a direct beneficiary of a December rate hike.

The kicker? Buying now locks in a 2.2% dividend yield, which doesn’t sound terribly exciting until you account for the payout’s growth, which has clocked in at 200% over the past five years. In other words, if you’d bought as recently as 2011, you’d already be yielding 5.0% on your initial buy! 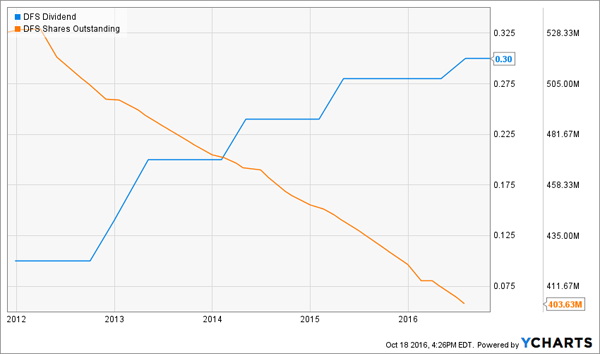 You don’t have to tell management the stock’s undervalued—it’s been busy buying back shares at the same time, slashing the number outstanding by a sky-high 23.9%. That works like a magnifying glass on the dividend, because it leaves fewer shares for Discover to pay out on.

The bottom line? Discover is one of the best-run companies in a sector investors are putting way too little faith in. It’s slated to report earnings after the market closes on Tuesday … and the time to buy it is now.

The Next Dividend Aristocrat

Industrial stocks aren’t trading at insurance-company multiples these days, but many have pulled back after bellwether Honeywell International (HON) cut its full-year earnings guidance a couple weeks ago.

And as I wrote on October 10, the sector is home to plenty of underappreciated dividend growers. One of the strongest: Roper Technologies (ROP).

The company will be the next to join the S&P 500 Dividend Aristocrats, or the companies that have raised their payouts for 25 straight years, likely in January.

Unlike some of the other Aristocrats—I’m looking at you, Procter & Gamble (PG) and AT&T (T)—these aren’t pathetic $0.01-a-year increases. Roper’s last hike clocked in at 20%! And with just 13.2% of its earnings going out the door as dividends, another big increase after Christmas looks like a slam-dunk.

Buying Roper ahead of a dividend hike has been a great strategy since 2009. Take a look at the tight relationship between the company’s payout and its share price: 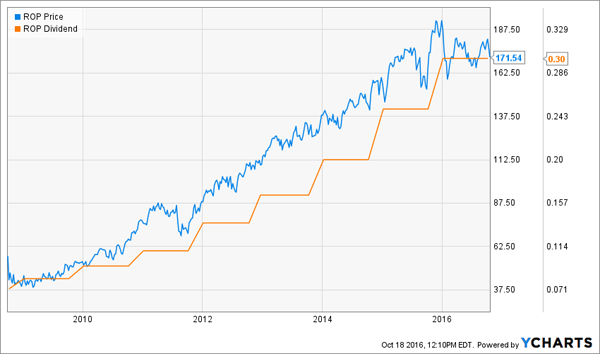 But energy is Roper’s smallest division, chipping in just 16% of its revenue in 2015, and it should benefit from the recent rise in oil prices. Meantime, its industrial business should profit as infrastructure spending ticks higher, something Donald Trump and Hillary Clinton agree must happen.

Wall Street also thinks Roper’s near a bottom, with the average analyst estimate calling for earnings of $7.29 a share in 2017, up 10.5% from this year’s forecast. For once, I agree.

Prudential, Roper and Discover are all great companies. But if you buy now, it will still be a long time before the 0.7% to 3.3% yields you lock in come close to the 7.0%+ payouts you’ll need to retire without touching your capital.

That’s less than your local Starbucks barista makes! And for that paltry amount, you’re exposing your nest egg to a lot of risk.

Too many advisors are steering investors into situations like this, which is why I put together my no-withdrawal portfolio. As the name implies, it delivers reliable 7.4%, 8.0% and 9.4% yields right out of the gate, letting you retire on dividends alone and never have to tap your capital.

Its sounds like a pipe dream, but it’s easier than most people think. One thing you can’t do is rely solely on blue chips, because they just don’t pay enough. Simply click here to learn how to build your own no-withdrawal portfolio and get the names of my 3 favorite high-income plays for 7.4% to 9.4% yields.