4 High-Yield Landmines to Avoid at All Costs

The stock market’s up, so yields are down. And while there are still some generous payers available, be careful – some are paper tigers that will probably suffer this year.

That’s exactly the danger that’s facing four enticing high-yielders (yielding up to 20%!) that I’ll discuss with you shortly.

Since stock prices generally follow their payouts higher, it’s important to remember the opposite also happens. When dividends get cut, shares get crushed.

I’ve warned readers about Frontier Communications (FTR) and its dangerous dividend for years now. Hopefully investors listened to me, because those that didn’t lost “two ways” – they lost their yield and they lost their capital:

The Danger of Dividend Cuts 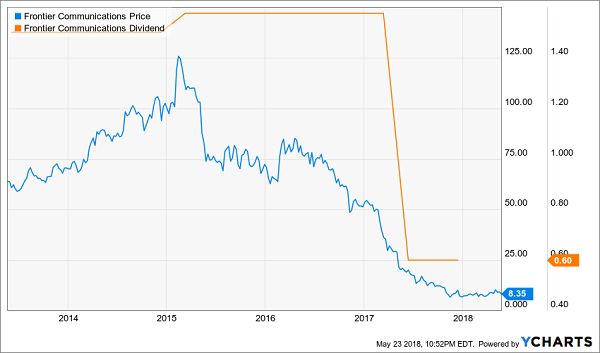 Frontier’s 2017 dividend cut – as well as its 2018 dividend suspension – are just one cautionary tale. The telecom’s debts from buying Verizon’s (VZ) wireline business, as well as a shrinking customer base, eventually forced FTR’s hand. Declines came, then a cut to the dividend, followed by even more declines … and eventually the payout was wiped out altogether.

The following four stocks yield anywhere between 7% and 20%, and all of them are potentially toxic to retirement accounts in one way or another, whether it’s plain-vanilla underperformance, or a serious risk of an eventual dividend cut.

Preferred stocks are a great source of safe, stable yield that trade more like bonds than stocks. But they’re far from a guarantee of riches, and some funds just flat-out get them wrong.

At a quick glance, SPFF isn’t all that different from other preferred funds. It holds a basket of preferred stocks, a majority of which come from financial institutions such as Wells Fargo (WFC) and Deutsche Bank (DB). That’s par for the preferred course. It’s even better in one significant way: yield. SPFF’s 7%-plus output is among the best in the space.

But this is a small portfolio of just a few dozen preferred issues, and it’s very top-heavy, with nearly a quarter of the fund’s assets dedicated to the top five holdings alone. Also, the fund is hyper-focused on yield – so much so that it delves into not-so-stellar preferreds to do so. More than two-thirds of the fund is invested in junk-grade preferreds, and it has been even riskier in the past. The small number of holdings helps amplify the effect of poor performances from any one issue.

That has led to a history of underperformance against even some of the most mediocre competition in the space. 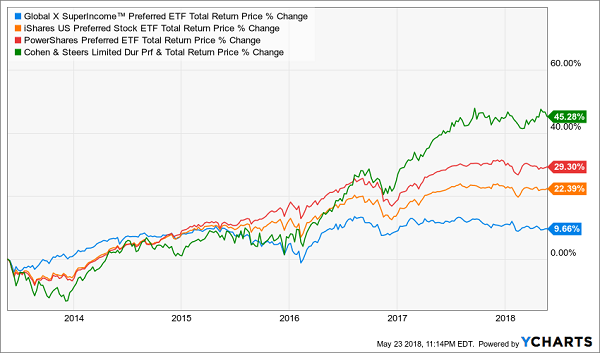 The aforementioned Frontier isn’t the only telecom that has gotten taken to the woodshed in recent years. While big telcos like AT&T (T) and Verizon (VZ) remain stable players, regional players such as CenturyLink (CTL) are having a difficult time.

CenturyLink is a Louisiana-headquartered telecom that provides services such as home high-speed internet, TV and phone, as well as business and government communications services, across 37 states. In fact, in terms of lines served, it’s actually the No. 3 telecom behind Verizon and AT&T.

Some bulls are touting a turnaround story for CenturyLink due to its acquisition of Level 3 Communications, which admittedly did have a big impact on Q1’s top line. CTL reported a 41% year-over-year increase in revenues to $5.95 billion. But that’s a natural effect from a bolt-on acquisition, and that number in fact missed estimates of $5.96 billion. Meanwhile, higher expenses dragged on the bottom line, which dropped from 30 cents per share in the year-ago quarter to just 11 cents.

CenturyLink at least is dredging itself out of the old wireline business and positioning itself more into high-speed internet and business communications. But it pays out a dividend that it has not been able to cover with earnings for years. And while the picture is a little better when looking at the dividend versus its cash generation, it’s still a tight fit that ensures the payout at the very least won’t expand – and still may be a cut risk if the company itself can’t organically grow.

CenturyLink’s (CTL) Dividend Has Been Stretched for Years 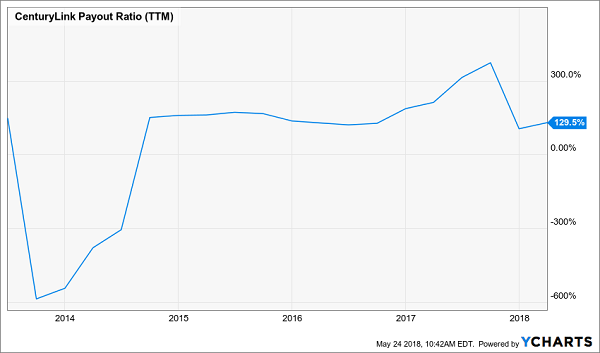 Government Properties Income Trust (GOV) is a REIT that, as the name suggests, owns 108 properties in 31 states and the metro D.C. area, and leases them out primarily to federal and other government tenants. Roughly 90% of the company’s rental income comes from governmental entities.

You’d think that government tenants would translate into stability, but at the moment you’d be wrong.

It’s not a pretty picture elsewhere. First-quarter FFO shrank from 56 cents per share to 55 cents, and same-store net operating income fell 1.2% year-over-year. The company is selling assets in an attempt to fix its balance sheet, and while AFFO still is enough to cover the dividend, that figure is shrinking while its payout remains the same.

Government Properties Income Trust (GOV) Is Drowning in the Swamp 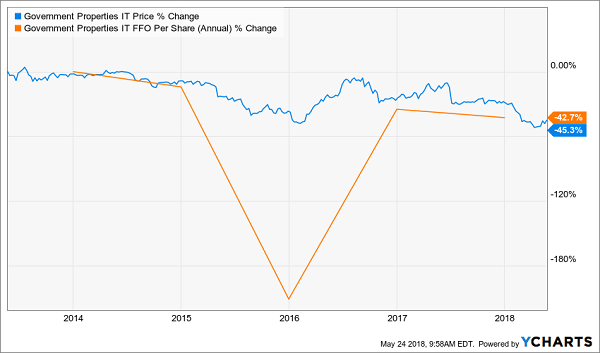 There’s no hard-and-fast rule on what constitutes a “dangerously high” yield, but I think it’s safe to say that anything yielding around 20% or more should be looked at with a skeptical eye.

CBL & Associates is a retail-focused REIT that specializes in suburban town centers. At first blush, this isn’t the worst place to be in retail – rather than being a pure play on stores, its properties also boast dining, entertainment and even health & wellness businesses.

Still, its locations appear far from immune to the troubles plaguing the broader retail space. The company saw adjusted funds from operations shrink from $2.41 per share in 2016 to $2.08 per share in 2017. That’s plenty of room to cover its 20-cent quarterly dividend, but about that payout – it’s about 25% lower than the last time I discussed CBL.

Despite being able to cover its then-26.5-cent quarterly payout with AFFO, CBL & Associates slashed the dividend last year amid declines in its core operational metric, sinking occupancy and lowered full-year guidance. For the full year, same-center net operating income declined 2.9%, “driven by revenue declines of $20.9 million primarily due to lower occupancy and rent reductions related to tenants in bankruptcy.”

It’s difficult to say that CBL is necessarily a dividend cut risk given that, again, it’s generating about double the AFFO needed to cover it. But it already cut back once under a similar circumstance, and the REIT clearly isn’t cleaning up its mess. 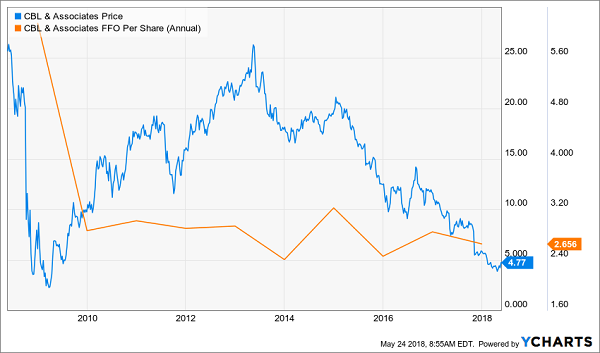 If you’re looking for high income, don’t reach and buy these dividend dogs today. There are better bargains to be had, for secure 7% to 8% yields with upside and monthly payouts to boot.

Like These Plays: The 8 Best 8% Dividends with Big Upside to Buy Today

Most Wall Street spreadsheet jockeys say we investors can’t have both the income and safety of bonds and the upside of stocks. We have to choose, or allocate, or whatever.

They’re wrong. They don’t realize that the nine bond funds in my Contrarian Income Report portfolio have delivered average annualized returns of 23.9% (including dividends)!

My three top picks today are poised to continue the tradition. These funds are a cornerstone of my 8% “no withdrawal” retirement strategy, which lets retirees rely entirely on dividend income and leave their principal 100% intact.

And I talk to management, because online research isn’t enough. I also track insider buying to make sure these guys have real skin in the game.

Today I like three “blue chip” closed-end funds as best income buys. And wait ‘til you see their yields! These “slam dunk” income plays pay 8.5%, 8.7% and even 8.9% dividends.

If you’re an investor who strives to live off dividends alone, while slowly but safely increasing the value of your nest egg, these are the ideal holdings for you. Click here and I’ll explain more about my no withdrawal approach – plus I’ll share the names, tickers and buy prices of my three favorite closed-end funds for 8.5%, 8.7% and 8.9% yields.