Most stocks that pay meaningful yields today do so because their stock prices are cheap. Their dividends are being paid from earnings that aren’t there.

Big oil is a big dividend trap. A low payout ratio – the percentage of earnings a company pays out to investors – is generally a good thing. Until that number turns negative, that is.

Meanwhile Chevron (CVX) and Exxon Mobil (XOM) – paying 5% and 3.9% respectively – are, to their credit, making money. But Chevron’s payout ratio has ballooned to 94% over the past year, and Exxon’s has increased to an uncomfortable 61%. Considering that these ratios were below 35% for most of the last decade, income investors should be wary. 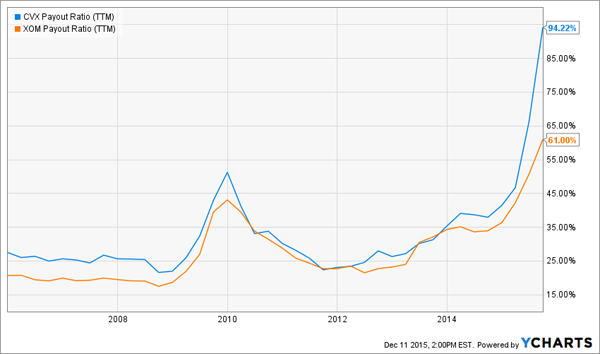 Chevron CEO John Watson says that paying a dividend is his number one priority. He may be able to achieve this – but it’ll be at the expense of all other business priorities.

I haven’t recommended a utility to my subscribers in nearly two years because the valuations became too rich (which made the yields too low). The Utilities Select Sector SPDR ETF (XLU) fell 8.8% in 2015, and the sector now looks better than it did entering last year.

But that’s not saying much – XLU pays just 3.7% today. It’s paid more for most of the time since the financial crisis. 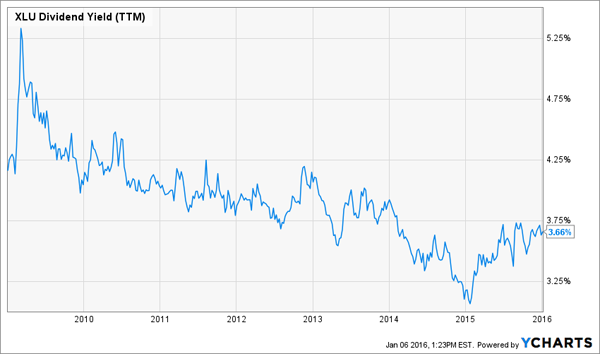 Anyone who “reaches for yield” in this sector will be risking his or her annual dividend and then some if the sector continues to pull back. Utilities probably grind sideways at best. You can find higher yields (and more upside) elsewhere.

Junk bonds pay more, but they’re in free fall. The SPDR Barclays High Yield Bond ETF (JNK) shed 12% over the last 6 months – almost double its annual payout. Wait until that falling knife hits the ground before you try to pick it up.

Putting the “JNK” in Junk 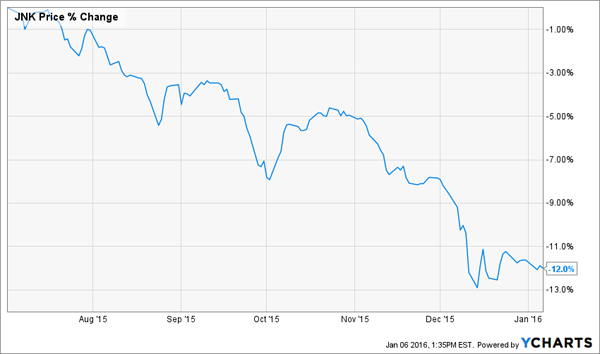 I like municipal bonds here… but I don’t quite love them like I did a few months ago, when they were cheaper (and paid more). “Muni bonds” are issued by states, cities, and counties to raise money for capital projects.

Every few years, “first-level investors” lose their minds and worry that perfectly safe municipal debt will go unpaid. To date they’ve worried for nothing, as only 0.17% of muni bonds defaulted in 2014. Their emotional swings give us good buying opportunities.

Unfortunately for us, cooler heads are prevailing and these issues aren’t the bargain they were in mid-2015. The muni bond fund I recommended to our subscribers just 5 months ago has already delivered a total return of 6.2%. That’s great for those who bought then – but if you’re looking to put new money to work now, I’d wait for the next pullback in munis.

Fortunately, I have some better places for you to put new income-focused money right now. Let’s talk about each…

Many closed-end funds are now trading at double-digit discounts to their net asset values (NAVs). Doubleline Capital founder and famed bond guru Jeffrey Gundlach recently told CNBC that buying a fund trading at a 15-20% discount is “sort of a no-brainer.”

Reason being, you’re getting $1 worth of assets for just 80 or 85 cents. That’s free money for us calculated second-level thinkers. All we need to do to collect it is buy these issues on sale, wait for the discount to close, and collect monthly yields of 0.5% or better while we wait.

Closed-end fund discounts because they’re clear contrarian indicators. The more investors dislike a strategy at the moment, the greater the discount they demand. The irony being that most people love chasing recent performance, which means they’re most inclined to sell a loser at the moment it’s most likely to turn around.

That’s exactly what I found with the most recent pick we added to our Contrarian Income Report portfolio. It’s trading at a 17% discount to NAV and pays a whopping 9% yield. It’s a rock solid play that investors tossed away in a “dumb-money panic.”

You can get the name of this pick and story behind our research here. But first, let me share my other favorite sector with you…

Year-to-date, the S&P 500 is already down nearly 5%, but REITs are faring much better. Plus, they usually pay higher dividends than regular stocks, as they can avoid income taxes if they pay out most of their earnings to their investors.

The Vanguard REIT Index Fund (VNQ) doubled over the last seven years, but it lost 3% last year. Investors worried that Fed Chair Janet Yellen will raise rates to the point that everyone will look to safer vehicles (like Treasuries) for yield.

As you can see from our tour of the 2016 income universe, that’s not even close to being the case. Other investors are coming around to this reality as well, as VNQ gained back 5% in the fourth quarter. It still boasts an attractive yield by historical standards – it’s highest this decade, in fact – thanks to last year’s selloff.

VNQ’s 3.9% Yield: Its Highest This Decade 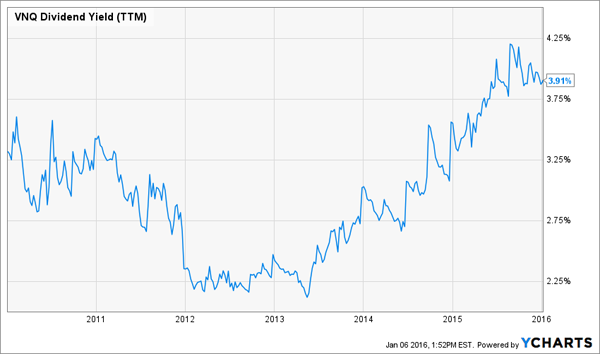 These yields are better than you’ll find in utility stocks, but a 3.9% yield isn’t quite enough to get excited about. That’s OK, because there’s one batch of REIT stocks paying 6% or higher – and growing those payouts every year (and in one company’s case, every single quarter).

My favorite REITs operate in the booming healthcare market. There’s a bull market in elderly Americans unfolding, and it will run for at least two or three decades. Here’s what driving the America-is-getting-older trend:

The Bull Market in Healthcare Will Continue for Decades

The longer everyone lives, the more likely it is that they’ll need increasing levels of care. It’s a good place to be a landlord, and should continue to be for decades, regardless of what happens to interest rates.

My three favorite plays pay yields of 6.3%, 7.2%, and 7.6% today. And all three companies are increasing earnings and their dividends annually. Anyone who buys today will see a 10%+ yield on their initial capital in just a few years.

This is the best time to buy them is right now, thanks to the interest rate panic of 2015. Click here and I’ll share the name and ticker from each, along with the unique system that I used to uncover them.