Most people are chasing big dividend payers right now in this “2% world” we live in. Meanwhile, a small group of “hidden yield” stocks are quietly handing smart investors growing income streams PLUS annual returns of 12%, 17.3%, or more.

Let’s talk about how to find these stocks, and bank 12% returns or better every single year, by following a simple two-step formula.

See, everyone wants dividend stocks with good current yields. It’s easy to scan a newspaper or financial website and pick out the stocks that are paying 3%, 4%, 8% or whatever number you might consider “good.”

Yet that’s NOT the right way to pick dividend stocks.

The best time to buy a dividend grower is anytime. But we can tip the odds in our favor even further when we buy at moments like these – when the share price is due to “catch up” to the dividend.

Which brings me to step 1 of our 12% return formula…

The “efficient market” is always slow to adjust to higher dividend levels. Folks who scan the papers are looking at trailing yields. They’re not considering next month’s payout increase, which is likely not yet priced into the stock quote.

Which means we should start our search for 12% by considering companies set to hike in the next month or two. Here are seven:

It wasn’t too long ago that investors and pundits were talking about Microsoft (MSFT) as an old, no-growth tech company whose highest potential was in its dividends. But under the leadership of Satya Nadella, who took over in February of 2014, Mister Softee has looked downright spry, almost tripling the broader market with a 92% gain.

Microsoft has grown its dividend at a CAGR of just more than 11% over the past half-decade, though it did slow down last year to a high-single-digit bump. We’re hoping MSFT is a bit more generous this September, when the venerable tech company is set to deliver another payout hike.

Can Microsoft (MSFT) Shell Out a Better Hike This Time? 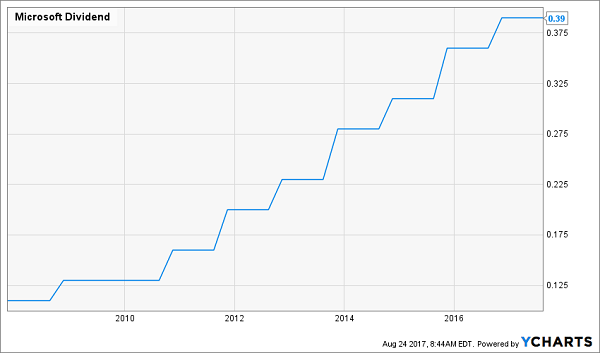 How many times has Wall Street seemingly given up on McDonald’s (MCD), with worries about changing consumer tastes and an increasingly health-conscious customer nagging the Golden Arches? The answer? The same number of times McDonald’s has punched back with yet more initiatives and global growth, sending shares to fresh all-time highs. That’s where MCD is perched today, with shares in the midst of a 70% run since September 2015. While the media has widely covered the company’s addition of all-day breakfast, less ballyhooed but certainly just as important have been a revamped menu under CEO Steve Easterbrook – who took over in 2015 – as well as a refranchising push.

McDonald’s has been sitting on a mid-single-digit average dividend growth rate for the past five years that has been fairly consistent over that time. Expect a similar bump from its quarterly payout of 94 cents per share sometime in September.

While we often extol the virtues of Eaton Vance’s (EV) closed-end funds, it’s not often that we talk about the investment management firm itself. Eaton Vance offers several lines of mutual funds and CEFs, not to mention separately managed accounts. All told, the company boasts nearly $400 billion in assets under management. Business has been good, albeit not great, over the past few years, stellar over the past few years, with profits recovering in 2016 after a deep drop in 2015. Enthusiasm for the stock has been unbridled, however, with shares recently recapturing their pre-crisis highs.

Dividends have expanded by mid-single digits over the past five years – nothing to scream about, but nothing to cry over, either. Investors can expect much of the same this September, which is when EV typically announces its annual dividend raise.

International tobacco giant Philip Morris (PM) was the subject of one of the most laughable intraday moves in recent history, with the stock briefly plunging about 5% on June 28 before recovering completely within minutes. The cause? An announcement by the FDA that it’s planning on lowering cigarettes’ nicotine content to “non-addictive” levels. The problem? Philip Morris doesn’t operate in the U.S. – Altria (MO) made sure of that when it spun off the international division back in 2008.

Philip Morris isn’t in the clear, of course. Increasingly tight smoking policies across Europe and Asia threaten the long-term security of the tobacco industry. Nonetheless, PM shares have raced ahead by more than 25% in 2017, and hit all-time highs earlier this year. More good news should be on the horizon, with Philip Morris typically hiking dividends sometime in September. Here’s hoping this year’s raise isn’t as chintzy as 2016’s 2-cent, 2% bump.

Philip Morris (PM) Needs to Open Up Its Wallet 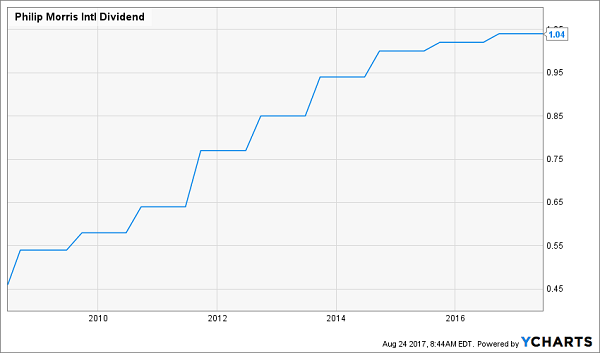 The oil slump of 2014-15 caused some very real dividend drama with Dividend Aristocrat Chevron (CVX), as the company didn’t actually improve its quarterly payout in 2015. The only reason the oil titan kept its Aristocrat status was because the four distributions of $1.07 in 2015 were enough to beat 2014’s annual payout, which included one quarter at the previous $1-per-share dividend. CVX finally earned its keep in late 2016, but just barely, upgrading its quarterly checks by a mere penny per share – a sub-1% hike.

Last year’s oil recovery has spilled back out once more in 2017, and Chevron is plenty weak for it. In fact, analysts don’t even expect CVX to make enough this year to cover its dividend. Nonetheless, Chevron has seemingly moved heaven and earth to maintain its Aristocrat status, so when the company announces its next distribution (likely in October), expect it to be higher … but meagerly so.

Kimco Realty (KIM) boasts that it’s one of North America’s largest publicly traded owners and operators of open-air shopping centers. While that’s true, in 2017, it’s probably most advisable not to advertise any connection to retail whatsoever.

Nothing doing about that, of course. This real estate investment trust (REIT) is a retail play, and Wall Street knows it. That’s a large reason why KIM shares have been thrown out with the rest of the brick-and-mortar bathwater, off more than 20% year-to-date. Still, Kimco’s mostly grocery-anchored properties have been solid this year, boasting high occupancy, and the company keeps squeezing more net operating income from its tenants.

Kimco’s dividend hikes have hovered around the 6%-7% range over the past few years like clockwork. However, Wall Street is bracing for another weak year from Kimco, so when October rolls around, we could see a less generous hike out of this yield play. 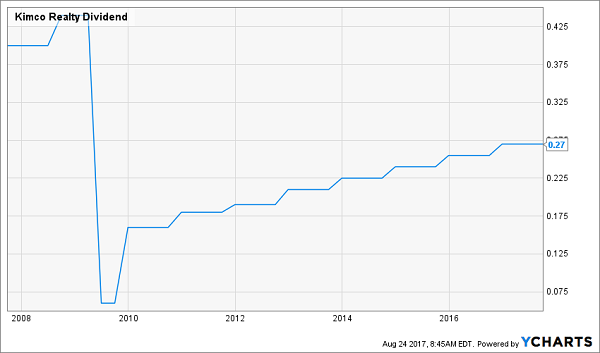 Our next potential hiker is Lexington Realty Trust (LXP), but file this one under “maybe.”

Lexington Realty Trust is a net-lease REIT with 186 properties (most of them single-tenant) across 38 states, spanning office, industrial and retail.

Shares have been stuck in neutral for years, with LXP virtually unchanged between 2011 and today, meaning investors’ main source of gains have come from the dividend. However, income growth has stagnated, too.

Like Chevron, LXP actually shifted its dividend into “neutral” in 2015, failing to hike the quarterly distribution but technically boasting an annual increase due to one lower payout in the previous year. Lexington Realty’s dividend then returned to growth mode in 2016, getting a 1-cent boost that came out to about 6%.

Because of LXP’s willingness to forgo a quarterly hike in 2015, I’m not counting this as a lock. But if generosity does strike the company, we should know about it in September.

In my experience, accelerating dividends present a “problem” to Wall Street analysts. These guys and gals project everything linearly, and their spreadsheets literally break when payouts soar at a faster and faster rate.

Let’s take data center landlord CoreSite (COR), one of my Hidden Yields recommendations. The firm actually started “accelerating” its dividend back in 2015, when it increased its payout by 26% (an acceleration over the previous year’s “mere” 20% boost):

Investors who bought CoreSite the day it declared that increase enjoyed 54.9% gains in just seven months. You can see the stock price took off as its current yield was steadily bid down by new investors (showing, once again, why we buy when the relative yield is high): 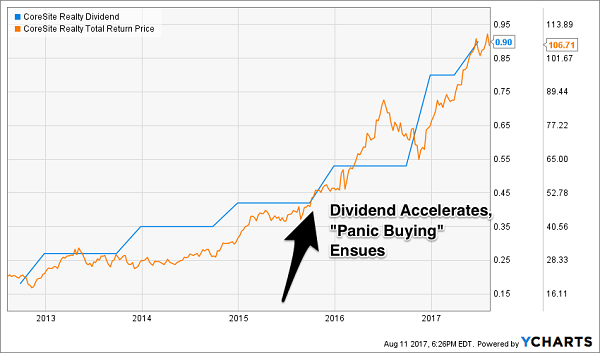 As you can see, there have been several opportunities to buy this stock for 20%, 30% and even 40% annual returns. And we’ve timed two of them on the dot using the techniques I shared with you today.

Right now, at this very moment, there are seven in particular that I think you should consider buying. These dividends are growing fast and beginning to accelerate. Soon, you’ll be reading about them in mainstream financial rags – so I’d buy them right now, while they are still under the radar (and cheap with respect to their upcoming payout growth).

These 7 firms stand to do well no matter what the broad market does … regardless of what happens in Washington … and irrespective of interest rate trends.